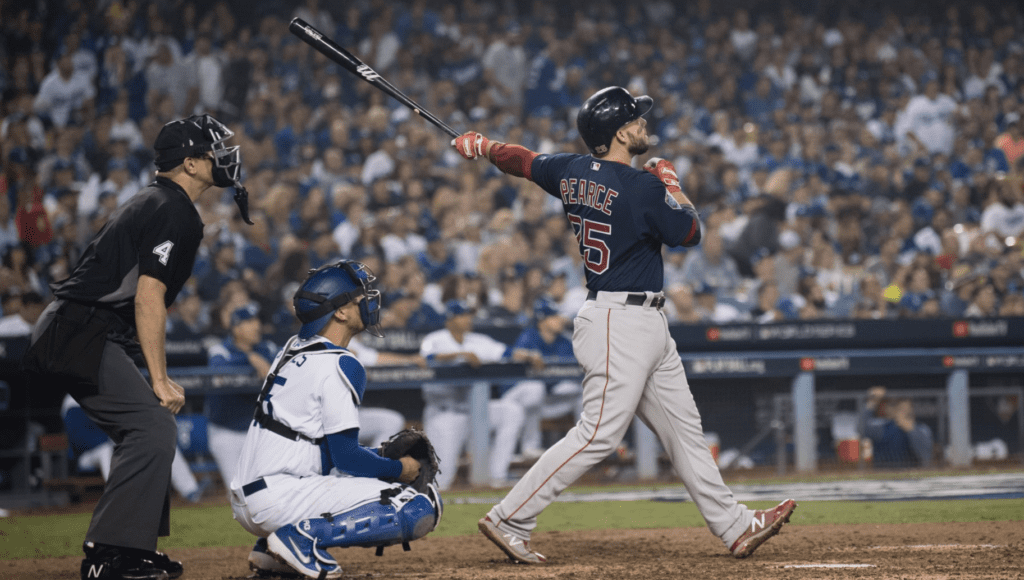 LOS ANGELES — Another night, another surreal game in the Hotel California that is Dodger Stadium in the 2018 World Series. And now the Red Sox could leave town with the World Series trophy on Sunday night.

Rafael Devers pinch-hit single with one out in the ninth capped a comeback from 4-0 down in the seventh inning as the Red Sox beat the Dodgers, 9-6, before a stunned Dodger Stadium crowd and put the Red Sox within one game of their fourth World Series crown since 2004.

Pinch-hitter Mitch Moreland put life into the Red Sox with a 3-run homer in the seventh and Steve Pearce had the game-tying homer in the eighth and added a 3-run double in the ninth for insurance and a 4 RBI performance.

There were nervous moments in the ninth as Craig Kimbrel allowed a 2-run homer to Kike Hernandez and a single to Justin Turner. But Devers turned in a sensational play to nab Manny Machado, blowing a bubble down the line. The game ended when Kimbrel got Cody Bellinger to fly out.

They have a chance to close it out with David Price on the mound Sunday night in Los Angeles in Game 5. The Dodgers counter with Clayton Kershaw. Alex Cora announced a late change after the game to Price from Sale, whom Cora said was physically fine. It was Sale, moments before Moreland’s homer, who fired up the dugout like David Ortiz did in Game 4 of the 2013 World Series.

Alex Cora, who made a controversial decision to leave Eduardo Rodriguez in the game in the sixth inning, had his fortunes take a major turn late. He pinch hit Rafael Devers for his second catcher of the night, leaving Blake Swihart to catch the ninth. Devers came up with a clutch single up the middle that scored Brock Holt to break a 4-4 tie.

With the Red Sox trailing 4-0 entering the seventh inning, Moreland connected on a mammoth 3-run homer to make it a one-run game. Sale, the Game 6 starter, started to fire up his Boston teammates, reminiscent of David Ortiz’s charge to his teammates in Game 4 of the 2013 World Series. The Red Sox would tie the series and go onto win the crown in six games, closing out at Fenway Park.

One inning after Moreland’s homer, it was Kenley Jansen giving up a game-tying homer for the second straight night, this time to Pearce.

What had been a Dodger Stadium filled with hysterical fans hoping for a 2-2 tie in the Series suddenly turned into a cavern of nerves for another night.

On a night when Dennis Eckersley surprised Kirk Gibson with cameo as Gibson was about to throw out the ceremonial first pitch, it was a current Dodger that sent the masses into pandemonium. Eckersley took the mound before the game and sent Gibson to the plate to reprise Gibson’s famous game-winning homer in Game 1 of the 1988 World Series, the last time the Dodgers captured the World Series.

Cora allowed tiring left-hander Eduardo Rodriguez face Yasiel Puig with runners on first and second and two out and Matt Barnes ready in the bullpen.

Rodriguez offered up a 3-1 fastball that Puig launched 439 feet to the left field pavilion bleachers that sent the 54,400 in attendance into full-blown hysteria, gave the Dodgers a 4-0 lead and prompted an angry glove slam to the mound from Rodriguez. It would be the final batter of the night for Rodriguez, making his first career postseason start.

But that wasn’t the only decision up for questioning in the fateful sixth. With Rodriguez entering the sixth having allowed just two hits on 80 pitches and Joe Kelly already warm, Cora allowed his lefty to try to work out of a bases loaded jam with one out. The decision nearly panned out as Cody Bellinger grounded to Steve Pearce, who threw home for the second out. But Pearce was screened from Christian Vazquez’s throw by Bellinger running down the line and Justin Turner scored for a 1-0 Dodgers lead.

Rich Hill, despite drilling counterpart Eduardo Rodriguez in the right elbow with a pitch in the third, held the Red Sox hitless through three innings.

When Rodriguez reached base in the third inning, he clearly did not want to be running the bases. Mookie Betts grounded a slow chopper to Justin Turner at third. Turner, realizing he had no chance at Betts at first turned to look at second base, where Rodriguez wasn’t even in the picture. He was trotting at half-speed down to second and Turner easily made the force out. Instead of runners at first and second and none out, the Red Sox had one out for Andrew Benintendi. The Red Sox left fielder popped out to shortstop Manny Machado and Steve Pearce followed with a fly out to left to end the inning.

Rodriguez was stingy in his own right, allowing just one hit through three. He then yielded a leadoff single to Justin Turner to open the fourth. But he followed that by fanning Manny Machado on a 3-2 pitch, struck out Cody Bellinger looking and popped up Yasiel Puig to end the fourth at 67 pitches.

The Red Sox finally recorded a hit off Hill with one out in the fifth when Christian Vazquez singled to left. Two pitches earlier, he had his second near-miss on home run bid when his drive down the left field line bent left just in front of the foul pole. In the third, he drove Chris Taylor to the warning track.

Rodriguez had a 1-2-3 fifth inning and was finished after five shutout innings the day after he came out of the bullpen in the 18-inning marathon. He was the first pitcher since Firpo Marberry with the 1924 Washington Senators to start a World Series game the day after coming on in relief. Rodriguez showed no ill effects. After a 24-pitch first inning, Rodriguez settled down to finish with five strikeouts and one walk in 80 pitches.

After Rodriguez’s meltdown in the sixth, the Red Sox had a big 2-out response from pinch-hitter Mitch Moreland. His 437-foot titanic homer to right-center off Ryan Madson, with Xander Bogaerts and Brock Holt aboard, cut the deficit quickly to one, 4-3.

But while Cora had his bumps in the sixth, Dodgers manager Dave Roberts pulled Rich Hill with one out and a runner on first in the seventh. He went to lefty Scott Alexander. He walked Brock Holt. Ryan Madson was brought on to face pinch-hitter Moreland, who crushed the game-changing homer.