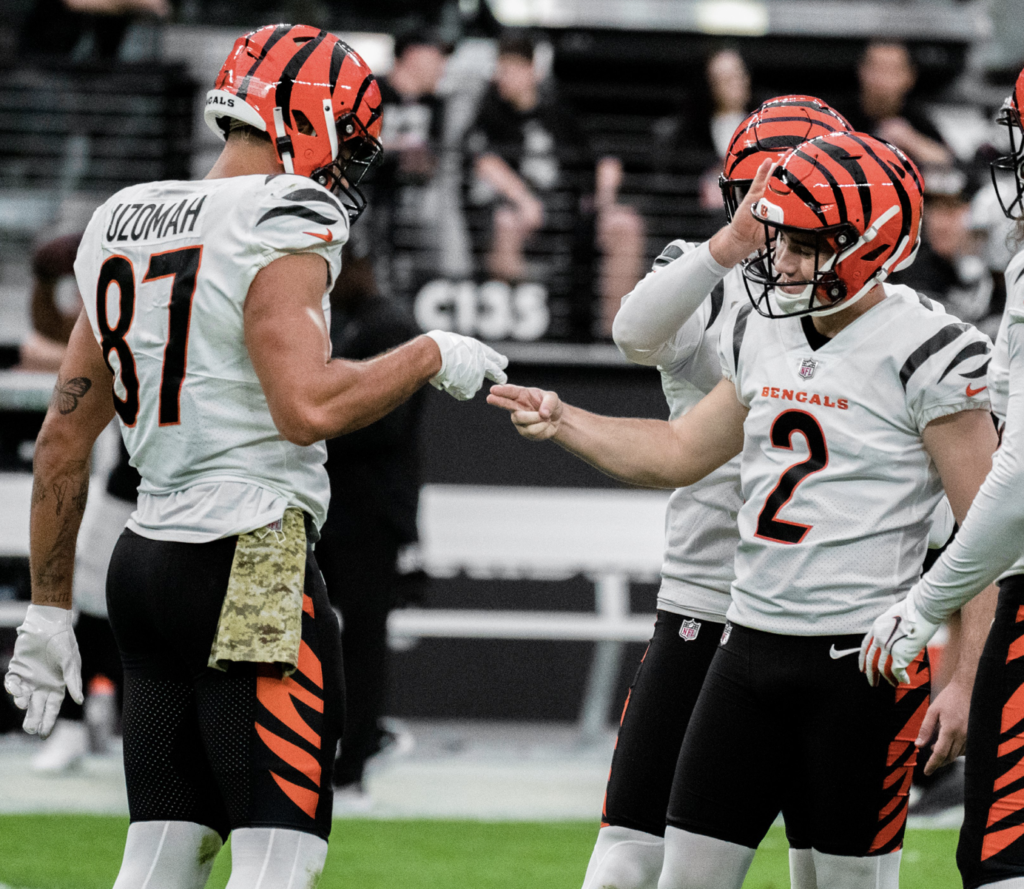 LAS VEGAS — On their first-ever trip to Vegas, the Bengals came up money against the Raiders.

Evan McPherson tied an NFL record with three field goals of over 50 yards and finished with four while Joe Mixon reached the end zone twice as the Bengals held off the Las Vegas Raiders, 32-13, Sunday at Allegiant Stadium.

Mixon, who reached the end zone for the seventh straight game, finished with 121 yards on 27 carries.

Joe Burrow took a beating but managed to complete 20-of-29 passes for 148 yards and game-sealing touchdown in the fourth quarter to Ja’Marr Chase.

Eli Apple also had an interception late in the fourth quarter to clinch Cincinnati’s sixth win. The Bengals improve to 6-4 while the Raiders fall to 5-5. The Bengals now look ahead to the Steelers next Sunday at Paul Brown Stadium.

The game began with another implosion from the offensive line. After picking up a first down on a Burrow scramble, the Bengals again faced third down. But this time, the offensive line collapsed and allowed a trio of Raiders to get in Burrow’s face, with Yannick Ngakoue sacking Burrow at the Bengals 37 and forcing the fumble.

Safety Dallin Leavitt returned the fumble to the Bengals 9, where he was tackled by Tee Higgins. The Bengals defense held and forced the Raiders to settle for a 26-yard Daniel Carlson field goal and a 3-0 lead.

The Bengals were able to respond, thanks to something that would become a theme of the first half – a Raider penalty. The Raiders had the Bengals stopped at the Cincinnati 43 but Ngakoue pushed Burrow to the ground needlessly after an incompletion. The personal foul kept the Bengals drive alive long enough for the Bengals to reach the Raiders 38, where the drive stalled.

Evan McPherson was true from 54 yards and the game was tied, 3-3. It was McPherson’s fourth field goal in five tries this season from 50 yards or longer.

The Bengals offensive line struggled badly to keep the Raiders defensive line out of Burrow’s face and Burrow took several vicious hits in the first half, including consecutive ones on back-to-back plays from Maxx Crosby on Cincinnati’s final drive of the first half, the last of which he fell on Burrow’s left knee. Burrow winced leaving the field but stayed on the sideline studying his Surface and did not seek treatment in the tent. He started the second half.

Facing third-and-inches at their 36, the Bengals ran a jet sweep to Ja’Marr Chase that lost three yards and the Bengals punted to open the second quarter.

The Raiders countered with a drive to the Bengals 29 but had to settle for Carlson’s second field goal, from 47 yards, and a 6-3 lead.

The Bengals finally mounted an extended drive on their next possession that was greatly enhanced by a pair of critical Raider penalties. On third-and-12 at the Bengals 47, Burrow was sacked. But Quinton Jefferson was called for offsides. On third-and-7, Burrow hit Boyd for 14 yards and a first down.

Then with the Bengals third-and-11 at the Vegas 25, Burrow threw to Boyd for three yards. But corner Brandon Facyson, who got away with an apparent pass interference in the end zone on Ja’Marr Chase, was called for lowering his head and drilling Boyd in the facemark with the crown of his helmet.

That set up Joe Mixon’s run of 11 yards off right tackle, his seventh straight game with a TD run. The play was highlighted by the downfield block of Stanley Morgan Jr. on Facyson at the Raiders 7. The block was reminiscent of Chase’s downfield block on Mixon’s TD run in Detroit. The score put the Bengals ahead for the first time, 10-6.

Mixon celebrated with Boyd, Tee Higgins and Morgan by mimicking rolling dice in the end zone.

The Bengals held the Raiders on their first drive of the second half and the Bengals capitalized with a long drive but it stalled when Burrow took a sack on a delayed blitz. But McPherson salvaged the drive with a 53-yard field goal, making him five-of-six this year from 50-plus, as the Bengals increased their lead to 13-6.

McPherson tied an NFL record when he became the 13th player in league history with three field goals of 50-plus yards when he connected from 51 yards with 13:17 left to put Cincinnati up, 16-6.

But the Raiders, thanks to three big pass plays from Derek Carr, came charging right back. Carr hit Darren Waller for 25 yards to midfield and 31 yards to the Bengals 19. On the third play of the drive, Carr lofted a perfect pass to the back corner of the end zone to another tight end, Foster Moreau, who beat Logan Wilson in coverage. The touchdown brought the crowd back into the game and cut the lead to 16-13 with over 11 minutes left.