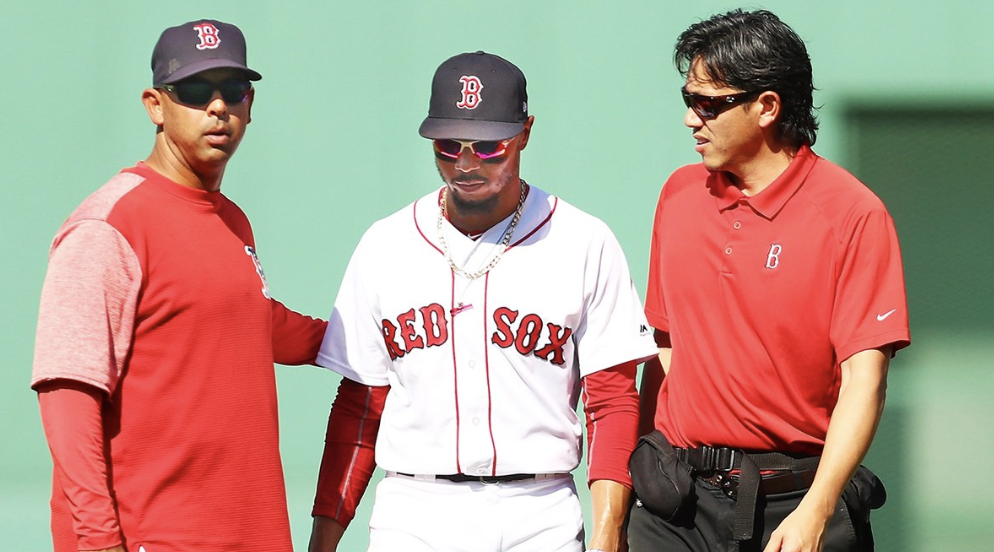 BOSTON — The Red Sox will now hold their breath on Mookie Betts.

Almost as if he sensed something like this was coming, Alex Cora spoke at length before Sunday’s game with the Mets about the art of resting his best players to preserve them for the postseason.

Then in the sixth inning, Betts left the game with a strain of his left side when he was unable to fully wind up and throw home on a fly ball to right field that turned into a sacrifice fly.

“He will be evaluated further,” the team announced during the game.

After the game, Cora said he spoke with Betts, who insisted the strain is not serious and that Betts will travel with the team to New York, likely serving as DH on Tuesday while J.D. Martinez will play right field.

“J.D. will be happy about that,” Cora said after Sunday’s 103rd win of the season, a 4-3 triumph that lowered Boston’s Magic No. to 2, with three games set for the Bronx coming up this week.

While Austin Jackson was crossing home plate, it was apparent that Betts couldn’t wind up and unleash his usual throw that would’ve nabbed the runner easily. As the run-scoring play was reviewed, Betts remained in right field on one knee trying to stretch his back. Betts would be seen by trainer Masai Takahashi and Cora and leave the field.

Cora, as A.J. Hinch’s bench coach with the world champion Astros in 2017, paid close attention to how the team handled Jose Altuve’s scary collision with Teoscar Hernandez early in the season and when he got hit on the left forearm with week left in the ’17 season.

Now, with his team destined to set a new franchise record for wins (106), he has something much bigger on his plate.

“Like Holt early in the season, he started playing a lot and he gets hurt,” Cora told me. “Maybe it’s on me because he was a backup player, not playing that often and all of a sudden, he’s playing every day. I should know that because I was a utility player. Until you’ve lived it, as a manager you have no idea. He was very hot. He was swinging the bat well in Toronto. He was running the bases, running a lot and all of sudden he pulls a hammy.”

“Raffy (Devers), he comes off the DL and I put him in a hit-and-run, thinking about Sandy, not thinking about the guy at first. It’s still a learning process. It’s been great. I do feel without last year, it was going to be tougher. I lived through a few things, like the Altuve thing, running around for x-amount of days, getting through each day for five straight days, and thinking you know what, he’s not there, regardless of whether he’s hot or not. He’s a small guy, kind of like with Mookie.”

“When Mookie is swinging the bat well, it’s awesome. But at the same time, you’ve got to be careful because if you ride him until he goes 0-for he might be 0-for-12 because he didn’t get the proper rest. It’s been a learning experience.”

Turns out the Red Sox can beat superior pitching, even without two of their biggest stars.

In Sunday’s outing against Jacob deGrom, statistically the most dominant pitcher in baseball this year, Alex Cora presented a starting lineup without J.D. Martinez and Xander Bogaerts.

In their place were Brock Holt at short and Steve Pearce as DH. Holt drilled his fifth homer of the season, a no-doubter off deGrom to turn a 1-0 game into a 3-0 lead for the Red Sox, a lead that lasted until the bullpen leaked two runs in the sixth and another in the seventh.

With the Red Sox on the verge of clinching the American League East for the third straight year and home field advantage throughout the playoffs, the priority is not scoreboard watching. The simple priority is to make sure the Red Sox are rested and ready to go in the postseason. Sunday’s development with Betts makes this a little more suspenseful.

“We’ll start to see this a little bit more throughout the week,” Cora said. “Obviously, we haven’t finished the (regular season) job. We still have some games to play. We’ll take advantage of the schedule, keep them fresh and off their feet.”

Do Cora treat the upcoming games against the Yankees (3 this week and 3 to close the season) any differently because of their significance to the Yankees?

“Nope. I owe it to our team. Whatever we have to do to be close to 100 percent wherever we go, that’s what I have to do,” he said. “You guys know how I feel when our regulars don’t play, it’s still a good lineup, capable of scoring a lot of runs. … We’re still going to play to win. We’ve got to rest some guys in the bullpen and we have to take care of our starters and we go from there.”

“Relievers will always (tell me they’re) available, regardless. I think I learned last year that it’s very important to take care of them. Take care of the players. Two days is better than one day off. We get a lot of information as far as innings that they’ve played, the workload.”

Now, the Red Sox just need to hope and pray Mookie Betts is good to go for the postseason.