Nathaniel Hackett is Headed To Denver – Could Aaron Rodgers Be Next? | BetOnline.ag

Will Aaron Rodgers follow his offensive coordinator to Mile High? 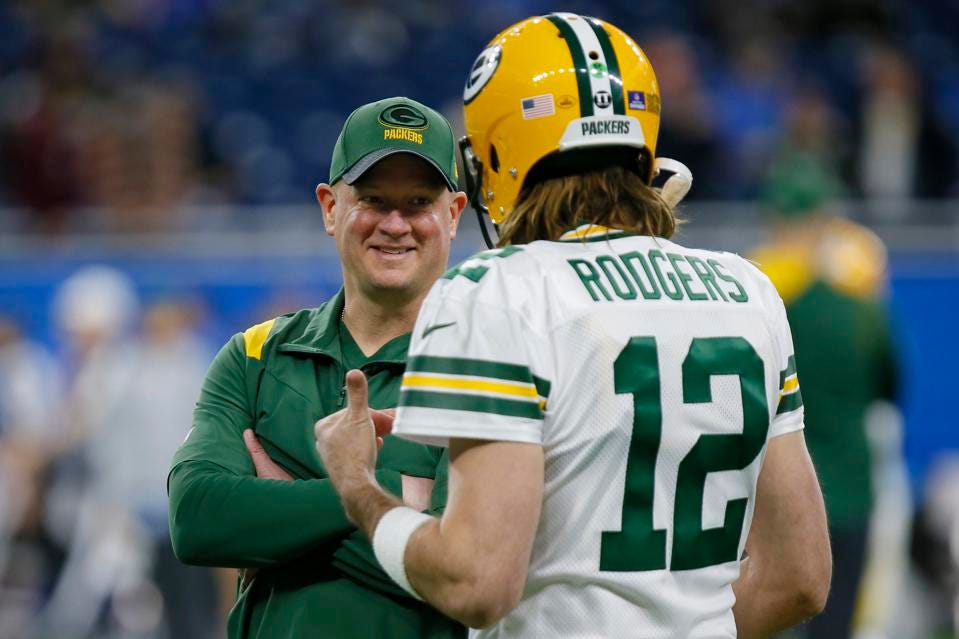 The Denver Broncos have officially hired former Green Bay Packers offensive coordinator Nathaniel Hackett to be their next head coach.

The 42-year-old had stops in Tampa Bay, Buffalo, and Jacksonville before finding a niche with Matt LeFleur and Aaron Rodgers in Green Bay. He has been with the Packers since 2019.

OFFICIAL: We’ve agreed to terms with Nathaniel Hackett to be our next head coach. 😎

Speaking of Aaron Rodgers – could Denver be his next stop? With reports of Rodgers ready to find a new home in 2022, there has been an abundance of speculation that he could follow Hackett to Denver. Rodgers is quoted saying, “There’s nobody in the building that brings me more joy… than Nathaniel Hackett. I hope he doesn’t go anywhere… unless I do.”

According to BetOnline.ag, Denver is the clear-cut favorite to be Rodgers next landing spot. Here is the full list of odds:

Aaron Rodgers Next Team (If Not Packers)

I think Denver would be perfect for Aaron. Sure – it may be a gauntlet right now with several young quarterbacks to get through, and playing against Patrick Mahomes, Justin Herbert, and Derek Carr for six games may not be ideal, but the Broncos are a “win now” team that was just a coach and quarterback away last season.

They have some pretty good weapons on offense. Jerry Jeudy, Cortland Sutton, Noah Fant, and Tim Patrick aren’t slouches, and if the reports are true that Rodgers wants to bring Davante Adams with him wherever he goes, that room could become lethal very quickly.

Report: Aaron Rodgers has “told people in confidence” he wants free agents Davante Adams and Marquez Valdes-Scantling wherever he plays next season, per @TonyPauline

Broncos owner John Elway has not had success drafting quarterbacks (see: Paxton Lynch, Drew Lock, etc.). What he was done however was convince Peyton Manning to come to Denver after he was cut by the Colts. The Broncos went to two Super Bowls under Manning – winning one.

Could Elway do the same thing with Rodgers? Only time will tell. It would certainly help his legacy after giving up general manager duties. I think this is the obvious landing spot for Rodgers, and could even be worth laying (-150).