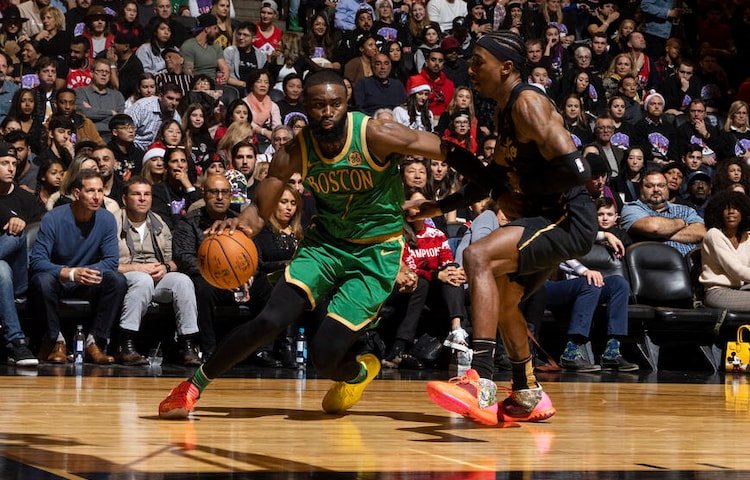 Jaylen Brown made a statement Wednesday afternoon in Toronto.

On the day the NBA showcases its very best, he made his case for why he’s an All-Star this season and did it on the league’s regular-season grand stage under the national television’s spotlight on Christmas Day. Brown was masterful.

After the Celtics took a 55-47 lead into halftime, his 16 third-quarter points closed the door on the Raptors as Boston earned its first win in Toronto since 2015. Brown led with a game-high 30 points on 10-of-13 from the floor, including 5-of-7 from deep.

He torched the Raptors by draining a handful of open 3-pointers, scoring in transition and from the free-throw line — where he netted 5-of-6. He also added six rebounds and four assists while making history in the process, while the Celtics topped the Raptors, 118-102 — their fourth consecutive win.

“I was just trying to be efficient,” Brown said Wednesday after the win. “I think that was the goal — just being aggressive but trying to make every shot. No wasted motion. It was good to get a win here on Christmas. I’d never won here, period, so it was great to get one.” (Celtics.com)

Brown became the first Celtics player since Bill Russell (1958) to score 30 points on Christmas Day, he also could be one of the most overlooked All-Star candidates in the Eastern Conference — a narrative that should turn into a thing of the past between now and February. At the rate Jaylen is soaring, seeing him make his first All-Star team is starting to look like a foregone conclusion at this point.

Alongside Kemba Walker (22 points), there were moments in the third quarter when Brown was the best player on the floor. He weaved through defenders, got to his spots with ease and knocked down contested looks as the Celtics’ lead continued to increase heading into the final frame. It eventually ballooned into a 22-point advantage.

Alongside Karl-Anthony Towns, he’s also the only one shooting over 50 percent from the floor. Towns and Brown are both shooting at a 51.4 percent clip.

Still, Brown’s numbers and list of game-defining performances are hard to ignore. Averaging 24.5 points, 7.2 rebounds while shooting 58.6 percent from the field, Brown has been a key catalyst throughout the Celtics’ current four-game winning streak.

His outside touch — where he’s drained a combined 12-of-26 in the last four contests — continues to heat up month after month. After shooting at a 37.5 percent clip in November, Brown is shooting over 43 percent from behind the arc this month. His Christmas Day performance marked the second time this month he’s scored five 3-pointers in one game, Brown shooting touch doesn’t seem like it’s going to be cooling off anytime soon.

He’s come a long way from the rookie he used to be, Brown’s fourth season in the NBA has seen him reach new heights.

He also couldn’t have picked a better day to go off for 30 points. It wasn’t only in front of the eyes of the national public on Christmas Day, Wednesday was also the first day fans can submit their All-Star ballots.

Brown and Walker led six Celtics players in double figures, including Gordon Hayward, who returned from his foot injury and filled his stat line with 14 points, 6 assists, 5 rebounds, a pair of steals and one block. Enes Kanter (12 points, 11 rebounds) notched his second double-double of the season and Daniel Theis added 13 points.

Fred VanVleet (27 points) and Chris Boucher (24 points) combined for 51 points to lead the Raptors, while Kyle Lowry added 14 points and 8 assists. However, it wasn’t enough to overcome the Celtics’ dominant third quarter, where they outscored the Raptors, 33-22 to cushion their double-digit lead.

Boston will look to stretch its streak to six when they host the Cavaliers at TD Garden Friday night.