Could the Patriots Trade Up in 1st Round for a Quarterback? 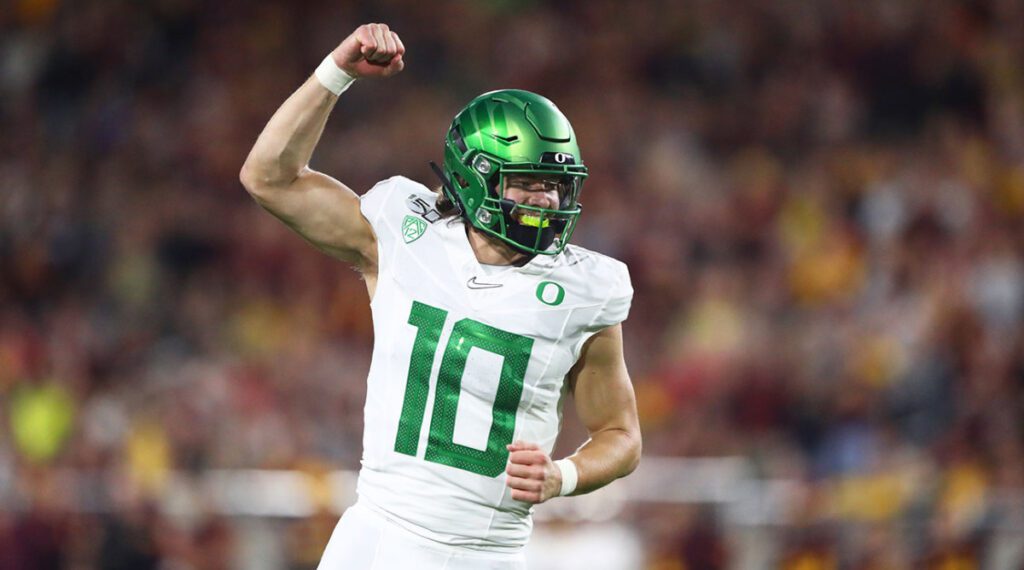 The Patriots are in an unenviable situation with the quarterback position next season.

On the one hand, Jarrett Stidham turned heads last preseason and made noticeable strides as a rookie that has confidence brewing inside Gillette Stadium for the 2019 fourth-round pick.

We wrote an extensive film review that highlights Stidham’s best qualities and outlines a path for him to franchise quarterback status, which is there for the taking if he puts it all together.

On the other hand, what if Bill Belichick isn’t sold on Stidham’s abilities to lead the dynasty in the post-Brady era?

Since 2000, only two teams have selected more quarterbacks in the draft than the Patriots while rostering the best for the past 20 seasons, so Belichick is never satisfied at the position.

If the Patriots can upgrade, then they should. And if they aren’t all-in on Stidham, there’s precedent for a first-round trade-up where New England is in the first round.

We aren’t saying the team doesn’t believe in Stidham, nor are we necessarily advocating for a trade up in the first round for a quarterback, but we should consider every angle.

And Stidham immediately becomes a valuable trade asset if the Pats go in a different direction.

There are plenty of case-studies gone wrong, but both the Chiefs and Texans are recent examples of prosperous trade-ups, leading to a Super Bowl in Kansas City this past season.

In the 2017 draft, the quarterback-needy Chiefs and Texans both traded up from the mid-20s to select Super Bowl MVP Patrick Mahomes and two-time Pro Bowler Deshaun Watson:

CHIEFS GET: NO. 10 OVERALL (PATRICK MAHOMES)

TEXANS GET: NO. 12 OVERALL (DESHAUN WATSON)

Looking back on those trades, neither Kansas City nor Houston gave up a king’s ransom to move up, with future first-rounders, and in KC’s case, the 91st overall pick in the deal.

Although White and Ward are great, both the Bills and Browns would much rather Mahomes and Watson quarterbacking their teams than their current signal-callers.

There are two candidates for the Pats, if they start to slide, that could be trade-up options, and both are better pro prospects than Stidham.

We are assuming that Joe Burrow and Tua Tagavolioa will be top five selections, which is a safe bet. Burrow already has a Bengals jersey, and Tua will not fall past the Miami Dolphins at five.

Love is the definition of boom-or-bust, his 31 big-time throws and 26 turnover worthy plays both ranked in the top five in the CFB at opposite ends of the spectrum, per Pro Football Focus.

On the surface, it’s easy to say that Belichick wouldn’t be interested in a turnover-prone quarterback, but the Utah State supporting cast made life difficult for Love last season.

Love saw a seven percent increase in pressure rate from the 2018 season to 2019 and threw into tight windows more frequently than any passer in this class due to his receiver talent.

For the Utah State offense to produce, Love was forcing tight-window throws regularly, and he deserves credit for bouncing-back quickly from mistakes with a short memory.

When you hear big-armed quarterback, most assume that Love would lack touch on his throws, but the first thing that stood out was that his repertoire goes beyond the typical fastball.

Along with arm talent, Love also has a superb over the top release that’s extremely quick.

Love will take a little off and put touch on the ball down the field just as easily as throwing a rocket into a tight window. On the play above, Utah State floods a cover-three zone on the boundary at the top of the screen. The outside receiver runs a clear-out, while the outside slot fades into the sideline. Love perfectly floats the ball over the second level and drops a dime into the bucket with enough pace to beat the corner peeling off his man to the spot for a completion.

Against LSU last season, Love had a difficult time with turnovers (three picks) and did not play well overall. But he still made some great throws and did his best against a superior opponent.

On this play, Love shows off a knack for working off-script when the play breaks down and his ability to throw on the move with accuracy and touch. The Tigers defense is man coverage with two deep safeties (two-man). With nobody open, Love goes to roll out of the pocket when he sees his receiver break free deep downfield, and he drops it on the bucket. Love gives off Mahomes vibes with plays like that, which fair or not, is where the comparisons come from to the reigning Super Bowl MVP.

Now let’s get to some of the fastballs where Love drives the ball downfield.

We’d like to see Love get through his progressions faster and not stare down targets, but he seems to understand where his answers are based on the safety rotations in the coverage.

Here’s an audio breakdown of Love knowing how to defeat a cover-four structure, manipulating a second-level defender out of the passing lane, and throwing a strike.

Love can also drive the football with ease on far-hash throws, which are excellent barometers of arm strength. As the defense drops into a single-high coverage, Love knows he’s got a matchup along the far sideline with his receiver running an out route. Love throws a bullet across the field with perfect ball placement to move the chains and set up the offense inside the ten.

To his right, the offense is running a spot concept. The route combination is a “spot” route to five yards, a flat or arrow out of the backfield, and a vertical to clear out the coverage. Love is reading the flat defenders’ drop. If he drops with the running back, he works to the sit route. If the flat drops underneath the sit, the read is to the back. This time, the flat defender goes with the back and the inside linebacker keys on the spot route. Instead of throwing it right to the linebacker coming over, Love gives a little pump fake, waits for his receiver to clear the linebacker, and uses that lightning-quick release to hit the open man.

Scouting quarterbacks through a Patriots lens, those that have Love’s skill set usually don’t grade-out well, but he has a much better feel for the position and all-around arm talent than others like him.

Another quarterback with a cannon, Herbert’s draft stock stumbled slightly due to an underwhelming final season in Eugene last fall.

Herbert is at his best ripping the ball down the seams and on drive throws outside the numbers, but despite his athleticism, he needs to be in-rhythm and kept clean to succeed.

Herbert has the highest accurate pass rate on passes of 20-plus yards from clean pockets in the 2020 class and produced the third-highest grade on horizontal throws outside the numbers.

But Herbert was also 124th out of 129 qualified quarterbacks in negatively-graded play rate under pressure, according to PFF. He sometimes panics in collapsing pockets, lacking poise.

Back to the positives, though, turn up the volume for another audio breakdown on one of Herbert’s screamers up the seam for a big-time throw after the deep safety takes the cheese.

And in case the stats weren’t enough, here’s some of that pinpoint accuracy outside the numbers. Herbert knows he has one-on-one on the outside and places the ball perfectly away from the defender on a hitch route just past the sticks to convert on third down.

Herbert also does well carrying out schemed fakes and double-moves with his receivers.

Here, the outside receiver simulates a tunnel screen working underneath towards the quarterback. The defense is playing a match cover-three, meaning they’re playing vertical routes like it’s man coverage. Herbert and the receiver get the outside corner at the top to bite, and he’s got his tight end wide open behind the defense for a touchdown.

On this play, Herbert is working a slant-and-go at the bottom of the screen. The defense is cover-two, with two deep safeties, but it looks like the corner is playing more of a man technique. Herbert gives a hard pump fake and gets the corner to drive on the slant while the deep safety gets duped into thinking the ball is out, and Herbert drops it in for a score.

Along with arm talent, Herbert is intriguing due to his capabilities to operate and stay on-time within the structure of a scheme.

Ideally, Herbert would run an offense that combines quick passes with a vertical attack, as the Ducks mixed in timing routes and screens to keep him in-rhythm then loaded up the deep balls.

The Patriots offense is more about horizontal stretches than vertical routes, but things can evolve, and New England always loves vertical shots up the seams to their tight ends.

Herbert and Love might not strike you as Pats fits based on their question marks with processing speed, downfield accuracy, and in Love’s case, turnovers, and Herbert’s, pocket poise.

However, all prospects have flaws that get exposed before the draft. For Stidham, a tendency to leave clean pockets and accuracy beyond ten yards were significant concern for evaluators.

But every successful quarterback needs a baseline of physical tools to combine with a natural feel for the position. Although arm talent can be overrated, there’s a standard for success.

Although Stidham has several excellent qualities, we would welcome a trade up for either Herbert or Love as well.