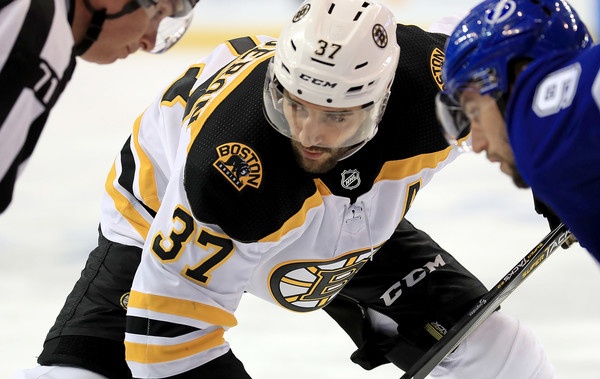 Tonight is the NHL Awards in Las Vegas, Nevada. The show starts at 8 p.m. ET and can be seen on NBCSN. Representing the Boston Bruins tonight as nominees will be Patrice Bergeron for the Selke Trophy (best defensive forward) and Bruce Cassidy for the Jack Adams Trophy (best coach).

Bergeron is a Selke finalist for a record seventh consecutive year and is going for his fifth win, which would pass Bob Gainey for the most since the award was presented in 1978. Bergeron is not as convincingly the winner this time around, but he certainly makes a strong case. At this point, it really should be renamed the Bergeron award because he embodies everything the award stands for.

He’s up against some tough competition with Philadelphia Flyers forward Sean Couturier and Los Angeles Kings forward Anze Kopitar. Despite Couturier having a +34 rating, Bergy should win this award. Only way he doesn’t is if the games he missed end up getting held against him.

If this was any other year, Cassidy would win the Jack Adams. In his first full year as head coach of the B’s he overhauled the offensive system and was able to successfully implement young guys into the lineup. With a record of 50-20-12 (112 points), Cassidy coached the Bruins to fourth in the NHL standings.

However, there’s no way that Gerard Gallant doesn’t win this award. Gallant took an expansion team of misfits to the Stanley Cup Finals. He coached his team to a 51-24-7 (109 points) record which was good enough to win the Pacific Division.

Here are predictions for all of the other awards from me and Bruins Insider Jimmy Murphy.