NHL Draft 2018: Do the Bruins Move into the First Round? Who Will They Take? 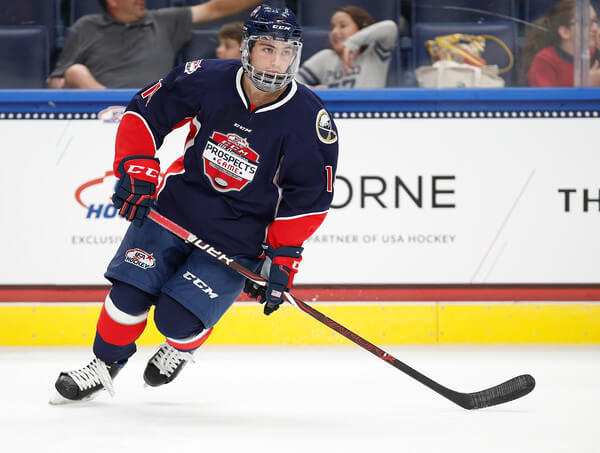 With the NHL playoffs almost over and free agency not starting until July 1st, the NHL Draft is what 29 of the 31 teams currently have as the main course on their plate.

For the Boston Bruins, the draft is not as hyped up as ones in years gone by; they traded their first-round pick in this year’s draft away to the New York Rangers back at the Trade Deadline as part of a package for Rick Nash.

In that case, the most exciting picks for the Bruins are at 57th in the second round and 77th in the third. Those aren’t picks to throw a Bruins-themed draft party around, but they’re still notable to the team’s future.

Last time the Bruins picked this late in the draft was 60th in 2013 when they took Swedish defenseman Linus Arnesson. Prior to that, it was David Krejci in 2004 as the 63rd selection.

One hit, one miss; will the third time be the charm?

This draft is looked at one that is not very good. After the top-end, highly touted talent at the top, there is a huge drop off. The Bruins will be going for value in their picks.

Nonetheless, the Bruins still would like to get back into the first round and general manager Don Sweeney echoed that at the NHL Combine last week.

“I do think it will be difficult,” exclaimed Sweeney. “But there are teams with multiple picks. You never know what some team may want to do based on where — everybody’s really had or will have coming out of this, their amateur and pro meetings, so things kind of take shape within your own team and what your teams are.”

Despite Sweeney’s words, the Bruins still probably will not move into the top 31 teams to pick. The teams that are high up and the ones that have multiple picks have been thinking about that pick all year and have been scouting relentlessly.

Also, there is a huge gap between a first-round pick and one in the late second round. It would take a staggering offer to move into the first round from the late second round. This begs a simple question: why give away unreal talent (which the Bruins have) for unproven talent in a sub-par draft? Yes it creates buzz but it ultimately wouldn’t benefit the team in the long-run.

The Bruins are still all-in on the draft. According to one source, Bruins scouts were scouting all over the continent this year. They’d like to continue the trend of good drafts.

Typically, a string of good drafts yields many good years after those drafts. The big hits picked out of these past drafts such as Charlie McAvoy, Jake DeBrusk, Brandon Carlo, David Pastrnak, Ryan Donato, Danton Heinen and Anders Bjork will make up the core of the 2020 Bruins. Those players are already making huge impacts with the team as of now.

On the flip side, a string of bad drafts creates a bottoming-out that many teams can feel either immediately or later on down the road. The Bruins have had both since the turn of the millennium.

With regard to this year’s draft, the Bruins have their eyes on filling depth at different positions. Forwards are always needed and the B’s will definitely look to pick up a right-shot defenseman.

Despite the rumors, the Bruins are not in the market of drafting a goalie. They drafted University of Maine goalie Jeremy Swayman in 2017 and in this year’s draft, the goalie crop doesn’t look to be incredible.

The Bruins are more likely to sign or trade for a pro-goalie.

Now it’s time to look at the players that the Bruins have their eyes on. According to a source, these are the six prospects that the Bruins are looking at the most to draft with their second and third round picks.

O’Brien got an invite to the All-American Prospects game in Buffalo, NY which is as rare as it gets for a high school prep star. Despite coming right out of high school hockey, his potential is incredibly high.

This past season, O’Brien scored 43 goals and 80 points in just 30 games. His skating and fast acceleration times have him as a stand-out from the rest. He has great hands and uses his speed to give himself scoring chances. He’s a right shot who can play both center and wing.

He fits the mold for a typical Bruin one source tells me. He’s hard-working, isn’t afraid to stick his nose in corners, and has a very high hockey IQ. He’s from Hingham, Massachusetts which would play well to the local appeal in Boston.

Overall, O’Brien will most likely fall somewhere in the second round. He’s one notch below the high-end talent from the USHL and the United States program in Michigan.

Jenkins spent last season with the Saginaw Spirit of the OHL and collected 20 goals and 44 points in 68 games. He had a big impact on the team and one that was enough to get him noticed for this year’s draft.

He has good size on him and he moves really well. He’s 6’2″, 194 lbs and uses all of it. From that description he sounds like a typical Bruin.

However, according to a source, Jenkins should be a first-round talent but isn’t due to a lack of vision on the ice and hockey sense. Pair that up with his skating skills needing improvement and you have someone who could fall to the Bruins at 57th.

Jenkins’ motivation is in question due to his lackluster efforts on defense and back-checking.

If the Bruins can motivate him, then fine. They’d be getting a very talented player. But from the many questions in his game, he doesn’t look to be a player who would fit into the intricate culture of the Bruins.

When he was 15-years-old, Jake Wise was the talk of the scouting world. Some were comparing him to be the next Jack Eichel and the next prodigy to come out of the states.

As time would play out, those comparisons were proven lofty and he would not live up those expectations. That’s not his fault: he can’t control who he’s compared to at a young age.

Despite that, Wise has turned out to be a very respectable prospect. According to scouts, he’s a solid forward who’s not flashy but is very smart and competitive. He’s a Swiss army knife in that he can pretty much do anything asked of him on the ice.

Set to play at Boston University this year, Wise is another locally grown prospect who could have some appeal to the Boston fanbase. Wise was born and raised in North Andover, Massachusetts.

Cotter is what many would deem to be a stereotypical Bruin.

But, he’s a left-shot who plays the middle of the ice really well. He’s incredibly competitive and plays mean. He plays much bigger than his size.

According to a source, if he were 6’2″, everyone would be talking about him and he’d possibly be taken in the first round. He’s a floor player.

In the USHL this past season, he was highly coveted and helped lead his team down the stretch and deep into the playoffs. He has tremendous upside and could bring great value to the Bruins.

Now to the defensemen.

Barton is looked at as second or third round talent because he played in the British Colombia Hockey League which is Tier II. Many scouts believe one must play Tier I to be drafted high and project well.

However, the BCHL has seen the likes of Kyle Turris and Tyson Jost come out of it and succeed in the NHL. Barton is slated to pave the same fate for himself as he heads to UMass Lowell for the 2018-19 season.

Barton has great size and is a right-shot defenseman. At 6’2″ and 174 lbs, Barton understands how to utilize his big body. Along with his size, he’s a really good skater and has great ability with the puck.

When it comes to this draft, he’s a solid two-way defender and one that the Bruins are taking a look at.

Ranked #72 by NHL Central Scouting for players in North America, Regula is the real sleeper on this list. Him being picked by the Bruins at 57th would be a bit of a stretch so he’d be more primed for the third round.

Though only 17-years-old, Regula is 6’2″ and 161 lbs. He went from being a depth defenseman in the USHL to a solid defenseman as an OHL rookie. That shows a bit of perseverance from the young gun.

As a right-shot defenseman, he would provide depth at a position of need for the Bruins. In 67 games last season, Regula posted seven goals and 25 points.

His positioning is getting better and he’s improving defensively. He’s a raw talent with a lot of room left to grow. If the Bruins were to take him, there are many unanswered questions. But he’s a project and the B’s might be on the market for that.

That’s the story of this year’s NHL Draft: projects.