Nick Ritchie Reflects on Crazy 2020 & Acclimating to Bruins During Pandemic 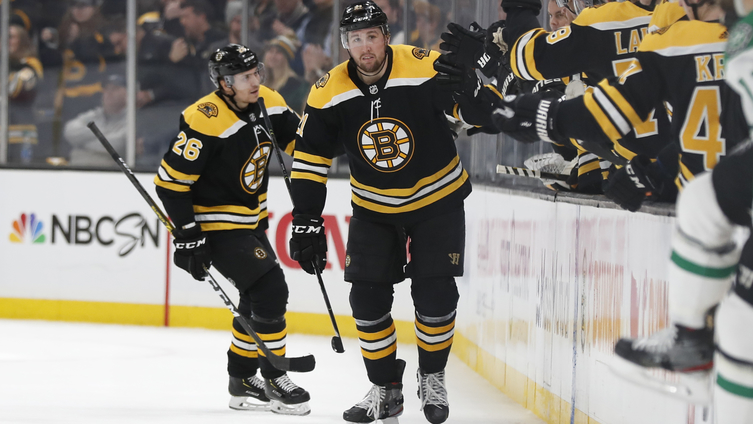 Nick Ritchie was working against a clock he didn’t know existed.

The Ducks sent Ritchie to the Bruins on Feb. 24. A large part of trades is the logistics of sending a player from one location to one usually very different. Ritchie’s was extreme, going from one coast to another.

No one knew this then, but the transaction came just weeks before the world would go into a pandemic due to COVID-19 and the NHL would put its season on pause.

“Luckily I had a lot of that figured out and scheduled to be shipped and moved before this all started,” Ritchie said in a Zoom video conference Wednesday afternoon. “It finished just as it started. I was lucky enough I didn’t have too much stuff. I just rented a condo down there so it wasn’t too hard so far as I didn’t have a whole lot of stuff. Just to ship my car over and things like that so it wasn’t too bad.”

See? Just in the nick of time.

That’s only been one instance of why there’s a high chance Ritchie’s calendar year of 2020 may be even more of a whirlwind than yours and that’s saying something.

Less than five months in, Ritchie’s year has been all over the map, starting in Anaheim, getting dealt to Boston and now staying at his parent’s place in Ontario with brother Brett due to the COVID-19 stoppage. Instead of hockey these days, Ritchie is helping out on the family farm and handling the horses.

“Yeah, it has been strange,” Ritchie said. “I started in Anaheim, was there for awhile, season was rolling along fine, everything was good. Get traded, wasn’t expecting it, didn’t know that was happening. There was a new thing that got me really excited — got me to go to the first place team. We’re kind of just starting to get going and get close to the playoffs. There’s only a month of the season left and this hit and that’s been it.

“Now I’m back at home and I never would’ve thought I would’ve been out in Anaheim at Christmas time and then back at home during this time and not playing any hockey. It has been really weird but I guess that’s life and hopefully we can get back playing soon.”

Because of the stoppage, Ritchie’s time in Boston lasted less than three weeks and only seven games, which wasn’t much time to establish any real chemistry with Bruins teammates.

He still was in the dressing room long enough to meet everyone, talk to everyone and get a briefing on the systems.

“Obviously it’s been tough where we haven’t seen the team or obviously practice or anything,” Ritchie said. “I was there for such a little time that I didn’t get to know everybody like everyone else knew everybody with me being one of the few new guys. That kind of sucked that the pause happened.”

At Zdeno Chara’s virtual town hall with season ticket holders Tuesday, he explained the team’s held a Zoom call every week for the past three weeks to catch up.

It’s been the perfect opportunity for the new guy to get to know his teammates a bit better.

“It feels like you’re back in the locker room for an hour or so,” Ritchie said. “That’s all we can do right now and it’s pretty good.”

Another aspect of joining a new team is working under new coaches. Even though Ritchie explained that changing systems isn’t “as much of an adjustment as people think”, playing for Bruce Cassidy certainly has its differences from having Dallas Eakins standing behind you on the bench.

Ritchie and Cassidy have had some contact over the pause and it’s been beneficial for both sides to get to know each other a bit more.

“He called me there a few weeks ago just to chat and see how everything is,” Ritchie said. “But I think at this time it’s rough. Right? There’s not much to talk about. Everyone’s just trying to stay healthy and get through it together. I’m sure once we see that it’s going to start coming back, the communication is going to start.

“I had a good opportunity with that before. I had a lot of talks with him and got to know him and how he coaches and the systems and stuff.”

The craziness of his 2020 has clearly been apparent to Ritchie. It’s no simple task to uproot yourself and live in three very different places throughout North America within a four-month span.

However, there is the optimistic side for Ritchie that maybe this will be beneficial for him and his career with the Bruins in the long run.

“Maybe this time off will help me as well,” Ritchie said. “The long travel, coming down from Anaheim, time change, all that stuff, middle of the season, kind of a rude awakening. Maybe it’ll help me when I get the chance to sit and think about it and come back and know that I’m a Boston Bruin and just really leave it out there.”