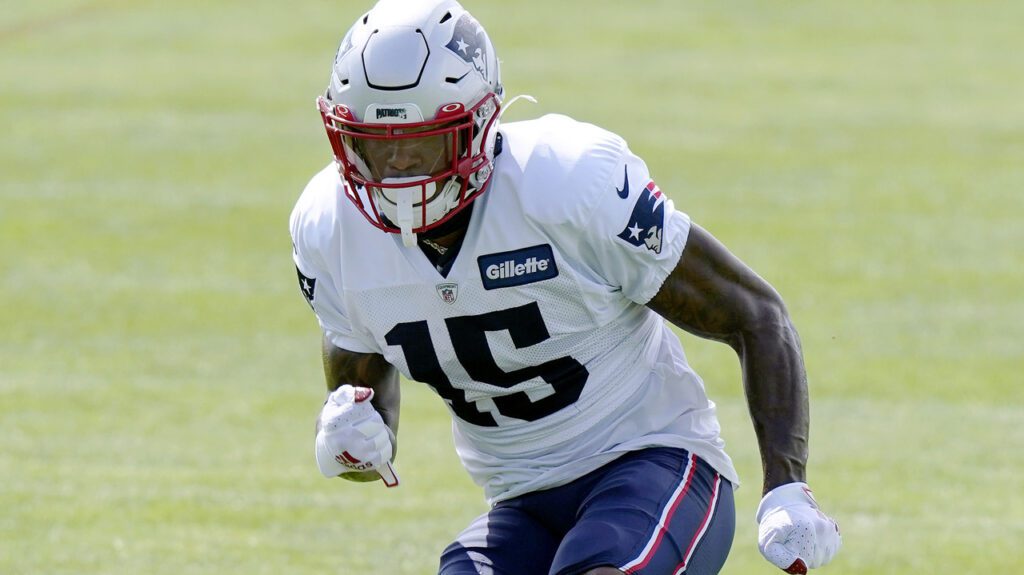 Those outside the walls of Gillette Stadium were clamoring all offseason for the Patriots to make a significant move to upgrade at wide receiver.

DeAndre Hopkins, Stefon Diggs, and other premier wideouts were traded, but not to the Patriots, who seem strangely confident in their current depth chart despite a limited group on paper.

Instead of selling out for a big-name receiver, Bill Belichick is staying patient and trusting his evaluation of 2019 first-round pick N’Keal Harry in hopes that he’ll turn things around.

For New England, giving Harry a chance to develop into the playmaker they thought they were getting is the move that will provide them with a consistent option other than Julian Edelman.

Based on their draft history at the position, and Harry’s struggles as a rookie, there’s reason to question Belichick when it comes to wide receivers. But, as always, there’s context to understanding Harry’s slow start.

The Pats wideout sustained an ankle injury during his rookie training camp that he played through in the Patriots’ preseason opener. Unfortunately, that made matters worse, and Harry didn’t practice again that summer and was placed on injured reserve to start the season.

Harry appeared in the final eight games of the season, amassing just 14 catches, 126 yards, and two touchdowns with another 56 yards on the ground and ranked dead-last in Next Gen’s average separation metric out of 142 qualified receivers.

After struggling to produce, the “bust” label was slapped on Harry by many in the football cognoscenti. But the Patriots still believe.

“I’m not worried about all the noise,” Harry said on Friday ahead of New England’s season-opener against the Dolphins.

“You can’t please everyone in this world, and I’m aware of that, my grandmother has taught me that. All the outside noise is something that really never phases me and really never has phased me, whether it’s good hype or bad hype, I’m going to stay N’Keal. I’ll stay the same person.”

As a rookie in a complicated passing offense with a 20-year veteran at quarterback, getting thrown into the fire and asked to produce like a first-round pick was an unfair expectation.

Now in his second season, Harry feels at ease with the playbook and more comfortable with the rigors of being a pro athlete, an adjustment that isn’t discussed enough with young players.

“I definitely feel more comfortable. For me, the playbook is one thing, and I just feel more settled,” Harry said. “This is my second year in the league, my second year being a professional athlete, and this year I feel much more like a pro than I did last year. I think just having that year under my belt has helped me take those steps in the right direction and was something that I really needed.”

In his rookie season, Harry’s limited amount of practice time in New England’s system led to 86 percent of his snaps coming at outside receiver, where his issues against press-man coverage were exacerbated by the amount of press he saw in 2019.

Harry, who moved all around the formation at Arizona State and finished his career there as a “big” slot, only lined up in the inside 35 times without registering a catch, according to Pro Football Focus.

Although it’s college and not the NFL, Harry had 73 catches, 1,088 yards, and nine touchdowns playing mostly inside for the Sun Devils in 2018, yet barely ran routes from the slot as a rookie because its challenging to learn multiple receiver spots in the offense mid-season.

Some of Harry’s limited usage inside also had to do with the personnel New England was working with down the stretch, with Edelman and Mohamed Sanu carrying the load in the slot.

Harry, who again struggles with press coverage on the perimeter, could benefit from moving inside where he’s a mismatch against slot corners, safeties, and linebackers and won’t see as much press-man.

Harry worked inside more in camp as he tries to diversify his role, and moving him around the formation more might be partially responsible for Sanu’s release, who is mostly a slot option.

The Patriots are developing Harry as an “X” receiver on the outside while using him more in the slot and incorporating schemed touches to use his ball carrying skills that were productive in his rookie campaign.

We documented Harry’s work with receiver guru Rischad Whitfield (aka Footwork King) this offseason, which focused on adding more explosiveness and a diversified release package to Harry’s game.

On those workouts with Whitfield, Harry told me, “the main goal was adding more things to my bag. Working different releases at the line, trying to be lighter on my feet, and really get going. It definitely helped a lot, and I’m just trying to find ways to incorporate it into my game.”

For Harry, working with Whitfield should hopefully unlock his downfield contested-catch abilities. By opening a pathway upfield, Harry can get corners on his back and adjust to throws such as back-shoulders or high-point fades.

Making the most out of his opportunities as a big-bodied pass-catcher is also where his new quarterback, Cam Newton, can help out, along with mentoring the young Pats wideout.

“It’s a really good connection. A lot of the time, it’s like a big brother,” Harry said of Newton. “He’s kind of guiding me through a lot of things. Obviously, he has a lot of experience in this league, so just having him there, I think throughout camp has helped me out a lot. He’s done a great job of just putting his arm around me and guiding me through this whole thing.”

The quote from Harry on Newton seems minor out of context, but it’s worth noting that Newton’s big brother role is a significant change for Harry from Brady’s disappointed dad approach.

Second-year wideouts Jakobi Meyers, and Gunner Olszweksi, along with Harry, spoke openly about the fear they had playing with Brady due to his reactions to mental errors last season; nobody wants to disappoint their parents.

Along with a more welcoming approach, Newton also has a history of working well with big receivers and wideouts with very similar skills to Harry in Carolina.

At nearly 6-foot-3, Harry fits the mold of a receiver that usually thrives with Newton. Along with improved knowledge of the playbook and more explosive movements, Harry is in a great spot.

The Patriots’ season-opener against the Miami Dolphins and splash free-agent pickup Byron Jones should be a great first test for Harry, who went up against Jones last season when he was with the Cowboys.

In that matchup, Harry caught only one of his four targets with Jones in coverage but did haul in his first career touchdown against Dallas on, you guessed it, a back-shoulder fade.

We’ll soon find out if all the work he put in this offseason pays off in real games. If it does, the big-play receiver everyone is seeking for the Patriots was in Foxboro all along.