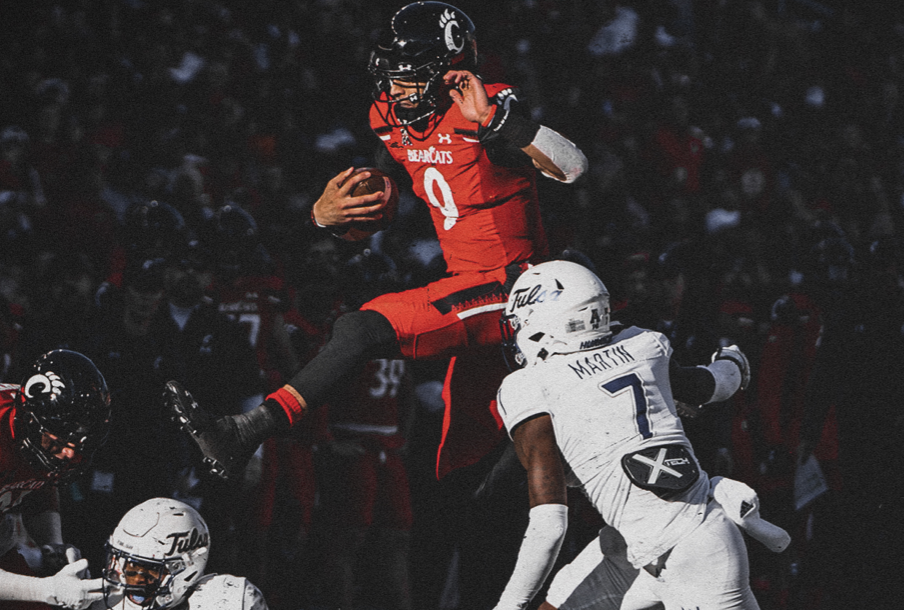 CINCINNATI — If Cincinnati was hoping to regain favor with the College Football Playoff committee with a statement win, they came up far short Saturday.

Desmond Ridder completed 15 of 23 passes for 274 yards and two touchdowns while star receiver Alec Pierce caught five passes for 113 yards and a touchdown as the second-ranked (No. 6 CFP) Bearcats escaped the Tulsa Hurricane, 28-20, Saturday on Homecoming at a sold out Nippert Stadium.

The Bearcats had to hold off three-win Tulsa, which had the ball with 5:28 left in the fourth and a chance to tie. Facing third-and-17 on the Tulsa 38, Tulsa QB Davis Brin connected with Josh Johnson for 20 yards. Two runs put the Hurricane at the UC 11 with three minutes left.

Ja’Von Hicks and Deshawn Pace stopped Josh Johnson at the UC 6 on third down and a targeting penalty was overturned. On fourth down, Darrian Beavers blitzed up the middle and Pace tackled the receiver at the two to turn the ball over to the Bearcats at their two.

But Ridder fumbled on the next snap and Tulsa recovered and unbelievably had another chance with 1:11 left and in position at the UC 3. Brin had the end zone in his sights but slipped and fell six inches short, setting up the final try on fourth down with 42 seconds left.

“No matter what, you have to find ways (to win),” Cincinnati head coach Luke Fickell said. “We just find a way to make plays. (Tulsa) found a way to get the ball back, some way, and we make four more plays. We have to come out of this saying, ‘This is a fighting group,’ and they really are. It might not be flashy, it might not be perfect. That’s what we pride ourselves on in the locker room.”

Steven Anderson took the option handoff from Brin and fumbled just as he approached the goal line, with the Bearcats Jabari Taylor recovering in the end zone for a touchback, preserving the win.

“It is kind of a blur to me right now, to be honest,” Fickell said of the final two minutes. “I don’t know how that happens. But no matter what, you have to find ways. The one thing I was disappointed with, the offense moved the football, up front did a really good job, well and I thought we did a really good job in the third and fourth quarter. There were a couple keys, we had a couple opportunities to make some plays down the field. Des threw some good balls and we didn’t make the plays.

“We turn around and we give up a lot of runs and they get the ball down to the three-yard-line, and we just find a way to make plays. They find a way to get the ball back, some way, and we make four more plays. Those are the things that we have to come out of this saying, ‘this is a fighting group,’ and they really are. It might not be flashy, it might not be perfect. That’s what we pride ourselves on in the locker room.”

Bearcats fans complained this week that their No. 6 ranking by the committee, two spots shy of the four-team playoff, was unwarranted because they had beaten Notre Dame and Indiana on the road. But that was a month ago and the “what have you done lately” nature of things is not playing in UC’s favor.

Ridder, Pierce and the defense helped pick up the slack for Jerome Ford, who suffered an apparent leg injury in the second quarter and did not return. Ford remained in uniform on the Bearcats sideline throughout the second half but without his helmet and was simply an interested bystander.

The Bearcats (9-0, 5-0 AAC), suffered through their third consecutive sluggish first half against an inferior opponent before pulling away in the second half. Tulsa fell to 3-6 and 2-3 in conference action. The Bearcats turn around and play South Florida in Tampa this Friday night before returning for their final regular season home game Nov. 20 vs. SMU.

The Bearcats jumped out to a 14-0 lead on touchdown runs of three yards from Desmond Ridder and one yard by Ford.

But even in the quick start there were warning signs. Ridder threw a pass off the left and it was off target and picked off by Tulsa’s TieNeal Martin at the Cincinnati 32. The defense picked up the Bearcats and escaped when Tulsa punted on fourth-and-14 from the Cincinnati 36.

The next time Tulsa had the ball, they started to use a hurry-up offense that seemed to put Cincinnati’s defense on its heels. Instead of throwing the ball, the Hurricane featured a quick running attack up the middle of the Bearcats defense, highlighting the talents of Shamari Brooks and Steven Anderson.

Tulsa broke on the board with a 35-yard field goal from Zack Long. His 50-yarder with 10 seconds left in the half drew the Golden Hurricane to within two, 14-12 at the break.

In between, Tulsa capped a 12-play, 75-yard drive when Shamari Brooks went in from eight yards to make it 14-9.

The Bearcats suffered a potentially season-changing injury when star running back Jerome Ford left with an apparent left left injury midway through the second quarter.

Ford, the junior transfer from Alabama, already had catches for 34 and 33 yards to go along with his 24 yards on seven carries before he left the game. The Bearcats did not appear the same without him on the field for the rest of the first half, as the team was booed for its conservative style on their second-to-last possession of the half, leading to Long’s 50-yard field goal.

“Coming out of half, we just knew we had to push the ball downfield more or get the run game
going very much,” Ridder said. “We never did get it on the edge and just take more shots, obviously, we didn’t play drop bait a lot, the intermediate stuff isn’t really there, so it was really going over the top where run the ball didn’t, maybe screens, but other than that.”

But as the second half started with Ford in full uniform but without his helmet, it was apparent Desmond Ridder was ready to pick up the slack. On UC’s first drive he connected with Pierce for 40 yards down the left sideline to the Tulsa 12. On the next play, Ridder went right back to Pierce who again reached over the defensive back for the ball and came down with his fourth touchdown of the season and a 21-12 UC lead.

The Bearcats come out firing to start the second half with @ajpierce00 making the touchdown grab. #AmericanPow6r pic.twitter.com/jWXZcmTLdo

UC’s defense rose to the occasion on fourth-and-1 from Tulsa’s own 44 and stopped Steven Anderson for no gain. Three plays later, Ridder lofted a perfect pass on a blitz for Michael Young Jr. in the end zone. Young made the catch while on his back in the end zone for the touchdown and a 28-12 lead.