‘No greater honor’ for Paul Pierce than raising his No. 34 to the rafters 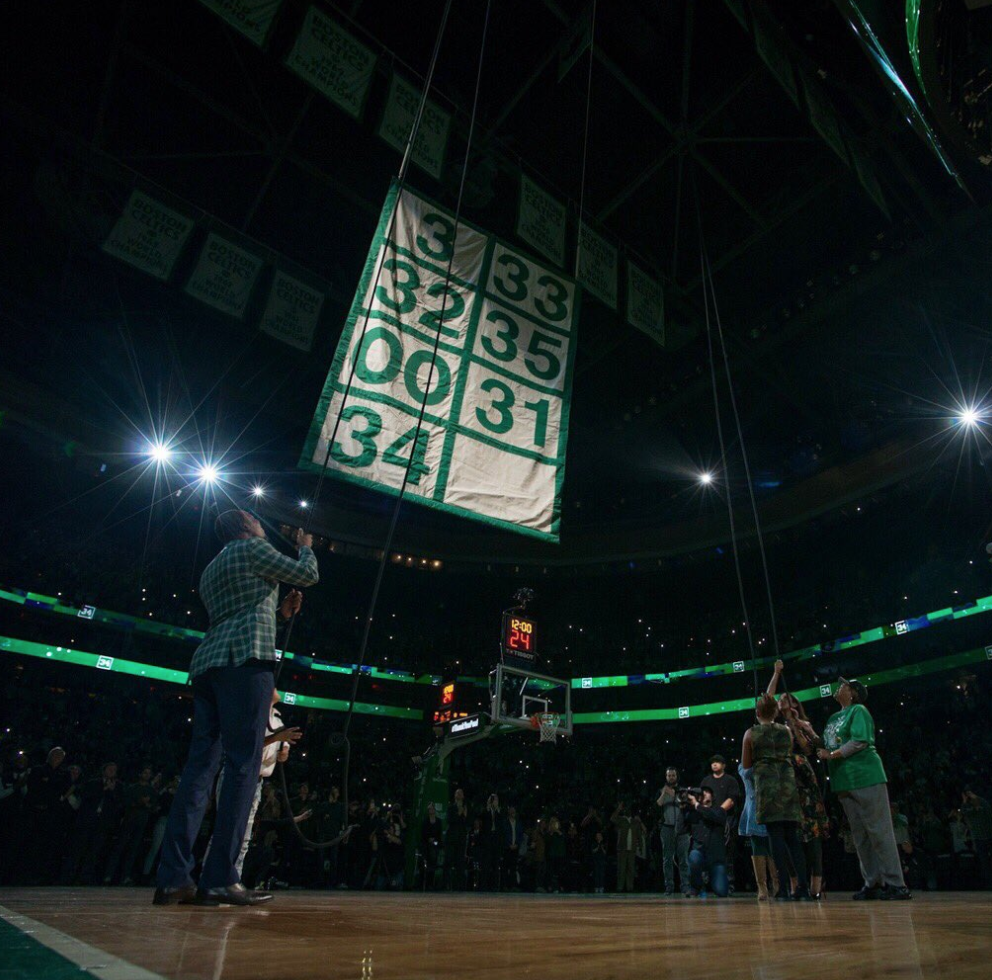 BOSTON — It was a day Paul Pierce waited an entire basketball lifetime for. And aside from his Celtics getting buried by a Cleveland avalanche and losing 121-99, the day his No. 34 went to the rafters didn’t disappoint.

For the second time he had the honor Sunday of pulling a banner up to the rafters. But instead of crying like he did in 2008, hoisting Banner 17 to the rafters, he just smiled and smiled as he became the 23rd Celtics legend to have his number hang above the parquet.

“I was thinking about the last time I pulled ropes up there I was tearing up crying and I was trying not to cry,” Pierce said. “When we raised the Championship banner that’s when it all came out, it came out bad that day. I was just trying to hold it together and I just knew that when I first saw the banner lift and I saw it straight and I saw my number there it was like man all the years I walked into the gym everyday I looked up and I saw empty spots and I saw all the other jersey numbers. Now I’m on there, now I’m on there, and that’s forever.

Take in the moment Paul, you’ve earned it. 3️⃣4️⃣ pic.twitter.com/B81uPlraT5

How much does Pierce mean that? He went as far as to say that if he weren’t elected to the Basketball Hall of Fame in Springfield, Sunday’s honor would be enough.

“When you’re forever with the Celtics, you’re forever,” Pierce said. “When I was sitting out here in the back ready to go out I was just sitting here and my hands were shaking. Originally, I had a speech, I wrote down some points, but then last minute I was just like I’m going to go out there and say what I feel and hopefully I don’t forget important names that were part of this journey. This is just a special day. If I never make the Hall of Fame or anything, to go up and make the rafters as a retired number for the Celtics that’s just enough, that’s enough for me. Everything else is icing on the cake.”

Toward the end of the 40-minute ceremony, Pierce finally began to choke up in tears, thanking the fans and what the experience meant to share with his three children.

“I got emotional when I talked about my kids because for them to just sit here, they didn’t’ get a chance to see most of my career. My daughter was born April of the year we won it, my first daughter, so they didn’t really get a chance. For them just to see their dad and how appreciated he was in the city and to be able to leave a legacy to be able to come back years down the line and say that’s my dad, my dad’s number is up there. That means a lot to me. They will one day, if they don’t realize it now, they will one day.”

Inglewood made him.
Kansas shaped him.
But he was always a Celtic and that is The Truth.#ThankYouPaul pic.twitter.com/anzr8a6QDl

Pierce related a story of this past summer when he was notified by owner Wyc Grousbeck that his number was headed to the rafters this season.

“When Wyc gave me that call this summer I was on the freeway stuck in traffic and I was like woah,” Pierce said. “After I was done like I know it could happen, but it happened so fast and I’m like wow really! A year after I’m out playing, I’m just like man I’m going up into the rafters and leaving a legacy, something that is going to be forever. Like I said when you are forever with the Celtics you’re forever.

“It means so much, it means a lot. I always tell guys with the way the NBA landscape is and how the collective bargaining agreement is and player movement all the time and I had a chance to think about it, my number could be up there without another number going up there for a long time. I think the days that you see a player playing 10-15 years for one franchise if probably over so that could be really special. Who knows.”

For Pierce, Sunday was the culmination of a 15-season legacy with Boston before being traded to Brooklyn and finishing his career with stops in Washington and the Clippers.

“I think I was a little more pissed off during draft night,” Pierce said, recalling that night in June 1998. “I was like happy I made the NBA, but I went 10 and that was the start of it. People just knew my competitive spirit. I was ticked off in going 10 and I wanted to just prove to everybody that I’m a better player, but things happen for a reason. I ended up a Boston Celtic. What are the chances. Its like hitting the lottery. I’m a top five pick, projected number two, there’s no way I’m going past five I haven’t even talked to teams past the fifth pick and I end up the 10th pick as a Boston Celtic. Just the irony in all that. Being from LA and not liking the Celtics and this is where I am. It was meant to be, things happen for a reason, it was meant to be.”

Here are some other nuggets from Sunday:

Pierce becomes the 23rd Celtics player to have his uniform number or name retired by the franchise, and the first since Cedric Maxwell’s No. 31 was retired on Dec. 15, 2003.

“Paul’s love for the game was contagious, and the talent he had along with his work ethic allowed him to be one of the greatest players of his era,” said Ainge. “I will always be grateful for the sacrifices Paul made to help the Celtics be great and am excited for him to have received this truly deserving honor.”

Pierce’s No. 34 was retired almost 10 years after he played a central role in raising the Celtics’ 17th championship banner up to the very same ceiling in 2008. Making his first ever NBA Finals appearance, Pierce averaged 21.8 points (43.2% FG, 39.3% 3-PT, 83.0% FT), 4.5 rebounds, 6.3 assists, 1.08 steals and 38.8 minutes over the course of that six-game series against the Los Angeles Lakers. He was named the NBA Finals Most Valuable Player that year, making him just the third Celtics player in franchise history to collect MVP honors in his first NBA Finals appearance (JoJo White – 1974, Cedric Maxwell – 1981).

GIFTS – As part of the ceremony, the Celtics presented Pierce with a series of gifts acknowledging his memorable Celtics career, including:

A replica of the retired number No. 34 banner, which is framed with authentic parquet flooring from the 2007-08 championship season.

A framed collage including a photo of Pierce with his 2008 NBA Finals MVP trophy, and an authentic piece of parquet flooring, etched with career accolades.

A custom, handmade stained glass backboard, featuring the No. 34 on the iconic parquet pattern, made of gold leaf with a gold-plated hoop/net combination.

As a tribute to all the memories and iconic moments Pierce created for the Celtics organization and its fans, TD Garden and the Celtics teamed up to further honor The Truth’s legacy. In what is now officially known as the “Paul Pierce Players’ Tunnel”, Pierce’s signature has been permanently etched into the home team tunnel, and will serve as a lasting reminder to the team’s current and future players of all the attributes that entail being a true Celtic.