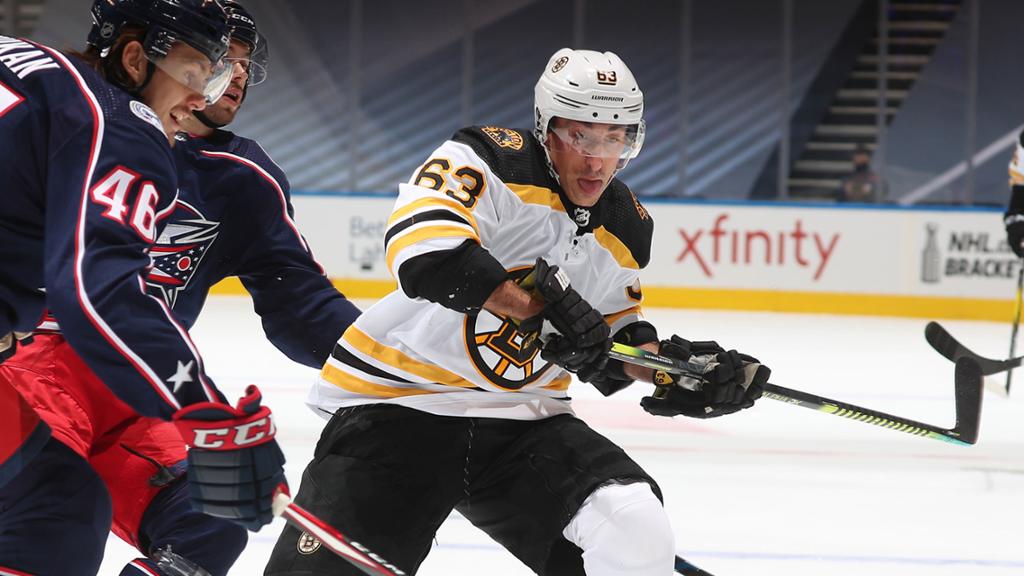 It was weird to see the Bruins playing a game in July and preparing for the playoffs with no fans in the stands. Even though it was an exhibition, it was still a hockey game and the Bruins lost 4-1 to the Blue Jackets in their first game since March 10.

The result hardly matters. Both teams have contrasting paths after Thursday night, which means both squads approached this matchup differently. Boston used the game as a precursor to the round-robin for seeding, which could be treated as glorified exhibitions. Columbus heads straight into the Qualifying Round. This was not to be a soft launch for them.

What did matter for the Bruins was individual performances and aspects of their game. It all came down to shaking off the rust that covered their play through the first 20 minutes. From Tuukka Rask, to Torey Krug, to Sean Kuraly — there was rust all over the lineup, and that was to be expected after four months off.

As the game wore on, the rust and sloppiness fell off and we saw a more accurate representation of the 2019-20 Bruins.

Here are the takeaways.

Ironically enough, the most consistent Bruins player on the ice Thursday night wasn’t one of the consistent skaters up in Boston during the 2019-20 regular season.

It was Jack Studnicka.

He looked great. From his first shift to his final shift, he looked comfortable on David Krejci’s right side and it was obvious. Jake DeBrusk was the beneficiary of a few dishes from the 21-year-old as well.

Jack Studnicka looks GREAT. Fits well with David Krejci and seems to be great at setting up Jake DeBrusk. pic.twitter.com/rIrarCbX3D

“He had some of our better chances,” Bruce Cassidy said of Studnicka via Zoom after the loss. “Was willing to go to the net, went to the dirty areas.

“For the most part, did his job, got opportunities to score. Unfortunately didn’t finish. Certainly the effort was there and liked his game.”

Here’s how the DeBrusk-Krejci-Studnicka line did with the advanced analytics, per Natural Stat Trick.

All were the best numbers of any Bruins line combination and it was one of those nights in which the eye test and the advanced stats supported an opinion.

There was certainly a chemistry among the trio Studnicka was pleased to see take place.

This is some serious sauce from David Krejci.

The Krejci to Jack Studnicka connection is something we’re gonna be seeing a lot of. pic.twitter.com/YUxqmoKEWk

“I thought our first two shifts were one of our two better ones of the game, so to get yourself into the game as a line, you feel good,” Studnicka said via Zoom after the game. “We were cycling the puck, a lot of o-zone. I thought us three read off each other really well. [Krejci] — you just have to be ready for the puck when you’re playing with him and get to the net.

“For our first game together, definitely happy and I think comfortability every shift just kept getting easier.”

It was Tuukka Rask’s first game in over four months and these are very weird circumstances. He still has three round-robin games to return to form.

With that being said, Rask was far from his usual self Thursday night. His first 20 minutes were full of unusual plays from the composed netminder. Early in the first period, he kicked away a shot right into the slot. Normally, he’d steer the puck into the corner, preventing any opposing player from a scoring chance. There was the shot from Markus Nutivaara that squeaked through. The only reason Columbus didn’t stuff home the loose change was because of a sprawled out Charlie McAvoy across the goal line.

Tuukka Rask is a bit shaky to start, but never fear: Charlie McAvoy is here.

“I think to me it felt like a scrimmage/practice in the beginning,” Rask said via Zoom after the loss. “Obviously there’s no atmosphere, but picking up pucks from the stands wasn’t an issue. It’s just tracking it every once in a while was a little unusual with the four-month break, but hopefully next game we’ll be feeling better.”

Rask clocked out for Jaroslav Halak in the middle of the second period, finishing with 17 saves on 20 shots. The only one of the three goals that can really be pinned on Rask was the second one — he’s got to be able to glove that Zach Werenski one-timer down from the point. But, once again, it’s his first game in four months. Nobody was expecting No. 40 to come in Thursday and play out of his mind.

The other two goals allowed can be attributed to defensive miscues, which we’ll get to in a bit.

Cassidy confirmed after the game that Rask will get the starting nod against the Flyers on Sunday. After that, it’s up in the air.

“From there, we’re going to use both,” Cassidy said. “I don’t want to get too far ahead of myself, but let’s see how Tuukka does Sunday, how he feels coming out of that game and we’ll make the decision of who goes against Tampa.”

Brad Marchand recently said these games might be “sloppy”. The Thursday night effort put forth by his team proved him right.

The Bruins had a whopping 21 total giveaways. In comparison, the Blue Jackets had eight.

Sean Kuraly’s neutral zone giveaway — and then failing to pick up Boone Jenner on the way to the net — led to Columbus’ first goal. Marchand had a huge giveaway that almost led to another Blue Jackets goal right in Boston’s slot.

On Gustav Nyquist’s goal, the Bruins were simply caught puck watching, leaving Rask out to dry.

“We didn’t play well in front of Tuukka in the first period,” Cassidy said. “We weren’t on time. They had more urgency.”

It’s probably the most cliche word in hockey, but it accurately describes the Blue Jackets game from start to finish: urgency. That extra jump Columbus carried for all 60 minutes didn’t bode well for the Bruins in their own zone.

“Pucks went through us in that first period a lot,” Cassidy said. “It showed us we weren’t really sharp with our sticks and our mental part of it.”

The defensive zone coverages just weren’t good enough for the Bruins in the loss. But, and this can be used for almost any fault in Boston’s play Thursday night, the team hasn’t played in four months and is using these games to just get back into live action, which is different from how Columbus approached the exhibition. Still, the Bruins must clean up their play in front of Rask.

Given that good play in the defensive zone is a large part of this team’s identity, you can bet it tightens up sooner rather than later.

Did Brad Marchand suffer an injury?

Late in the third period, NESN color analyst Andy Brickley noticed Marchand in pain as he skated off the ice after killing a penalty. The former Bruin speculated he thought he saw No. 63 head down the tunnel.

NESN immediately pulled the footage of what appeared to be when Marchand got hurt. You could see him wince after a quick pivot. Nothing has been close to confirmed yet, but judging off where he grabbed for after the play, it looked like a groin issue.

Brad Marchand in some pain. pic.twitter.com/vxPLEkOaDV

Marchand did leave the game.

“Don’t think it’s anything serious,” Cassidy said of the play. “We’ll have a better idea in the morning.”

These types of injuries — if it even is that — never seem serious. The issue is how much does this nag Marchand over the coming weeks? The four-month pause was supposed to eliminate any nagging issues these guys had. For Marchand to then generate one less than 60 minutes into his return would be very bad news for the Bruins.

If you remember, Marchand left the team’s scrimmage prior to the Stanley Cup Final last season after jamming his left hand. At the time, Cassidy called him “fine”.

Fast forward to a couple days after the Bruins loss in Game 7 and Marchand admitted he re-aggravated a hand sprain during the scrimmage. Ironically enough, one of the other injuries he dealt with throughout the 2019 postseason was one to his groin.

We don’t even really know for sure what Marchand hurt Thursday night. He could be totally fine. But one thing is for certain: those nagging injuries tend to be some of the worst.