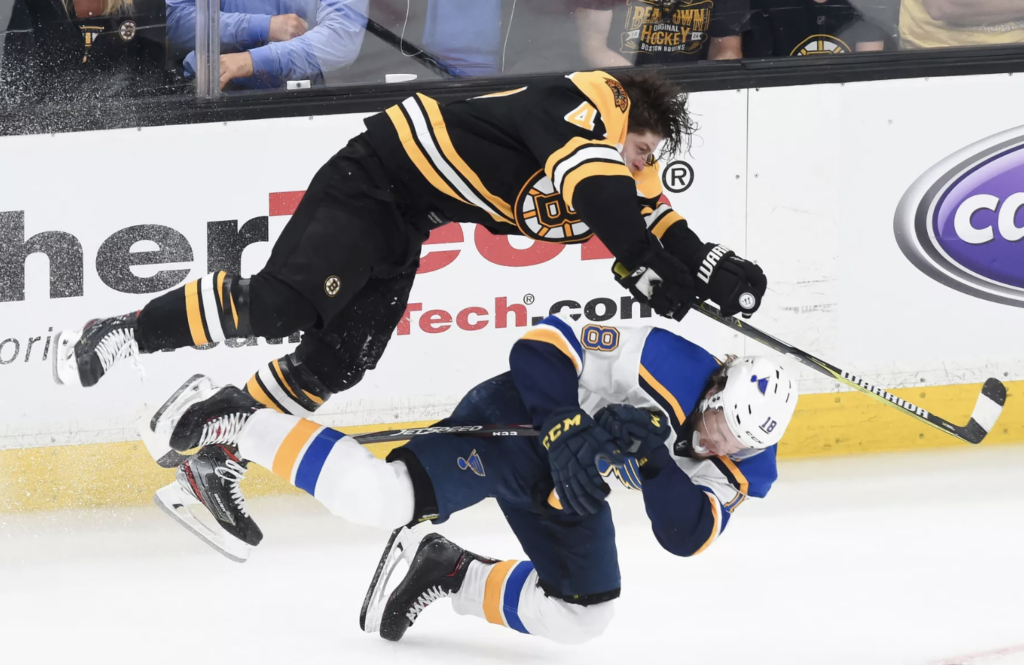 BOSTON — The Blues should’ve known better than to try and stir the pot with Torey Krug.

The Bruins had just taken a 3-2 lead on Sean Kuraly’s goal just over five minutes into the third period. The Blues were clearly becoming desperate, knowing they had just blown a 2-0 lead on the road against the favored Bruins.

What Game 1 proved – a 4-2 Bruins victory at a rocking TD Garden – was that the Blues aren’t good enough to keep pace with Brad Marchand, who like Krug, is only an easy target on the ice if you can catch him.

But with just over 10 minutes left in the game, Blues left wing David Perron tried sitting on and staying on top of Krug just mere feet in front of Tuukka Rask. Perron did a number, has Krug’s helmet eventually came off in the tussle.

Krug got to the ice, his hair flowing and his anger raging. He went looking for Perron but he had just come off on a line change. But as the Bruins were making a rush in the St. Louis end, Krug found his revenge target in St. Louis center Robert Thomas.

He delivered a crushing hit on Thomas and wasn’t called for charging. The crowd exploded as if the Bruins had just scored again.

“I had a lot of hits,” Krug said with a laugh when asked of the blow he delivered at 5-foot-9. “I was just battling with their guy in front and got up without a helmet and wasn’t too happy about it and came down the ice and had a chance to make a hockey hit and it turned out to be a good one. Hopefully, it gave the guys a boost on the bench. The crowd liked it. It’s just part of the game. I’m sure there’s going to be another one next game involving someone else.”

“I think our pace is really set by our defensemen,” Krug added. “It was sluggish in the first. In the second, we were able to get around to pucks, get it north very quickly and our forwards weren’t trying to do any east-west plays. They were just chipping it behind their D and going to work. When our pace is like that, it’s tough for a team to hang with us.”

That’s was exactly the case with the Blues Monday night in Game 1. Even when they were up, 2-0, after Vladamir Tarasenko’s goal a minute into the second period, it was apparent the Bruins were the better, deeper and more skilled bunch, from goalie to defensemen to finishers. The Bruins outshot the Blues, 18-3, in that second period, and were just waiting for the moment to bring down the hammer in the third.

“I think it’s important to have a calm, cool and collected approach to it,” Krug told me.
“We have that with our veteran guys and our younger guys have matured right in front of our eyes. We’re able to take whatever comes in front of us. Whatever the game needs, if it needs a big hit or a clean breakout play, or block a shot, our team is one to do that. It was obviously nice to get a couple of goals there in the second to get us going.”

If the Blues are trying to get into his head or any of the Bruins, it’s probably a strategy that will end this series in four or five games in favor of Boston.

“Every game in the NHL, since I’ve been in the league,” Krug said. “I’m a 5-foot-9 defenseman. I’d probably doing the same thing if I was on the opposing team. I’d probably try to run me right through the boards. It’s no secret that a strength of mine bringing up pucks and their strength is being on the forecheck, so they’re going to be coming. I know that. They’ve been coming all playoffs.”

“Well, he’s the type of guy that never gives up,” added Rask, who had a front row view of the Perron-Krug tussle that started it all in the third period. “I saw him battle in front of the net and I just wanted to tell him to get out of there during the rush, you know, but it’s – you’re playing in the Finals so there’s going to be battles all over the ice – and I think he had no helmet on so he wanted to make sure he made the highlights to make that hit. I mean, like I said, he’s a guy that never gives up and he battles hard.”

The Blues clearly felt slighted by the penalty calls that were heavily in Boston’s favor (5-2) in Game 1. But the Blues, if they are going to stand any chance of making this a series, can’t spend time wishing away legitimate calls (for the most part) and hoping for some of their own.

They also shouldn’t waste time trying to bully their Bruins. Boston is far, far too good to be either intimated or bothered by it. That’s the thing about these Bruins and what makes their run so special. They do have the grit and determination of the old school Bruins but they also have the brains and skills of the new age Boston hockey club.

Torey Krug has been the symbol of that ever since he landed in Boston. And on Monday night in Game 1, that continued. The Blues are in big trouble and the Bruins seem only too happy to take advantage.