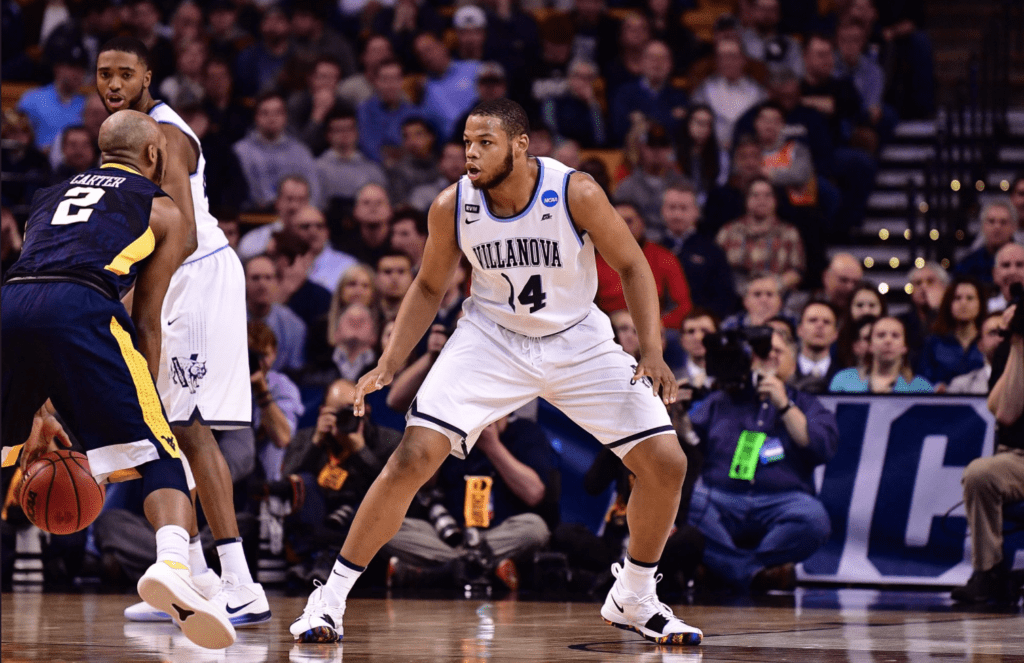 BOSTON — Villanova is advancing to the Elite 8 and it was redshirt freshman Omari Spellman who showed the way.

Junior Jalen Brunson had a game-high 27 points for the Wildcats but it was Spellman who took over the game when the top seed in the East trailed by six with under 12 minutes left. His block and put-back slam highlighted an 11-0 run and gave Villanova the surge it needed in a 90-78 win over No. 5 West Virginia Friday night at TD Garden.

Spellman finished with 18 points (4-of-8 from 3-point range) and eight rebounds for the 33-4 Wildcats, who will battle No. 3 East seed Texas Tech, a 78-65 winner over No. 2 Purdue in Friday’s nightcap. The winner of Sunday’s game (2:20 p.m.) at TD Garden will earn a place in the Final Four against either Duke or Kansas next weekend in San Antonio.

“After the game, (TBS reporter) Allie LaForce asked me, “How do you think Omari played?” And I just said, we’re used to that. Omari can shoot,” Brunson said. “He can make plays. He can do all of that. He’s a great defender. It’s nothing that we’re not already used to. I mean, we expect that of him. He’s supposed to play at a high level every game.

“So for him to play like that, it’s great for him, how consistently he’s been doing it. When he makes shots, it’s not special to us. We’re thankful for it, though. Very thankful.”

“Coach always tells me to catch and shoot,” Spellman said. “We were just looking to come out and run offensive score. I was just having a shoot ’em up, battle in the streets mentality. I was just trying to take the right shots and be aggressive.”

“What a game, man. What a college basketball game,” Villanova coach Jay Wright said. “I hope that looked as good as it did from the bench, man. Just all the credit in the world to West Virginia. That was the most physical, physically demanding, mentally demanding 40 minutes we’ve played in a long time.”

Villanova will look to repeat their 2009 to the Final Four when they also won at the Garden in the epic over Pittsburgh.

These Cats are CLUTCH! ?

Nova extends the lead to 10 with 2:12 to go!#MarchMadness #Sweet16 pic.twitter.com/6WgCyJPQpF

Villanova hit its first six shots, including a pair of threes, to take a 14-8 lead.

West Virginia assumed momentum with its relentless pressure, forcing five Villanova turnovers in the first 12 minutes. On one mid-court exchange, Collin Gillespie dove for a ball, threw it back in bounds toward Brunson at the March Madness logo, leading to a turnover and a West Virginia basket.

“They’re so relentless,” Wright said. “They keep coming at you. And because of that, because of how good West Virginia is, how well coached they are on the half-court offense; they don’t get credit for that. Their defense is great, but their half-court offense and offensive rebounding is strategic. They’ve always got three guys, four blocks in the middle of the lane. It’s really intelligent basketball.

“Because of that, I’m so proud of our guys’ leadership. Jalen Brunson, Mikal Bridges, and Phil Booth, our three leaders. When we got down six, I saw they pulled everybody together and just kept us together to grind it out. Great win for us because West Virginia’s so good.”

Jevon Carter’s offensive threat drew defender’s, allowing him to dish in the paint. He accounted for all five of West Virginia’s first half assists.

West Virginia took its first lead, 25-24, on a Jevon Carter three with eight minutes left in the first half. The Mountaineers, who were led by Daxter Miles’ 11 in the first half, took their biggest lead of the first 20 minutes, 33-30, on a Lamont West putback with 5:08 left.

Villanova, led by Brunson’s 16 points in the opening half, responded with a 14-9 run to end the half and take a 44-42 lead to the locker room.

Then Villanova woke up. After scoring six points to tie it, Mikal Bridges drained a three with 9:36 left to give the Wildcats the lead, 63-60. Then Spellman exploded onto the scene again. He blocked a shot on one end and then finished on the other end with a thunderous putback slam, capping an 11-0 Villanova run and sparked a Bob Huggins timeout with 8:59 left.

“We came into the Tournament shooting almost 77 percent from the free-throw line. We didn’t make free throws. Those things come back and bite you. You’ve got to continue to do fundamental things, and when you have open shots this time of year, and the further you go in the Tournament, there’s less and less open shots. So when you get one, you have to make it. They did. We didn’t.”

Huggins was beside himself as officials called eight of the first nine fouls of the second half on West Virginia.

“Sure, absolutely did (change his team’s approach),” Huggins said. “I’m trying to say the right things. Yeah, it does. When the whistle keeps blowing, it really takes away your aggression, you know. And then J.C. had three, Dax had four. They’re the heart and soul of this team. They’re the guys that everybody looks to. They’re the guys that who make things happen.”

James Bolden hit a three but it was Spellman who answered again with a triple to put Villanova ahead 81-71 with 2:29 left.

In the second game, Purdue jumped out to a 15-8 lead but went cold for the rest of the first half. The Red Raiders assumed a 30-25 halftime lead.

The slow tempo continued for a good portion of the second half, with Texas Tech going up by as many as nine, 52-43. Purdue closed to within three, 54-51 and 56-53, but could get no closer.