On the Big Screen: Celtics Need One Minor Fix to Beat Bucks

The Bucks have set screens that allow Giannis Antetokounmpo to pick his matchups, while the Celtics struggle to do the same for Jayson Tatum. 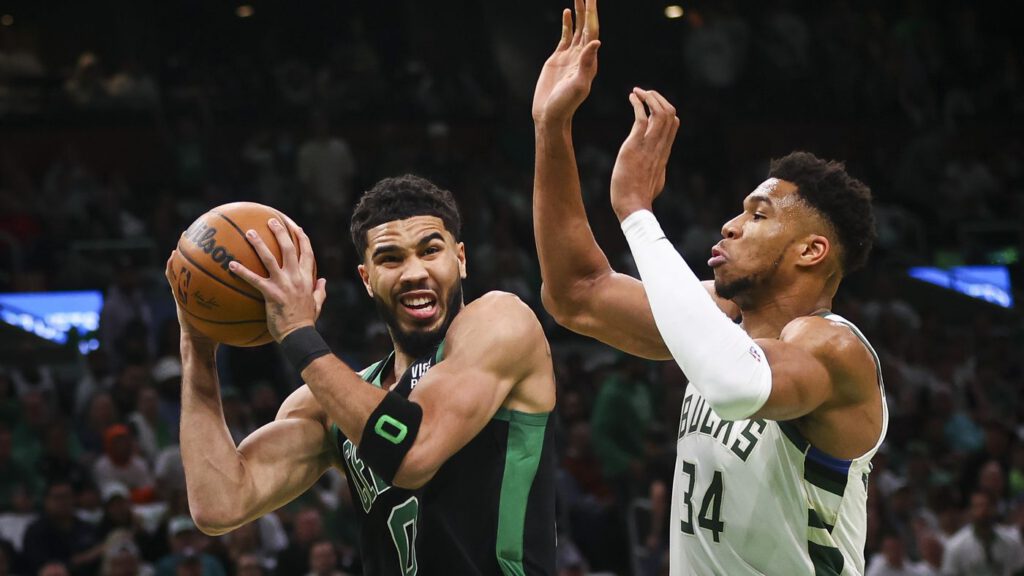 MILWAUKEE — Giannis Antetokounmpo and Jayson Tatum’s series hit an inflection point during Game 3, a swing moment in the Bucks and Celtics’ hopes of eventually advancing to the NBA Finals. Antetokounmpo broke out for 42 points and picked his matchups, while Tatum struggled to shake Wes Matthews. The complaints about calls fueled by an emotional one-possession outcome boiled down to something simpler at practice the next day.

Milwaukee is on the verge of taking control of the series because they’ve set better screens for Antetokounmpo than Boston has for Tatum.

“First, your goal is to crack the guy,” George Hill told reporters explaining how the Bucks have screened for Giannis. “Secondly, is just make him take a different path to get connected back to Giannis’ body. If I can make him go under me or over me, I feel like we won that possession.”

Officiating overshadowed a furious 13-point fourth quarter Celtics comeback led by Jaylen Brown and Al Horford, which fell short in a 103-101 loss to the Bucks in Game 3. Boston took a brief lead with 1:49 remaining on four straight Brown free throws. Then, Antetokounmpo scored at the basket before Jrue Holiday bumped Jayson Tatum to free himself in the lane for a floater. Hill noticed Antetokounmpo letting the game come to him more, playing off-ball some, while Mike Budenholzer saw the star playing out of the post, elbow, screener and ball-handler positions.

The Bucks’ head coach saw that effort almost dissolve in one motion, Holiday getting into Marcus Smart’s body on a switch with Hill with four seconds remaining and Milwaukee ahead by three points. The officials called a sweeping foul that limited Smart to two free throws in the bonus over three, Budenholzer later noting that the Bucks never wanted to foul. While Ime Udoka fumed over a bad no-call, in his opinion, Budenholzer keyed in on Boston’s 34 free throws. Both sides bristled over the whistle, the NBA’s officials holding up their call on Holiday and amending others in its two-minute report.

Smart put his hands on his head, stretched them outward in protest and Celtics on the floor pleaded for a replay that wasn’t possible. Udoka had already used his challenge on Grant Williams’ fifth foul earlier in the quarter. The ball’s now in Udoka’s court to save Boston’s season on Monday night. As Giannis ramps up his physicality, embracing more contact and setting up more difficult calls, where he challenges becomes more important. He missed an opportunity to save Williams a foul earlier and hand Giannis his fourth on a blocking call.

“You’d like to save (the challenge) more towards the end,” Udoka told CLNS Media. “But their explanation is if they don’t fall down, they don’t call it. So I’ll teach my guys to flop more.”

Udoka quickly turned his attention toward the Celtics’ 17-point third quarter, their inability to free up Tatum as he scored 10 points on 19 shots, and their defense of Antetokounmpo, who added 12 rebounds and assists through his 16-for-30 scoring explosion. Boston had held Antetokounmpo to 38% shooting through the first two games.

Antetokounmpo got to play out in space more in Game 3, Milwaukee ran smaller lineups with Brook Lopez in foul trouble and set Antetokounmpo up against mismatches. Giannis shot 5-for-7 against Williams after starting the series 8-for-18 against him, switched regularly onto Brown and found opportunities on the fast break to line up Smart and Derrick White. Giannis has now hit all seven shots Brown guarded in the series, 4-of-6 against Tatum and 3-of-8 against the two guards.

“It’s a mix,” Udoka told CLNS at practice on Sunday. “Everybody’s guarding him. They’re targeting specific matchups, and our defense is based on our individual defenders. That’s the foundation of it. Understanding the way he wants to score, we gambled at times and gave him driving lanes, we could be better as far as that, but keeping him off balance, giving him different matchups has worked well. The main thing, honestly, is making him score in the half court. Third quarter yesterday, had 24 for the game, and 18 fast break points were in that third quarter and a big part was him due to our turnovers. I think 12 turnovers in the game, and seven were in that third quarter. We kind of aided them, as we did in Game 1, with all the turnovers. We keep them in the half court, and we feel good about our team defense and individual defense on him, but kind of opened the floodgates in that third quarter, got him going and he becomes more aggressive in the half court.”

Giannis vowed after Game 2 to find solutions and keep attacking, and he’s forced the referees to make difficult calls through a barrage of contact and players on both sides smashing into the floor. Boston struggled to absorb contact from Antetokounmpo racing downhill without fouling.

The Celtics benefited initially from keeping Antetokounmpo in isolation and locking up Grayson Allen, Wes Matthews, Pat Connaughton, Bobby Portis and Holiday on the perimeter. Milwaukee hit only 3-of-18 from three in the first half, and Boston stayed within single-digits even as their own offense stalled at 33.3%. That offensive stagnancy fed the Bucks in turn, though. Tatum played in a crowd late in the shot clock, backing away from Lopez’ double team too late to find Williams on the weak side.

Williams drove and, of course, hit the floor. Players fell at least 50 times in an increasingly grueling series. Sometimes chasing loose balls, other times driving in the lane, colliding with screens, or, in Williams’ case, crashing into Lopez. Williams got up and complained as Connaughton drilled a three the other way. Udoka called timeout and exploded on him, Boston again losing some composure as it navigates a team that plays aggressively.

In that game alone, Williams pulled down Antetokounmpo, who in turn dragged down Williams with him on the fast break in a play deemed a common foul upon further review. Matthews slid under White chasing a loose ball along the sideline. Portis, rising over Robert Williams III chasing a rebound, elbowed Boston’s center in the head and sent him to the locker room, Williams III returning minutes later. Tatum and the Celtics have a size advantage they’ve struggled to exploit when Lopez runs into foul trouble, Milwaukee keeping its bigs glued to the paint while Holiday and Matthews navigate poor screens and shut out Tatum.

“They’re physical on the perimeter,” Udoka said. “I don’t feel like we set up and used the screens properly last game, and set screens, like we did in Game 2. That was a big point of emphasis after Game 1, was us releasing some of that pressure by setting screens, and we did it and got wide open looks in Game 2. Not as clean in Game 3, but also we still had looks and just overthought it at times and didn’t take the shot that was there in front of them. We know (Tatum) and JB are elite mid-range shooters, and come off clean and get those looks, they should take them every time. At times, because of the way they’re loading up in the paint, I think they’re passing up some shots and then dribbling too deep into the defense, and so that seemed to be the case with him last game.”

The Celtics had almost fallen out of Game 3 into the fourth quarter when Horford decided to pick up the pace. In a one minute span midway through the quarter, he pulled up and splashed from mid-range on a Tatum misdirection, hit from the left wing behind the arc and converted an open hook shot as the Bucks switched out Holiday.

Horford took the available shots assertively, and Boston stormed back within two points after trailing by eight. The Celtics only trailed by two points entering the second quarter after a grueling first, and remained in striking distance after their worst quarter all series in the third. They’re never far behind, but feel rushed.

The Bucks only shot 26.5% from three in the win and without Khris Middleton have struggled to create offense outside of going to Giannis for two points at a time, along with some Lopez dump-offs. Boston has the opportunity tonight to let Tatum bounce around some screens, work him away from the ball more and get him out in transition.

The Celtics’ misses have strung into Bucks run-outs, with ball movement and spacing allowing Boston to blow out Milwaukee in Game 2. The only way Tatum and company can effectively defend Giannis is to score efficiently, and that starts with simply freeing their star the way Milwaukee did theirs with Williams III, Williams, Horford and even Brown, Smart and Tatum breaking off into two-man games of their own.

“It’s not just the pick-and-rolls,” Budenholzer said. “It’s some off-ball stuff, different situations, there’s a physicality that it takes, and a screening mindset that we need from everybody, including our guards.”