One of the Biggest Storylines of Bruins Training Camp 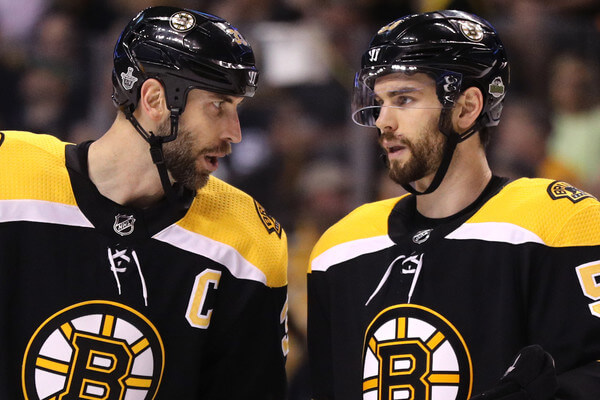 It’s no secret the Boston Bruins have had a really boring offseason. The most exciting thing to happen to the hockey club was coming up short with the hottest free agent on the market in John Tavares. In terms of storylines, there are a few that jump off of the page. Of course there is how the first two lines will play out, who will center the third line and pressure on Tuukka Rask.

But there is one that has the chance to be very intriguing and it’s who the two odd-men-out are on defense.

Right now there are eight NHL-ready D-men signed with the team. There were rumors that Torey Krug might be dealt, but that seems highly unlikely with the season right on the doorstep.

The guys who are guaranteed to be in the lineup every night are Zdeno Chara, Charlie McAvoy and Krug. The rest is totally up in the air.

On the right side, head coach Bruce Cassidy had no problem slotting Adam McQuaid in as a healthy scratch last season. It’s safe to assume he’ll do the same again this year and go with Kevan Miller, Brandon Carlo and McAvoy.

🎥 INTERVIEW 🎥 #NHLBruins Adam McQuaid talks about competing for his job and the new challenges within the Atlantic Division pic.twitter.com/o7lWuifqOS

“It’ll be interesting to see what happens,” said a not-so-optimistic McQuaid about the situation on defense. “There’s a lot of depth and a lot of pushing. That’s what you want to have. You’re always competing, you’re always working to earn a position and it’s no different this year.”

While it’s a bit more of the same on the right side, the left side still remains a big question mark.

Last year, the Bruins had Chara, Krug and Matt Grzelcyk on the left side. Over the offseason, team president Cam Neely expressed his interest in getting bigger on that side and rightfully so. Even though Chara is the tallest player in NHL history, Krug and Grzelcyk measure in at a small 5’9″.

In response, the Bruins went out and signed John Moore to a five-year deal with an AAV of $2.75 million. Moore measures in at 6’3″.

From the standpoint of needing to get bigger, the signing made sense. But, it would have made even more sense had the Bruins traded away one of Grzelcyk or Krug.

It’s hard to imagine how Cassidy will handle this. Chara is the best shutdown defenseman of the group, Krug lands the biggest offensive impact and Moore was just signed to a five-year deal. This administration has botched too many long-term deals to mishandle another.

🎥 INTERVIEW 🎥 #NHLBruins Matt Grzelcyk talks about competing for his job and how tough the Atlantic Division will be this season pic.twitter.com/3VoElxIGzu

Moore seemed to feel as if his contract didn’t guarantee a position in the top-six at last week’s first day of captain’s practice.

“It feels great, but at the end of the day, security doesn’t exist in this league,” said Moore. “You’ve got to prove it every day. It feels good to be wanted, but I’m hungrier than ever to go out and prove it now.

“I’m aware of the numbers here and there are some really good defensemen on both sides. The dialogue all along was ‘come in, work hard and it’s a competition.’ You’ve got to come in and earn it.”

Even with Moore’s comments, it’s hard to believe that GM Don Sweeney and company would ink him to a five-year deal and not have him in the lineup every night. If that’s to be the case, Grzelcyk would find himself on the outside.

“I try not to think about it,” said Grzelcyk of the new competition on the back-end. “It’s out of my control. I just try to show up and give my best effort I can each and every day. We’ll see how it turns out.”

Another option Cassidy could employ is to play Moore against bigger teams and sit Grzelcyk. Then against teams where offense will be a bigger factor, play Grzelcyk and sit Moore.

No matter what happens, it definitely won’t be an easy decision for Cassidy.