One PR Suggestion for the Red Sox–Bring Back Brock Holt 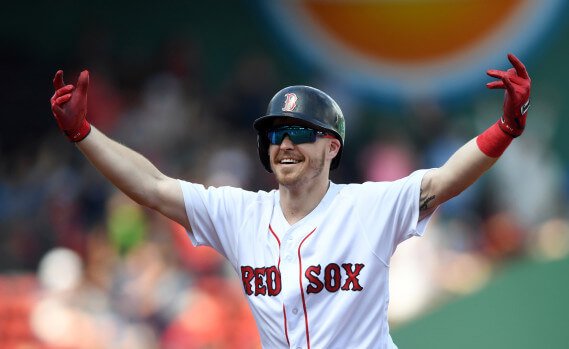 It certainly wouldn’t completely heal the wound left by the expected departure of Mookie Betts, but if Red Sox ownership wants to win back some of the fan base who’s ready to storm the gates of Fenway, re-signing Brock Holt is one way to do it.

The reaction that we saw on Tuesday night when the news broke that this rumored blockbuster deal was coming to fruition was almost exactly as anticipated. We had some who were okay with the transaction. Sure, it’s tough to watch one of, if not the best homegrown talent to come out of your farm system in the last 50 or so years be sent packing when you could have held onto him for at least another season, but you could rationalize why this was a deal worth making. And on the other end of the spectrum, we also had those who were, and still are, calling for the metaphorical heads of John Henry, Tom Werner, and Sam Kennedy.

It’s safe to say that the poor intern running the Red Sox Twitter account has taken an unnecessary beating like they were the ones who actually facilitated the mega-deal.

Regardless, the Red Sox do find themselves in a lucky, opportunistic spot as the dust continues to settle. A key member of their ballclub who’s been apart of the organization since the 2013 season still sits on the market, waiting to sign with a potential new team. I’ll give you a hint; his son Griff has become a social media star within the walls of Red Sox Twitter. Brock Holt’s return would ease the anger, at least momentarily.

There was rumored interest earlier in the offseason from division rival, the Toronto Blue Jays, according to Chris Cotillo of MassLive. And there were even some whispers about the Cincinnati Reds being in on the utility man. But nonetheless, Holt still sits on the market while the Red Sox once seemingly astronomical payroll is sliced drastically.

Holt’s value is obviously insurmountable and he wouldn’t come at an expensive cost. His ability to play seven of the nine positions in the field has been so undervalued by many simply because people just got used to it. I wouldn’t be shocked if he secretly had a 97 mph fastball in his arsenal with a devastating slider, to be honest.

But somebody like him is key to a championship-driven team looking to sustain a healthy roster with his consistent ability to allow teammates to take days off without being a true detriment in the field or at the dish.

Fangraphs has his projected contract set at 2-years, $15 million bringing him to $7.5 million per. With the Red Sox payroll now sitting pretty at approximately $189 million, taking on potentially $7.5 million wouldn’t be anything too absurd. Although, they do need to remain flexible enough so if they do decide to make an impactful move at the deadline–which would be the most shocking thing since I learned Christian Bale is English–they have the space that would allow them to remain below that $208 million magic number through the entirety of the 2020 season.

More importantly though–putting his actual skill and monetary value aside for a moment–Holt is a fan favorite that would bring some sort of jolt of energy to a spring training that many are struggling to find reasons to be excited over.

You’re currently looking at a team that is involved in a cheating scandal that has the potential to place a dark, tainted cloud over your most recent World Series Championship. A team that doesn’t have a manger as a result of his involvement in a separate cheating scandal and to top it all off, you just dealt the face of your franchise for a player previously involved in an assault incident and one that may or may not actually be healthy.

When the Red Sox were hamstrung with the $27 million owed to Mookie Betts and $32 million owed to David Price, coupled with the signing of second baseman Jose Peraza, it appeared as though the hope that Boston could sign Brock Holt back was fading. But with the most recent move that not only rocked Boston, but all of baseball, the opportunity to re-sign Holt has re-opened its doors.

Thrown together with all of this? He’s been a glue guy for this team that a majority, if not all of his former teammates would love to see back in that clubhouse. His return has the potential to alleviate some possible bitter tastes left with two well-liked teammates being sent out the door in the name of payroll.

Prior to the 2019 season, Holt told Chris Mason, now of MassLive, that he wants to finish off his career in Boston, however long that may be.  In knowing that, maybe he even takes less to remain in the city he’s called home for seven seasons.

If the Red Sox want to again, at least show some sort of attempt at winning back a good chunk a fan base that is seething at the thought of Mookie Betts in a Dodgers uniform, re-signing Brock Holt–the only man to ever hit for the cycle in a postseason game–is a clear and obvious move that should be made. Truthfully, I’m shocked it hasn’t already been announced.