Patrice Bergeron, Brad Marchand & David Krejci Stepped Up When Bruins Needed Them Most 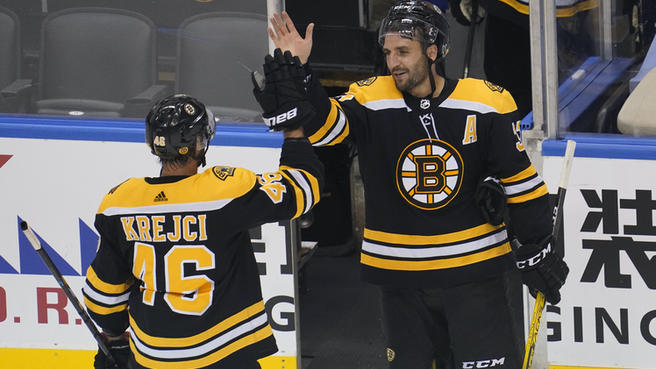 On the morning of Aug. 15, the Bruins chances at a deep Stanley Cup run looked bleak at best.

Tuukka Rask, the team’s Vezina-caliber starting goaltender, announced a few hours before Game 3 that he was opting out of the NHL’s postseason to return home to his family. That was massive. Also at that time, David Pastrnak, the team’s leading goal-scorer, would be ruled out for a second consecutive game with some sort of nagging injury. Because of COVID-19 restrictions on what teams can disclose with regard to injuries, no one knew how serious it was. That was massive as well.

Add on the fact the Bruins were only two games removed from that wretched round robin (three goals in four games) and Boston appeared to be in real trouble.

That was until the Bruins rattled off three straight wins, beat the Hurricanes in five games and played some of their most resilient hockey of the season.

“We found ways to win, so I’m proud of the guys,” Bruce Cassidy said after Wednesday’s series-clinching 2-1 win in Game 5. “We went through a little bit of adversity, every team’s going through it here, we did it with some of our personnel. But you sort of keep the trains running on time, so to speak, and do your job.”

Despite all the adversity and lineup maneuvers throughout the series, there was one constant that drove the Bruins to “keep the trains running on time”.

“They know what’s at stake,” Cassidy said of the veteran core. “I mean I think they’ve been around long enough to know that when you get a chance to close out a team you have to take advantage of it.”

That veteran core was massive in getting the Bruins a win in Game 5. After all, Patrice Bergeron and David Krejci were the lone goal-scorers and key cogs in the Bruins offensive production throughout the series.

But none of that was guaranteed. Heading into this first-round matchup, the Hurricanes were most people’s pick and for good reason. The Bruins were fresh off a winless round robin that saw the Bergeron line earn a grand total of one point and every member of the Krejci line amass one point apiece.

Things were bad. They were struggling.

So, how’d they end up producing?

Let’s start with Krejci — the team’s leading point-getter through the series.

Krejci looked to be heading towards another postseason with a revolving door on his right and an inconsistent Jake DeBrusk on his left. In Games 1 and 2, DeBrusk couldn’t buy a goal if he was given all the money in the world. He couldn’t finish chances.

Even through DeBrusk’s struggles, Krejci managed to pot an important goal in Game 1 and a goal and an assist in Game 2. In Game 3, he added two apples in the win.

It was Game 4 in which Krejci, DeBrusk and Ondrej Kase began to see results as a complete unit. DeBrusk tossed the monkey off his back and put up two goals, Kase earned two assists and Krejci added in another assist. The series-clinching win in Game 5 saw Krejci earn another goal and another assist.

“We all love playoff Krech,” Pastrnak said after the Game 5 win. “He’s unbelievable. So much experience and his hockey patience is incredible.”

Krejci’s taken his fair share of criticism over the last five or so years in Boston. His regular season production is always solid, but it’s never to the level of the Marchand-Bergeron-Pastrnak line above him. He also doesn’t carry the flash of that trio.

That criticism will fade into season’s past with his recent 8-point performance in the series with the Hurricanes.

And then there was Marchand and Bergeron.

Their situation didn’t look amazing either heading into this series with the Hurricanes. They were to be matched up with the Sebastian Aho line — a trio that dominated the Rangers. After a lackluster round robin performance, the Bergeron line appeared to be next in the crosshairs of Aho, Teuvo Teravainen and Andrei Svechnikov.

Yet even without Pastrnak for three of the five games, Boston’s iconic duo found a way to put up points.

Marchand put up seven points (3 goals, 4 assists) in the five games. Bergeron put up five points, including the 2OT-winner in Game 1 and the winner in Game 5 when he caught Petr Mrazek with his head in the clouds and ricocheted the puck off his foot and in.

“He was standing up,” Bergeron said of Mrazek on his Game 5 goal. “So, I was just trying to catch him – throw it at his feet and see what happens. I knew that there wasn’t that much time left in the period. So, I said, why not try it, just because it was kind of a desperate play with a couple seconds left.”

Some insane awareness from Patrice Bergeron to make it 2-1 Bruins pic.twitter.com/XB2xITe7tn

Production from your best guys is always a luxury in the postseason. When the Bruins big guns were quiet last postseason, the rest of the lineup stepped up. With the four-month pause and guys still finding their game and the lineup shuffled around like a deck of cards, that doesn’t look to be a guarantee this year.

But the Bruins veteran core stepped up in the face of their starting goalie opting out and their favorite goal-scorer being injured, and now Boston awaits a second-round matchup.

David Krejci, Brad Marchand and Patrice Bergeron are the Bruins’ top scorers after round one.