Patriots look to clean up a few things as first full week of training camp winds down. 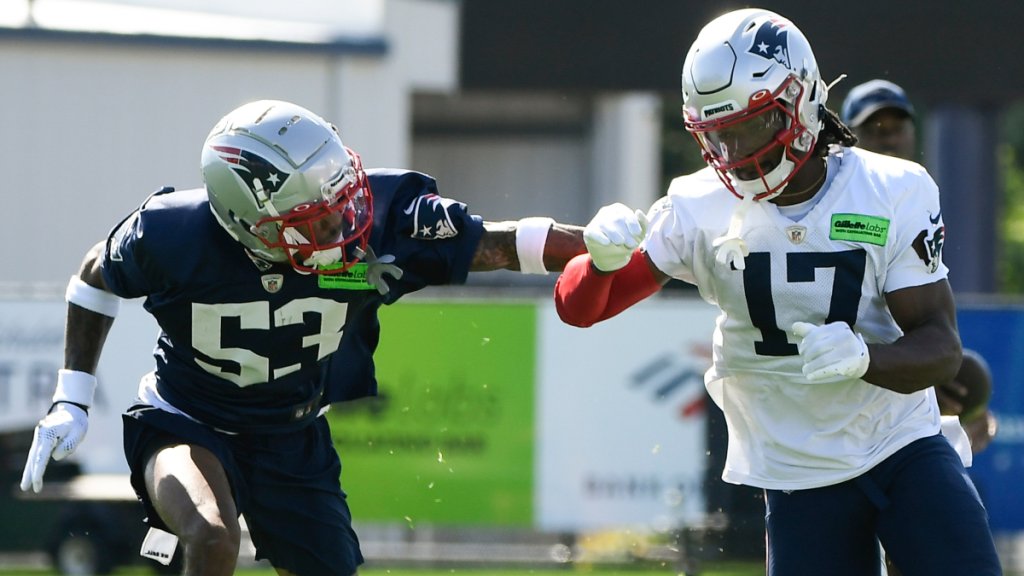 FOXBORO — The Patriots dialed it back a bit on Wednesday after two days or padded practice. The team  practiced in shells at a medium pace, barely above a walk through. The session was designed to clean up some stuff from earlier in camp. Clean up what exactly?

Even in shells the Patriots offense did not look crisp during what few competitive reps they had near the end of practice. Mac Jones was sacked twice and could have been sacked a third but got the pass off. Two running plays yielded next to nothing as well.

Play of the Day

Kristian Wilkerson reeled in a deep deep ball from Bailey Zappe with Shaun Wade in coverage.

Rhamondre Stevenson did not practice, He appeared to tweak something on Tuesday and had to sit out a couple drills but ended up finishing the day. Hopefully just precautionary.

Quarterback Brian Hoyer returned to practice. He mainly hung out on the lower practice field but it was nice to see him after an extended and unexplained absence from Camp.

Linebacker Mack Wilson continues to impress. He had a sack during the red zone period of practice and generally has been making a couple big plays each day of camp.

We keep saying this day after day but it’s very apparent Montgomery will not only make the team but be used in a variety of ways. Montgomery worked out exclusively with the running backs today in individual and team drills. He is the obvious candidate to eat up passing down back snaps if James White is slow to return.

Rookie running back Pierre Strong got some more run today but is clearly still not 100% working his way back from injury. He labored through individual drills, looking a bit slow afoot and winded.

Quarterback Mac Jones looked sharp in the early portion of 7 on 7s and 11 vs 11s. He hit 13 consecutive passes at one point. He did throw a grisly interception, floating a ball up intended for DeVante Parker that was easily intercepted by Terrence Mitchell. Looked like a miscommunication.

Patriots Defensive tackle Christian Barmore has easily been the most noticeable player at camp through 7 days. He has been dominant during one-on-ones and an absolute problem during competitive drills repeatedly blowing up plays at the line of scrimmage.

Barmore – who was solid as a rookie last season – credits improved conditioning for his improved play.

“I was training in Texas in the heat. A lot of cardio more than anything, and a lot of footwork drills,” Barmore told reporters after practice. “I rode the bike, ran the hill, and did a lot of curve drills like running [through] the bags. Did a lot of suicides. That’s my style.”

Patriots head coach Bill Belichick said that improved conditioning is something you frequently see from secon year players after having a chance to have a full offseason under team supervision and guidance.

“Being in condition and having a good offseason program, much better than what most rookies have coming in after the draft,” Belichick said. “Knowing our defense, his teammates and how to communicate with them, and what the offense does.”

As expected Bill Belichick didn’t have a ton to say about the tampering scandal involving the Miami Dolphins and Tom Brady.

“I’m not really worried about that,” Belichick said. “I’m just trying to get training camp in.”

On Tuesday the league revealed that Brady had “numerous and detailed” conversations that began as early as August 2019 about Brady potentially joining the Dolphins in a minority ownership role. Brady was at the time under contract with New England. The Dolphins made similar overtures to Brady while he was a member of the Tampa Bay Buccaneers.