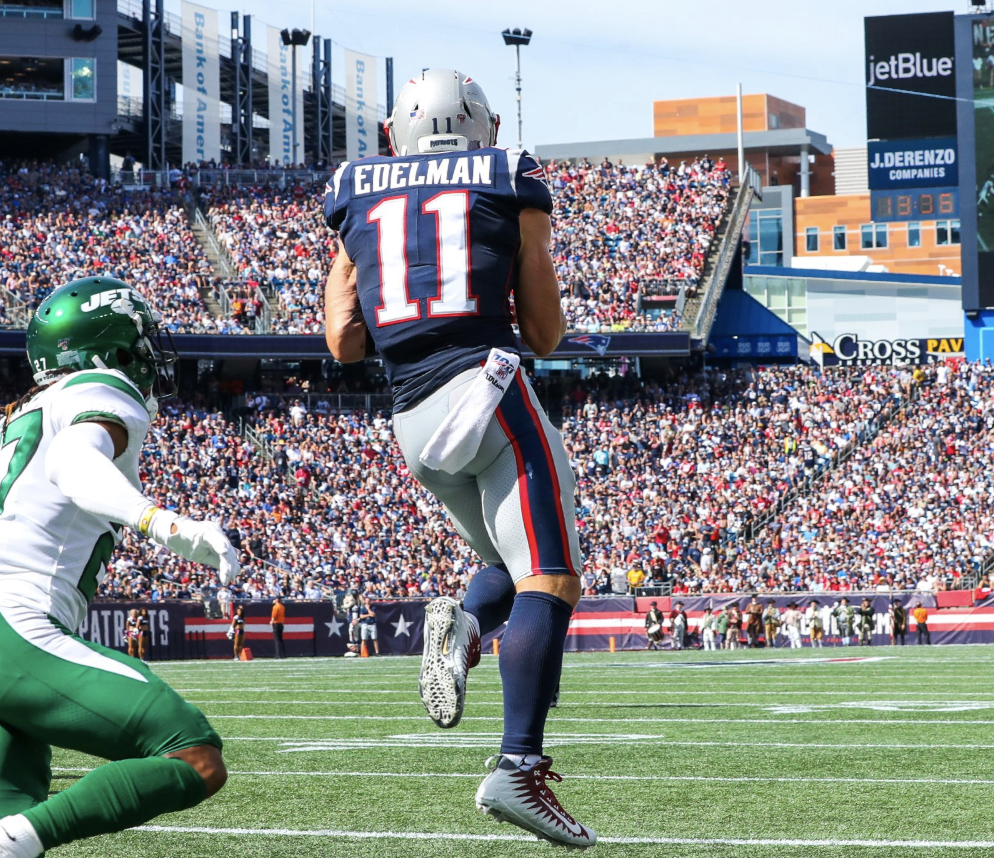 FOXBORO — The Patriots were three-touchdown favorites Sunday, and they played like it from the start. The Patriots blew the Jets off the field in the first 20 minutes of the game and cruised to an easy 30-14 win before a sunbaked crowd at Gillette Stadium.

In winning his 28th career start against the Jets, Tom Brady was 28 of 42 for 306 yards and connected with Phillip Dorsett and Julian Edelman on touchdown passes, eclipsing the injured Drew Brees for second on the all-time list with 524 career touchdowns. For a full boxscore from Sunday’s game, click here. Rookie Jarrett Stidham made his NFL debut with 8:41 left in the fourth quarter. Brady returned to the game after Stidham threw a pick-6 to Jamal Adams midway through the fourth.

The Patriots defense held the Jets to 105 yards and no points, with the only scores coming on the recovery of a Gunner Olszewski muffed punt in the end zone and the Adams interception. The Jets were 0-for-11 on third down and didn’t pass the 100-yard mark until their final possession. The 105 yards allowed were the fewest in the Bill Belichick era and the fewest since a franchise low 65 allowed to Seattle on Dec. 4, 1988.

With Sam Darnold out with mono and Trevor Siemian sidelined with injury, second-year quarterback Luke Falk was thrown to the wolves and couldn’t manage much of a threat, getting sacked five times on the day.

The most significant play of the game came on New England’s first drive when Josh McDaniels dialed up a play-action on third-and-1 at the Patriots 42. With the defense sucked in to stop Sony Michel, Ryan Izzo floated wide open down the left side for a 41-yard gain. Four plays later, Michel danced into the end zone off the right side for the first Patriots score of the day.

There was a bit of a buzzkill when Stephen Gostkowski sliced the extra point wide right and boos were heard all over Gillette.

That was the only negative to an otherwise expected domination of the Jets in the first quarter.

While Falk did convert a nice pass of 15 yards to Jamison Crowder on second down on New York’s first drive, it was another dominant effort by the Patriots defense against an overmatched and overwhelmed opponent.

Jamie Collins and Michael Bennett had sacks of Luke Falk on back-to-back drives.

When Brady found a wide open Phillip Dorsett for 25 yards on another play-action corner route, he passed Drew Brees for second place on the all-time list with 523 touchdown passes.

On his 5-yard TD connected with Julian Edelman, Brady took a hit to the ground but got up immediately and jumped into the arms of left tackle Marshall Newhouse as the Patriots grew their lead to 20-0 early in the second quarter.

The Jets did shut down the Patriots on New England’s final two possessions but still the Patriots out-gained the Jets, 217-66, in the opening half. In the first three games, the Patriots defense has not allowed a single point in the first half while holding the opponent to 87, 51 and 66 yards, respectively. Late in the first half, Julian Edelman landed hard on his left side and left with a chest injury and did not return.

Ty Law was honored at halftime for his recent induction into Pro Football’s Hall of Fame. He said he’s “not Joe Namath” but predicted the Patriots would be raising a seventh Super Bowl banner next season, which would be the most in NFL history.

The Patriots again stalled to open the third quarter but Devin McCourty picked up the offense when he picked off a floating duck from Falk at the Jets 40 and returned it 23 yards to the 17. But the Patriots injury news got worse when Josh Gordon got his right hand caught in the facemask on a block of Nate Hairston on an edge run by Phillip Dorsett. Gordon was called for the penalty and then was doubled over in pain as he was tended to by training staff. Gordon returned with his pinky and ring finger taped together.

The Patriots had to settle for a 37-yard Gostkowski field goal and a 23-0 lead.

Brady and the Pats appeared headed for another frustrating drive when Brady was called for intentional grounding, setting up a 3rd-and-22 at the Patriots 32. Gordon showed his fingers and hand were just fine, going airborne and toe-tapping the left sideline for a 28-yard completion.

Two plays later, Rex Burkhead took a pitch from Brady and went in from two yards for a 30-0 Patriots lead.

The Patriots lost the shutout when Gunner Olszewski muffed a punt at the Patriots 6 and Arthur Maulet recovered in the end zone for a Jets touchdown with 21 seconds left in the third quarter. It marked the first touchdown scored against the Patriots in 2019. The second Jets touchdown came when Jarrett Stidham overthrew Brandon Bolden on a short route and Jamal Adams raced 60 yards untouched for a pick-6.

The Patriots play their third consecutive AFC East opponent next Sunday when they travel to Western New York and take on the Buffalo Bills.