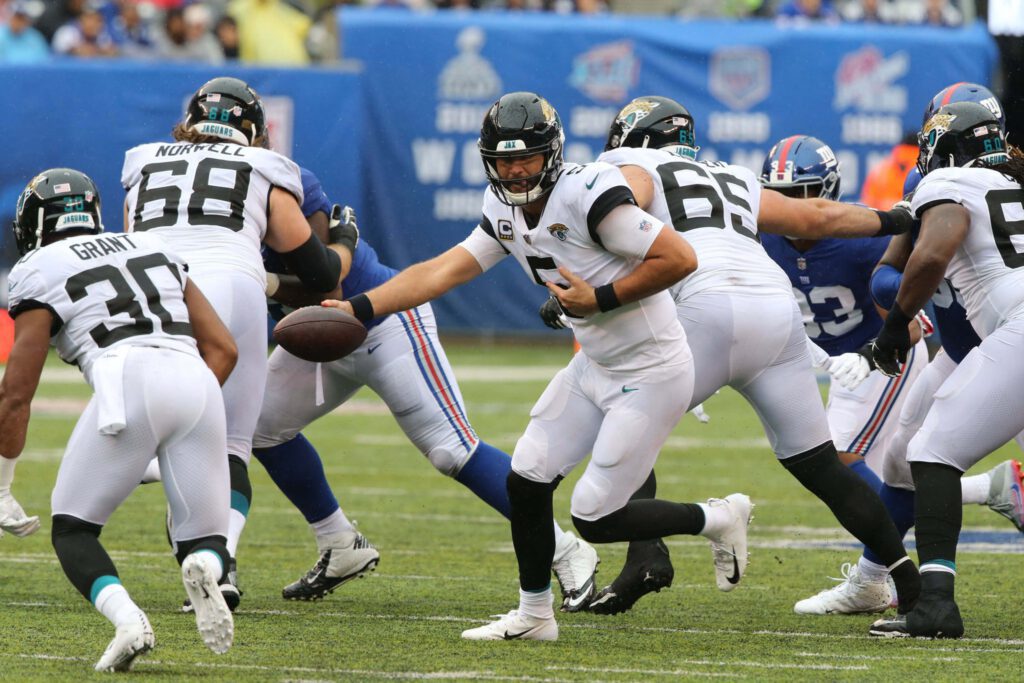 FOXBORO — As the Patriots gear up for a rematch of last year’s AFC Championship Game, the Pats defense faces a unique challenge against Jaguars quarterback Blake Bortles.

Bortles is often labeled the Achilles heel of a stacked Jacksonville team, ranking 20th out of 29 full-time starters last year with a 70.0 overall grade according to Pro Football Focus.

And that was considered a career year from a grading standpoint for the third overall pick in the 2014 NFL Draft.

However, although Bortles isn’t a top quarterback, the offense that the Jaguars and offensive coordinator Nathaniel Hackett run has morphed itself around Bortles to make the best of the situation.

How do they do that? By presenting Bortles with larger downfield throwing windows or short passes off of play action.

Last season, Bortles and the Jags offense ran play action 23.4% of the time, but it wasn’t the frequency that separates Bortles, but rather his statistical improvement when the Jags run play action.

And against the Giants in Week 1, it was more of the same for the Jaguars quarterback.

To be fair, most quarterbacks’ passing statistics improve on play-action schemes.

The play fake often leads to displaced defenders in the secondary that are a step or two behind on their coverage assignments due to the natural reaction to bite on the run fake.

But in Bortles’ case, it turns a mediocre quarterback into a serviceable passer for the Jaguars.

Below, I’ll walk you through some of the Jags’ favorite play action schemes and try to shed some light on how the Patriots defense will try to stop them.

The Jaguars offense is filled with “packaged plays,” which are schemes with multiple concepts in one play.

The Jags’ favorite package plays involve combining their outside zone running schemes with a screen pass to the flat. Bortles likely makes a read pre-snap based on the defense’s alignment. If the defense loads the box, then he’s going to throw the pass to the screen player, if the defense goes with a light box he’ll hand the ball off to the running back.

The Jaguars and running back Corey Grant destroyed the Patriots on screens off of play action on first and second down in January. On the play above, the Patriots are in a 3-4 alignment with a lot of the focus on the backfield action. The Jags also add an interesting wrinkle with Grant offset behind the tight end, leaving the only free defender, Trey Flowers, with a long run to make the tackle. The Jags get good blocks from the tight end and receiver to account for the other two Patriot defenders, and Grant goes for a big gain.

Another concept the Jaguars love is typically called “swap boot,” which involves a hard sell by the offensive line on a stretch zone scheme and a receiver usually lined at the end of the line of scrimmage.

As shown here, the receiver then runs a “swap” route, where he comes across the formation to give the quarterback an easy option off the bootleg action. The Jaguars love this scheme because they run a healthy amount of stretch zone, which makes it easy to sell, and it’s an effortless throw for Bortles. The Jags either sneak a tight end out of the blocking scheme to run the route, or in this case, they have wide receiver Keelan Cole running the route which adds speed to the concept for yards after the catch. They ran it multiple times against the Giants in Week 1.

MESH CONCEPT OFF OF PLAY ACTION

Lastly, besides throwing passes behind the line of scrimmage, the Jags also use fakes to take shots downfield.

The play fake often leads to wide open throwing lanes for Bortles, which is necessary due to his struggles with downfield accuracy.

Here’s one of their favorite concepts, the mesh concept, which has taken over the NFL. On the mesh, you’ll see two receivers cross over each other in the middle of the field, typically one on a post route and the other on a deep over or in-cut. The play action holds the linebackers while the deep patterns in the concept force the defensive backs to retreat downfield. That leaves Bortles with a huge window to throw the ball. The Jaguars frequently pick up chunk plays downfield off of these types of concepts.

The Patriots defense struggled to defend the Jaguars’ offense in the first three quarters of last year’s AFC Championship Game due to the heavy scheming and misdirection by offensive coordinator Nathaniel Hackett.

Rookie linebacker Ja’Whaun Bentley said the Patriots, “prepare every day for that kind of stuff,” a sign that the team realizes that it has struggled with defending these types of concepts in the past.

Bentley also said that, “You got a job on every play. There are 11 guys on the field so you can’t try to do everyone’s job,” suggesting that in last year’s matchup with the Jags the Patriots defense got caught peeking into the backfield too often instead of sticking to their assignments on certain plays.

Although Bentley wasn’t on the team for that game, he did say that the defense reviewed the matchup in January to learn from its mistakes.

The key for the Patriots in defending these concepts, as you typically hear down in Foxboro, is team defense, as it will take discipline and staying true to your assignment to keep the Jaguars offense from moving the ball in a similar fashion on Sunday.

If they can correct their mistakes from last season, the Jaguars will have to rely on Bortles to beat the Pats on more conventional passing concepts.