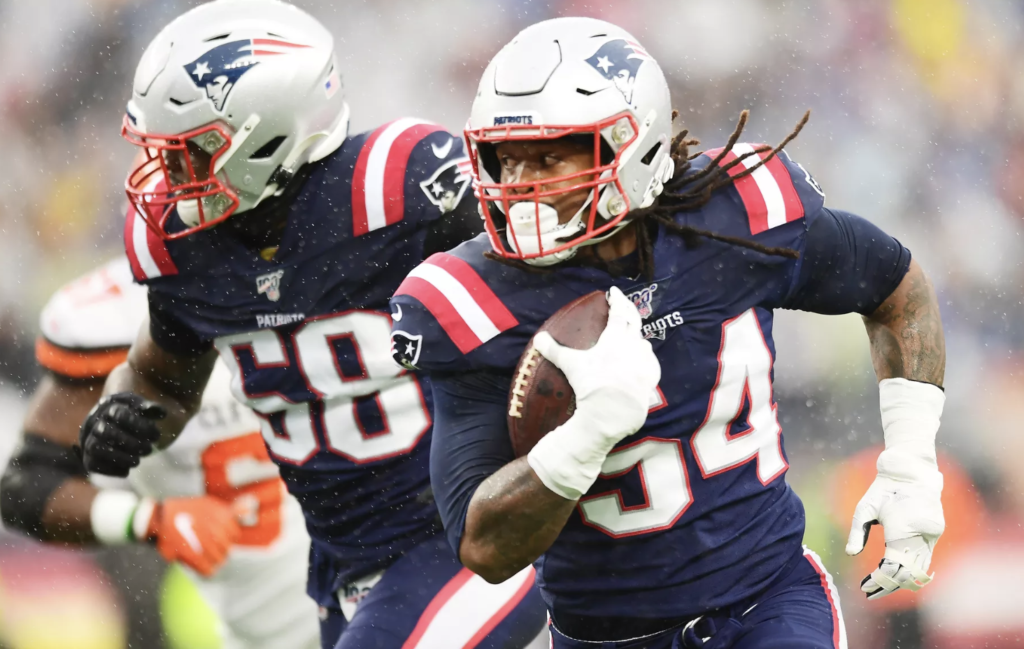 FOXBORO — On a raw, wet and windy day at Gillette Stadium, the Patriots defense proved once again that it’s the most overwhelming part of this perfect start to the 2019 season.

Dont’a Hightower returned a fumble 26 yards for a first quarter touchdown, Lawrence Guy set up another score with an interception of Baker Mayfield deep in Cleveland territory and Tom Brady fired a pair of touchdown passes to Julian Edelman as the Patriots improved to 8-0 with a 27-13 win over the Browns Sunday. Click here for a full boxscore. The fading Browns fall to 2-5.

The win was the 300th in the legendary coaching career of Bill Belichick, including regular season and the postseason.

Including the playoffs, it was the 20th straight win at home, dating to New England’s last loss at Gillette, a 33-30 last-second defeat to the Carolina Panthers on Oct. 1, 2017. With the Bills losing to the Eagles Sunday in Western New York, the Patriots have a 2.5-game lead for first place in the AFC East.

With K.C. and the Sunshine Band’s “I’m Your Boogieman” blaring throughout the stadium from the start of warmups, the defense did it again on Cleveland’s second drive of the game.

Nick Chubb ran to his right and ran into somersaulting left guard Joe Bitonio kicked the ball loose to the ground. Dont’a Hightower, the leader of New England’s “Boogeymen” linebacker corps, came along and scooped the ball and raced 26 yards for the game’s first touchdown and New England’s sixth return touchdown this season.

The play of the game came on Cleveland’s next drive when Chubb again got the ball in his hands and broke off a 44-yard run. Chubb appeared headed for the end zone when Jon Jones came in like a streak of lightning and stripped the ball from Chubb and Devin McCourty recovered on the wet turf.

The Patriots got one first down but had to punt. On the next next drive, Mayfield had the ball at his own 21 when he attempted to shovel a pass to Jarvis Landry. Instead, it landed right in the hands of Lawrence Guy.

Two plays later, Tom Brady hit a crossing Julian Edelman for six yards and a touchdown, giving Brady 12 touchdown passes this season, the most ever by a quarterback 42 years or older.

By the end of the first quarter on a raw, wet day at Gillette, the Patriots, thanks to three Browns turnovers, already had themselves a 17-0 lead.

The Browns finally broke through when they got the ball at their own 46 and drove to the Patriots 21. Mayfield dropped back and lofted a perfect pass to the left pylon and a touchdown to Demetrius Harris.

The Patriots appeared ready to add to their lead late in the second quarter when they drove to the Cleveland 11. The drive included the first catch by Mohamed Sanu on a pass over the middle in which he gained just enough at the Browns 20 on a 4th-and-4 pass over the middle. But a 29-yard Mike Nugent field goal attempt was blocked when Denzel Ward blew past Lawrence Guy and blocked the attempt. Chubb had 92 yards on 10 carries in the first half to go with his two big turnovers.

The Browns, thanks to more production from Chubb, opened the second half by driving to the Patriots 20 where the drive stalled. The Browns settled for a 38-yard field goal from Austin Seibert and the Patriots lead was down to seven, 17-10. It was only the third tim

But the Patriots responded with a seven-play, 84-yard drive, highlighted by a 59-yard dump off from Brady to James White on third-and-10 from the Patriots 16. The play put the Patriots in business at the Browns 25. Four plays later, Brady scrambled in the pocket just long enough for Edelman to flash open at the five yard line. Brady found him and Edelman did the rest for his second touchdown of the day for a 24-10 lead.

Watson made a diving catch down the seam for 26 yards to the Browns 10, setting up Mike Nugent’s second field goal, a 29-yarder to make it 27-10 midway through the fourth quarter.

The Patriots take on another AFC North foe next week when they battle the division-leading Ravens in Baltimore on Sunday night football.