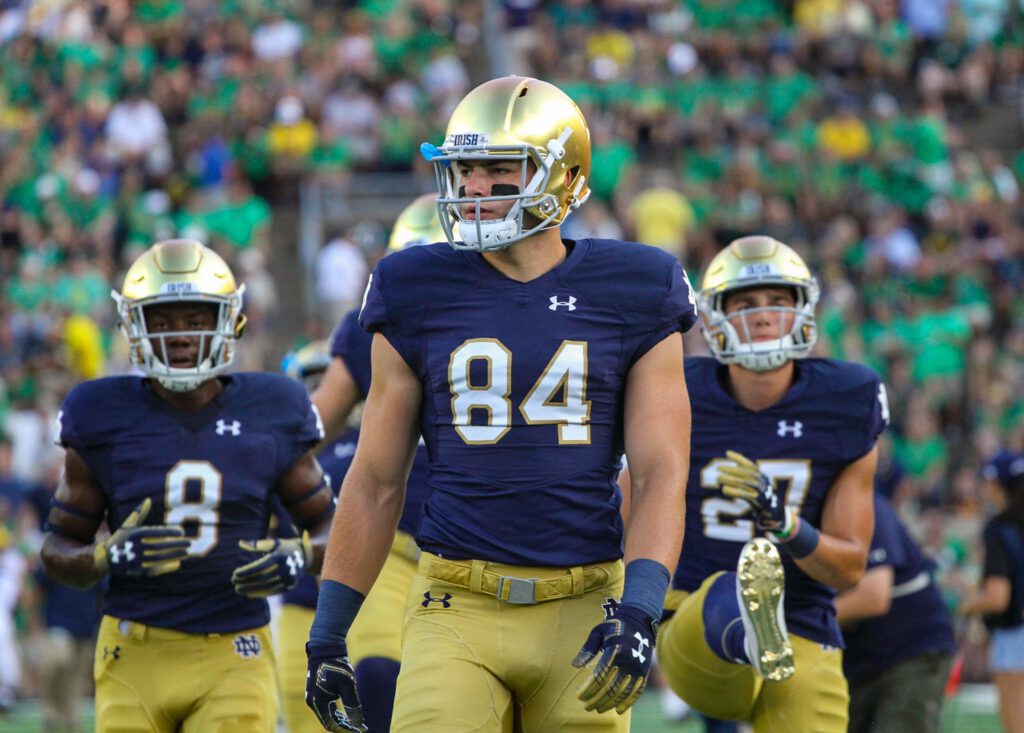 The Patriots need to improve their offensive weaponry as they begin life without Tom Brady.

In our last installment of the Patriots draft preview series, we took a look at wide receiver fits for New England. Now, we’ll look at an even dire position group at tight end.

The Patriots have two tight ends on their roster, Matt LaCosse and Ryan Izzo, with a combined 517 yards and two touchdowns on their career resumes, not exactly Gronk-level production, or even league average.

Unfortunately, the tight end class is lacking explosive playmakers early in the draft, and there are no first-rounders at the position this year, nor is there a top 50 prospect.

Since I started studying the draft back in 2017, this is the worst tight end class I’ve seen. But there are some useful role players on day two and three that might interest the Patriots.

Below, we’ll get into the best fits at the tight end position for New England, and how they win:

Background: Kmet committed to Notre Dame as a two-sport athlete in football and baseball. Starting with his sophomore season, Kmet began to focus on football and developed into a productive target last season. Although he isn’t the most explosive player, Kmet presents a significant size advantage between the hashes at 6-6, 262 pounds, finishing his final season in South Bend with 43 receptions, 515 yards, six touchdowns. He projects as a traditional in-line tight end that should be starting-caliber within his first few NFL seasons. As a rookie, he should at least offer upside in the red zone.

How He Wins: Kmet has above-average speed, especially for his size, and his 4.70-second 40-yard dash shows up when he runs the seam. The Irish tight end is a builder of speed rather than an instant-burst, but as the play above shows, he’ll get up the seam and make smooth adjustments to catch passes that are off-target or purposely thrown to avoid coverage; his hands might be his best trait as he snags passes outside his frame with ease. Kmet is a developing run blocker that has stretches of effective blocking but needs to improve his balance and hand technique to avoid falling off blocks. He has the size and functional strength to be a useful blocker at the next level, but he’s a better pass-catcher right now.

Background: a rapidly ascending prospect, Trautman was a High School quarterback that converted to tight end with the Flyers. Trautman earned first-team FCS All-American honors after posting 916 yards and 14 touchdowns last season. His short-area agility tested well in Indy, and he has plenty of size (6-5, 255 pounds) and strength to handle in-line duties. At the Senior Bowl, Trautman proved he could hang with stiffer competition, which will only get tougher as he makes the jump from the FCS to the pro level.

How He Wins: Trautman won’t run away from NFL defenders with pure speed, but his separation quickness and route-running technique offer intriguing receiving upside. In the example above, Trautman sees a high-low bracket from the defense, essentially a double team. He splits the double by running an effective corner-post pattern. First, Trautman threatens the over the top defender in his stem by flashing a corner route into the defenders’ blind spot. Once he sells the two defenders on the flag pattern, he smoothly transitions to the post and catches a touchdown between both defenders. Trautman’s fluidity for a big athlete is impressive.

Background: Moss is indeed the son of Hall of Famer and former Patriots star Randy Moss, but he is quite different from his father. Moss started his career at North Carolina State and then transferred to LSU following his freshman season. Due to his transfer, Moss sat out the entire 2017 season and didn’t play the following year either due to a broken foot. Finally on the field in 2019, Moss caught 47 passes for 570 yards and four touchdowns as a safety blanket for Heisman Trophy winner Joe Burrow. Unfortunately, team doctors discovered a Jones fracture in Moss’s foot that held him out of the combine.

LSU TE Thad Moss is an extremely impressive run blocker. Definitely a potential #Patriots target in this year's draft. Blocks on the line, on the move, whams. You name it, he did it for the Tigers. Big-time versatility & power at the point of attack (🔊) pic.twitter.com/WHteuhbxnv

How He Wins: Despite his last name, Thaddeus doesn’t possess the explosive playmaking skills as his father in the passing game. Instead, as the audio breakdown above illustrates, Moss is the best blocking tight end in this class with exceptional versatility, technique, and power. As a pass-catcher, Moss is a reliable underneath target with sure hands and an excellent radar for finding soft spots against zone coverage. Although NFL comparisons aren’t my favorite, Moss has a very similar skill set to former Pats tight end Dwayne Allen.

Background: Asiasi played at football powerhouse De La Salle High School in California. He took a pitstop in Ann Arbor as a freshman but decided to transfer to UCLA to be closer to home. Asiasi had just eight career catches heading into last season before blossoming in Chip Kelly’s offense to the tune of 44 receptions, 641 yards, and four touchdowns in 2019. Asiasi’s had some weight issues in the past that will need monitoring, but he offers more juice in his routes than others that will get drafted before him.

How He Wins: Asiasi displays good initial burst off the line to threaten coverage vertically, as you see defensive backs and linebackers reacting to his explosiveness on tape. In the play above, Asiasi does well to widen his stem to square-up the safety downfield to set up his break. He then shows great acceleration through his break to uncover on the post pattern and goes up to make the catch. As a run blocker, his technique needs work, but he’s willing with active feet to run through contact and finish plays.

Background: Okwuegbunam redshirted his first year at Mizzou to add weight to his slender frame. He had arguably his best season for Missouri as a redshirt freshman when he was second-team All-SEC. Okwuegbunam, or “Chuks” as his teammates call him, didn’t blossom into the prospect that some thought he would early on in his career, but his combine performance has him in the day two discussion. At 6-5, 258 pounds, Okwuegbunam ran a 4.49-second 40-yard dash, which puts him in the 97th percentile at tight end. He’s the most explosive athlete of the group.

How He Wins: Despite great size and terrific speed, Okwuegbunam’s tape is extremely underwhelming due to shortcomings in route running. His routes are filled with false steps and wasted movement, which makes it difficult for him to separate on anything that isn’t a deep crosser or vertical route. He also doesn’t have the functional strength to move anyone in the running game, so he’s currently one-dimensional as a field-stretcher. Still, as the play above shows, his speed to win over the top is a problem, and he makes outstanding downfield adjustments to track the ball over the shoulder.

Background: Keene ended up at Virginia Tech due to a close family connection with recently retired Hokies defensive coordinator Bud Foster, who coached his father, Wes, at Murray State. The Virginia Tech product is garnering a lot of interest from teams after testing in the 80th percentile at the combine, leading the class in SPARQ score. Like many college tight ends before him, Keene’s NFL outlook is mostly projection due to a limited role at Virginia Tech in the passing game.

How He Wins: Keene was a swiss-army knife for the Hokies as an in-line tight end, H-back, slot receiver, and fullback on offense. Plus, he was a core special teamer. Due to a limited route tree, it’s challenging to know what he’s great at as a downfield receiver. But his effectiveness as a ball carrier on schemed touches such as tight end screens gives you a feel for what he can do in space. As a blocker, Keene has some bad tendencies, like ducking his head into contact, but he’s willing and able to contribute in that regard.

Background: Breeland comes from a football family as his father, Garrett, played linebacker at USC and was drafted by the Rams in 1986. Unfortunately, Jacob suffered a knee injury in October that ended a very promising senior campaign where he had 405 yards and six touchdowns in six games. For many in this tight end class, that would be better production in six games than they saw in a full season. However, a good chunk of that came on schemed-open opportunities where Breeland was mostly wide open.

View #Oregon TE Jacob Breeland as a late-round prospect, potentially a UDFA, but he definitely has good ball skills.

Times out the right nicely on the fake screen, works to get outside the DB. Track, adjust, high point, strong hands to finish. Good ball by Herbert. pic.twitter.com/GTSiCVh6jC

How He Wins: Breeland was mainly an H-Back in the Oregon offense. But at 6-5, 252 pounds, he has the size to play in-line as well. Breeland’s best trait is his ball skills, where he excels at tracking and adjusting to the throws on vertical routes. On the play above, Breeland sells the screen to the wideout before releasing upfield. Then, he gets outside body positioning and uses his frame to shield the defender from the back-shoulder throw.