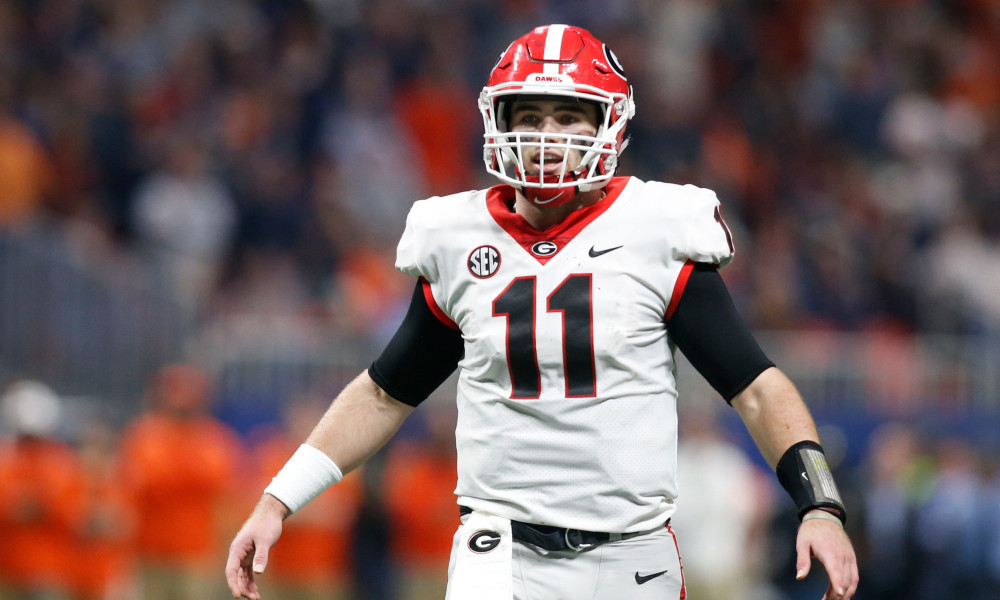 As the Patriots prepare for life without Tom Brady, the future at quarterback currently rests solely on the shoulders of Jarrett Stidham.

We are all aboard the Stidham hype train, but insurance policies are a must, so we’ll continue to preview quarterback options for the Patriots.

The trio presents competition for Stidham, not replacements, but all three could develop into starters down the road and should serve as high-end backups as they develop behind QB1.

Below, we’ll go through the film on Eason, Hurts, and Fromm to highlight what makes them intriguing players for the Patriots and areas they still need to improve to become pro starters:

There’s a wide range of opinions on Eason among draftniks as the 6-6, 231-pound pocket passer with a rocket arm looks the part but lacks the fundamental nuances of the position to be a sure thing.

Eason started in 12-of-13 games as a freshman at the University of Georgia but transferred after losing his starting job due to injury and the emergence of Jake Fromm (more on him later).

The University of Washington product is not related to former Patriots quarterback Tony Eason, but he does resemble another Pats great, Drew Bledsoe, who had the same general skill set.

Eason is intriguing due to his fit in a pro-style system that implements heavy amounts of play-action under center, which is the base of New England’s system in recent seasons.

During his NFL 100 interview, former Brady broke down one of his favorite play-action concepts that the GOAT reveals he stole from rival Peyton Manning.

On the play, the offensive line simulates a power scheme by pulling the backside guard as a lead blocker with the tight end or slot receiver releasing on an over route across the field. As Brady said, Gronk feasted on the concept, with the linebackers biting hard on the play fake.

The Huskies ran the play-action design regularly with Eason under center. He was at home turning his back to defense, snapping his eyes around to scan the coverage, and hitting open receivers in-stride off of similar route combinations to New England’s version.

Eason also loves to run play-action from shotgun, since he’s at his best when he can carry out fakes or utilize pre-snap motion to affect the structure of the defense.

On arguably his best throw of 2019, Eason flashes that arm strength to a backside post route for a touchdown. Along with the fake to the back, Washington sets up a fake screen to the quarterback’s left. Eason’s eyes in his drop hold the lone deep safety on the left hash. Eason then works back across the field, knowing there’s no help coming from a deep safety. His receiver beats the corner playing with outside leverage to the post, and Eason lets go of a frozen rope to fit the ball into tight coverage.

Eason also throws a pretty deep ball off of play-action, and he’ll anticipate deep shots rather than wait to see a receiver wide open. Here, the Huskies run two-back power with play action, and the Washington State defense is ready for the crosser by the tight end. However, with the safety taking the tight end, Eason knows he has one-on-one on the outside. He starts his windup before the receiver breaks free of man coverage, letting his wideout run into the throw rather than wait for the ball to get there.

Although Eason’s physical skills are eye-popping, it’s his play under pressure that makes him a volatile prospect and could make for a challenging transition to the NFL.

Out of the top quarterbacks in the class, Eason’s 37.6 passing grade while under pressure is by far the worst, per PFF, and the panic in his feet was noticeable when pressure was in his face.

The good news for Eason and whoever drafts him is that pocket poise can improve, and performance under pressure is unstable year-to-year as circumstances always change.

Eason could land in the backend of the first round due to his arm strength and prototypical size, but he fits the Patriots nicely as a high-upside project to develop along with Stidham.

Before we get into the on-field report with Hurts, we must first discuss the intangibles with the former Alabama and Oklahoma quarterback as he has face-of-the-franchise qualities.

Hurts became the first true freshman to start for the Crimson Tide since 1984 and then helped Alabama win a national championship in his sophomore season starting all 13 games.

A son of a coach, Hurts’s poise and maturity are well beyond his years. He’s a coach in the making, and teammates gravitate towards him as a leader. Even coach Nick Saban implored Hurts to remain at Alabama to back up Tua Tagovailoa as a junior season because of Hurts’s importance to the makeup of the team.

After finishing his education in Tuscaloosa, Hurts made the wise decision to transfer to Oklahoma to play for QB whisperer Lincoln Riley, who coached the last two number one picks.

With the Sooners, Hurts, a dual-threat quarterback, showcased his passing abilities and made massive strides under Riley’s tutelage, improving his footwork in the pocket.

"I don't see him getting out of the 2nd round."@MoveTheSticks likes what he sees from @JalenHurts 👇

Back in February, Hurts’s improved lower-body mechanics were on full display at the NFL combine. He’s now well-balanced and powerful in his base and drops, getting to his spot efficiently while generating power from his legs to drive the ball and throw accurately downfield.

Hurts has a better NFL outlook since improving his skills as a downfield thrower, and we can see building an offense with him as the starter that highlights his mobility and arm.

Both Alabama and Oklahoma took advantage of Hurts’s legs, but here’s a sequence from last season with the Sooners that shows the type of system he would excel in at the pro level.

In the first play in the sequence, Oklahoma runs a guard-tackle counter with a quarterback keeper. On the bottom right, you’ll see the safety responsible for that half of the field stay back, which lets Hurts turn the corner and get upfield for a ten-yard gain.

On the next play, the Sooners simulate the same GT counter with Hurts as the primary ball carrier. This time, the same safety as the play before now screams down to play the run. With the safety out of the middle of the field, Hurts pulls the ball down and hits superstar receiver CeeDee Lamb running across the field without help underneath, and Lamb breaks a tackle to run for a long touchdown.

Although Hurts is a capable passer and generally accurate, there are concerns about his processing speed, ability to identify coverage busts, and lack of anticipation as a thrower.

The 21-year-old is a “see it, throw it” kind of quarterback, meaning he can be gun-shy to test tighter windows and anticipate open receivers, opting to wait for a clear open target.

Here, we can see some of that delayed processing and unwillingness to pull the trigger. On third and short, Hurts’s first read is to an isolation slant route, but the edge defender on the line drops into the passing lane at the snap. Instead of coming off the slant, Hurts stares it down, missing the inside slot receiver for a touchdown on the opposite side. Hurts either didn’t see the open receiver in time or doesn’t want to throw it and ends up throwing the ball out of bounds after a short-lived scramble drill.

To become a long-term starter, Hurts will need to get through his reads faster and become a more willing downfield passer to throw receivers open and anticipate passing windows.

Hurts’ physical tools and intangibles present a good quarterback prospect for a team that’s willing to let him develop for a few seasons.

But his pro comparison might be closer to former Bills quarterback Tyrod Taylor than, let’s say, reigning MVP Lamar Jackson.

Out of the three quarterbacks featured, Fromm has the highest floor, but he also has the lowest ceiling due to pedestrian arm talent.

I think you’ll enjoy this… We were given this handout during a scout school from my time with the Ravens. Coach Belichick has held true to almost all of this over the years. pic.twitter.com/pWB3oqo5JU

NFL Network’s Daniel Jeremiah tweeted out an old handout from scouting school that Bill Belichick wrote in 1991. The handout goes through each position, and what scouts should be looking for in prospects to fit Belichick’s offensive system.

Under quarterback, Belichick’s three keys were: decision making, accuracy, and throwing mechanics and footwork. First, it’s easy to see how Tom Brady fits that description, and without comparing him to Brady on any level, Fromm checks most of those boxes as well.

Fromm took the starting job from Eason as a true freshman, leading Georgia to a national championship game appearance, and went on to start for the next three seasons. Along with Eason, he also forced Ohio State quarterback Justin Fields to transfer out of Athens.

In his three years as the starter, Fromm completed over 63 percent of his passes and threw more than four times as many touchdowns as interceptions piloting Georgia’s offense (78-18).

At his best, he’s an in-rhythm facilitator with clean mechanics that feasts on matchups, gets through full-field reads, and puts the ball in advantageous spots for his skilled playmakers while avoiding turnovers.

Here’s a great example of Fromm identifying a matchup pre-snap, reading the safety rotation, and placing the ball perfectly for a touchdown. Based on the corners technique, Fromm knows he has man coverage on the outside at the top of the screen with the ‘Bama defense showing a two-deep coverage. Fromm confirms that the half-field safety is staying on the vertical route from the slot, rather than rallying to the sideline. Knowing he’s got one-on-one, Fromm lays the ball out perfectly and connects with now Bears wide receiver Riley Ridley for six.

Fromm’s best qualities might get him the game-manager label, but he’s a great decision-maker and hardly ever turns the ball over, which is a strength regardless of preconceived notions.

On this play, Georgia has a bunch formation to Fromm’s left that has the inside receiver upfield on a dig route and the outside receiver on a shallow crosser. With the inside linebacker blitzing, the middle of the field opens up for the dig route, but Fromm correctly pulls it back with LSU safety Grant Delpit playing centerfield and breaking on the dig pattern. With the blitz picked up, Fromm patiently waits for the crosser and sets up a nice play after the catch with a simple throw.

Although Fromm’s decision making and timing fit the Pats nicely, his arm strength in the harsh New England weather could bump him down a notch or take him off their board completely.

As Fromm’s career wore on, his issues driving the football down the field and controlling the ball when he needed extra strength behind his passes became more apparent.

And his struggles when the Bulldogs put the game on his shoulders suggests he’s limited.

In only seven games with 35 or more drop-backs, Fromm had a 67.3 PFF grade completing just 52.8 percent of his passes for 6.3 yards per attempt; how much of the offense can he carry?

Here’s a cutup of a few of Fromm’s misses on longer throws downfield, and you’ll see that when he needs to fire a bullet or a deep ball, the ball flies all over the place, and he loses his accuracy.

The Patriots need a quarterback that can throw the ball through inclement weather, and that might not be Fromm.

But he’s their type of guy in every other way, and at worst, he’ll have a long career as a high-end backup.