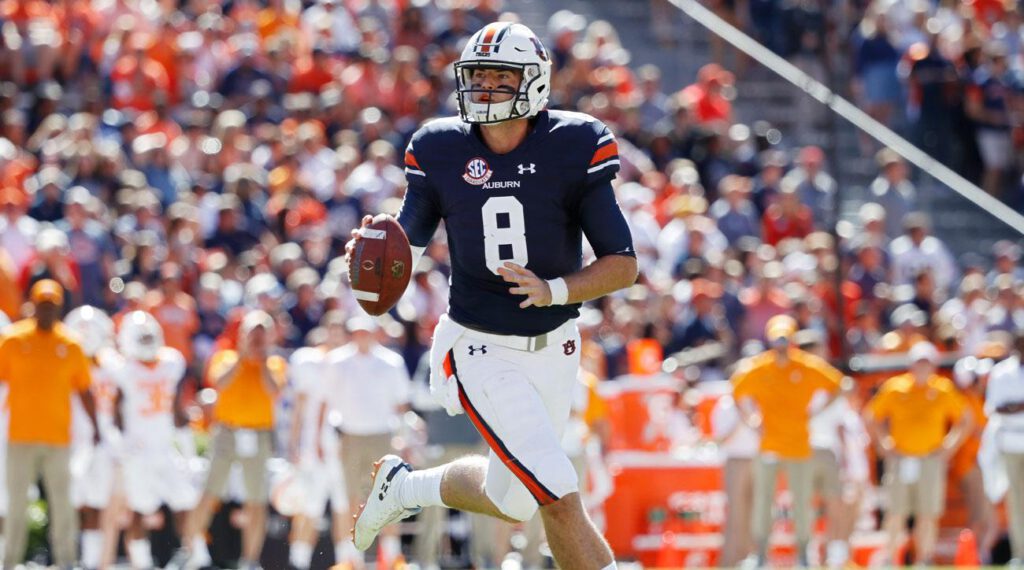 FOXBORO — With their seventh pick in the 2019 NFL Draft, the Patriots selected Auburn quarterback Jarrett Stidham in the fourth round.

The Patriots have selected a quarterback in four of the last six drafts, and every time they do, we have the same discussion: is this the successor to Tom Brady?

After a breakout sophomore season, Stidham was in the QB1 conversation for this class entering the 2018 season, but he had a disastrous year.

Before we get into his film, it’s important to understand the context around a subpar 2018 for Stidham with the Tigers.

First, there are reports out there that Stidham played through a back injury that plagued him for most of the season.

Second, Auburn lost multiple offensive cornerstones to the NFL including running back Kerryon Johnson and starting tackle Braden Smith, and he had a weak supporting cast.

And third, the Auburn offense wasn’t a great fit for Stidham as it forced him into an option-heavy attack rather than a traditional drop-back passing game that better suits his skill set.

Although there’s no sugarcoating his poor play, with every player, it’s essential to understand all the factors that contributed to their success or failure.

Now that we have a baseline understanding of the circumstances, let’s get into the pros and cons of Stidham’s skill set:

The Patriots felt comfortable drafting Stidham for a reason, and in this section, we’ll try to highlight his strengths.

One of Stidham’s most impressive qualities is his ability to find open receivers on his second or thread read in the progression.

On this touchdown pass, Stidham recognizes that the defense rotates into a single-high man coverage while six defenders come downhill at the line of scrimmage; all he has to do is trust his blocking and receivers to get open. Stidham works left to right (#1 – go route, #2 – crosser) before getting to his third option on a backside curl. Stidham’s timing and decision making are on point as is the throw because his feet and shoulders come with him finishing pointed at his target.

The #NFLDraft is close & if I’m looking for a sleeper QB-it’s Auburn’s @Jarrett_Stidham One of the toughest things to gauge is “what’s he do when staring down a big hit and #1 isn’t open?” 👇🏼 @JennaLaineESPN @PewterReport @LauraRutledge @finebaum Want your team to draft em? pic.twitter.com/fGI7wNM81z

Former NFL quarterback turned analyst Dan Orlovsky broke down another play that demonstrated Stidham’s ability to get through a progression above.

Standing in against pressure isn’t typical for Stidham, but he’ll work through there’s evidence that he can read the field when he’s patient in the pocket.

Stidham doesn’t have high-end arm talent, but he can make most throws, and delivers a catchable ball with the right amount of touch depending on the situation.

In particular, Stidham has several impressive touch throws outside the numbers dropping it in the bucket to his receivers.

On this completion, the new Pats quarterback stares down the safety in the middle of the field just long enough so that he won’t affect the throw and drops a dime over the shoulder of his receiver with perfect ball placement.

We’ll get to the inconsistencies with Stidham’s accuracy soon, but there’s enough proof that he can be consistent with these types of passes.

THROWING ON THE MOVE

Stidham isn’t an elite athlete, testing in the 38th percentile at the combine, but he’s not a complete statue in the pocket either and can make throws on the move.

Stidham feels the pocket collapsing around him and sees an opening to his right. He breaks the pocket, keeps his eyes downfield and makes a nice throw to an open receiver along the sideline.

At the NFL level, Stidham will have to be a pocket passer, but he can move off his spot and make some plays when the opportunity presents itself.

The Patriots hope to get the best out of Stidham, but there’s a reason that he went in the fourth round and why many quarterback experts aren’t high on him as a prospect.

Although there are some accurate throws above, Stidham’s downfield accuracy is a major concern for his success in the NFL.

According to Benjamin Solak’s contextualized quarterbacking data, Stidham ranked dead last in accuracy on throws past the line of scrimmage out of the nine quarterbacks in the study.

Accuracy is a tough thing to improve at the NFL level and most quarterbacks that are inaccurate stay inaccurate for their entire careers.

Based on some of the throws, Stidham’s accuracy issues could improve slightly with small improvements to his back foot (tends to drag) and eliminating some of the looping motion in his release, but his mechanics are generally solid. Improvements in accuracy will ultimately come from developing a better feel in the pocket and anticipating openings more consistently.

As is the case here, Stidham’s accuracy even in clean pockets isn’t good either as his 79.6 passing grade from a clean pocket ranks 24th among draft-eligible quarterbacks, according to Pro Football Focus.

The Patriots have time to refine Stidham’s mechanics, but it’s unlikely that he’ll ever have pinpoint accuracy.

Stidham made a good throw under pressure above, but the vast majority of the time he struggles to operate when there are defenders around him.

On this play, you see how pressure affects Stidham. To his credit, he takes a shot in the pocket to make the throw, but Stidham holds onto the ball too long failing to anticipate the open window and the pass is nowhere near his attended target nearly leading to an interception.

As the pressure started to snowball on him, Stidham admitted that he became impatient in the pocket and didn’t feel comfortable behind his offensive line.

Here, you see him look to bail on a clean pocket, but when he realizes there’s nobody in his face, he carelessly resets and unloads a throw over the middle that should’ve been intercepted.

Stidham’s lack of poise in the pocket and poor accuracy could be his undoing in the NFL.

The Patriots saw something they liked in Stidham to invest a fourth-round pick on the Auburn quarterback.

From all accounts, and based on their pre-draft meetings with him, Stidham has some face of the franchise qualities as a leader and student of the game.

“I love watching ball,” he told me. “Whether it’s college, pro, I just love learning more about football and picking people’s brains and that sort of thing. So, I would definitely say I’m a football junkie.”

However, Stidham has a long way to go before I crown him as the successor due to his deficiencies as a passer, and his presence on the roster shouldn’t deter the team from shopping for the quarterback of the future as we move forward.

With that said, he’s the closest thing to the successor that the Patriots currently have on the roster, and offers significantly more upside than 2018 seventh-round pick Danny Etling.

From a talent-level standpoint, Stidham is in the same ballpark as 2016 third-round pick Jacoby Brissett when he entered the league.

Stidham is worth the investment as the Patriots take as many swings at finding the next guy.