Patriots Far from Perfect in 37-20 Loss to Ravens 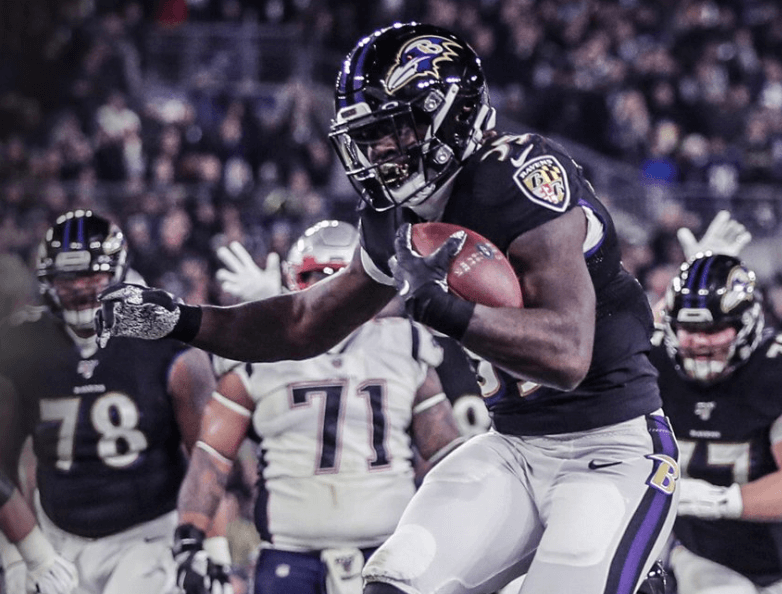 BALTIMORE — The Patriots perfect dream is over.

The Patriots could not overcome uncharacteristic mistakes and an early 17-0 hole, falling, 37-20, before a raucous sellout crowd at M&T Bank Stadium. The Patriots lost for the first time in nine outings and head into their bye week with an 8-1 mark. The Ravens improved to 6-2. Click here for the full box score.

The Ravens came out and accomplished something no one else has this season: They attacked the Patriots defense, scoring on the opening drive, the first time the Patriots had allowed a touchdown on the opponent’s initial drive of the game.

Lamar Jackson was the star. He was 4-for-4 for 41 yards while running the ball three times for 13 yards.

The killer penalty was a neutral zone infraction by Shilique Calhoun as the Ravens lined up for a 24-yard field goal attempt as the Patriots appeared to have the Ravens stopped at the Patriots 6. The penalty gave the Ravens first-and-goal from the 3. On the next play, the Patriots bit on on the run into the middle of the line while Jackson kept the ball and ran untouched to his left for a touchdown. It marked the first time since Oct. 6 in Washington that the Patriots had trailed in a game.

The Patriots went three-and-out on their first possession of the night and gave the ball right back to Baltimore.

Another 11-play drive ensued, with the Patriots finally stopping some of Lamar Jackson’s rhythm and momentum at the New England 21. Justin Tucker was good from 39 yards and it was 10-0, the largest hole the Patriots faced this season.

The Patriots were dominated in the first quarter in every category. The Ravens ran 22 plays to New England’s seven. The Pats gained just one first down to Baltimore’s 11. They were outgained 133-4 in yards and Baltimore held the ball for 12 minutes and 48 seconds while the Patriots had the ball for 2:12.

Things didn’t get better in the second quarter, as the Ravens continued to gash New England’s defensive line. They needed just three plays to go 77 yards, highlighted by a 53-yard run by Mark Ingram that took the Ravens down to the Patriots 12. Gus Edwards ran it in nearly untouched on the next play to increase the lead to 17-0.

The momentum finally took a swing in the Patriots’ direction early in the second when former Patriot Cyrus Jones muffed a punt at his own 15 and it was recovered Justin Bethel at the Ravens 20. Four plays later, on a third-and-goal from the 4, Tom Brady hit Mohamed Sanu on a four-yard out to the left for a touchdown, Sanu’s first with the Patriots.

The Patriots got another huge break when Kyle Van Noy forced an Ingram fumbled at the Baltimore 16. Lawrence Guy recovered at the 19. The Patriots drove it to the Ravens 3 where they had to settle for a 22-yard Nick Folk field goal and the Baltimore lead was down to 17-10. The Patriots forced a punt with 1:51 left in the first half.

The Patriots put together a drive of eight plays, covering 81 yards to gain more momentum before the half. It appeared James White had come close to reaching the ball over the goal line after falling to the ground at the 1 but he was ruled down by contact and the Patriots had to settle for a 19-yard field goal from Nick Folk that made it 17-13 Ravens at the half.

The Patriots received the ball to start the second half and were marching down the field after a pair of completions to Mohamed Sanu. But on a wide receiver screen to Edelman, Patrick Onwuasor stripped the ball and Marlon Humphrey picked it up and raced 70 yards for a touchdown and the Ravens led 24-13.

The Patriots, as they often do, wasted little time responding. Brady engineered an 11-play, 75-yard drive, capped off by James White’s one-yard plunge off the right side and it was 24-20.

The Ravens came back with a drive of their own, marching down the field and making it a two-score game again when Lamar Jackson hit tight end Nick Boyle on a crosser from six yards out. Justin Tucker missed the extra point and the Ravens led, 30-20, with just over 14 minutes remaining. The key play was a fourth-down conversion when Jackson hit Willie Snead on a seven-yard out in front of Jason McCourty on 4th-and-4.

Brady took a beating all night and was intercepted by Earl Thomas on a third-down heave from the Baltimore 48. Thomas returned the pick to the Ravens 32. From there, the Ravens took the ball and drove down the field against an exhausted Patriots defense. Jackson capped a 14-play drive consuming 9:35 when he kept his legs going on a 1-yard plunge with 3:12 remaining. The touchdown sparking M-V-P chants from the Ravens faithful.

The Patriots return to action in two weeks when they travel to Philadelphia to take on the Eagles at Lincoln Financial Field.