Taking a look at the betting lines for New England's first eight games of the 2022 season. 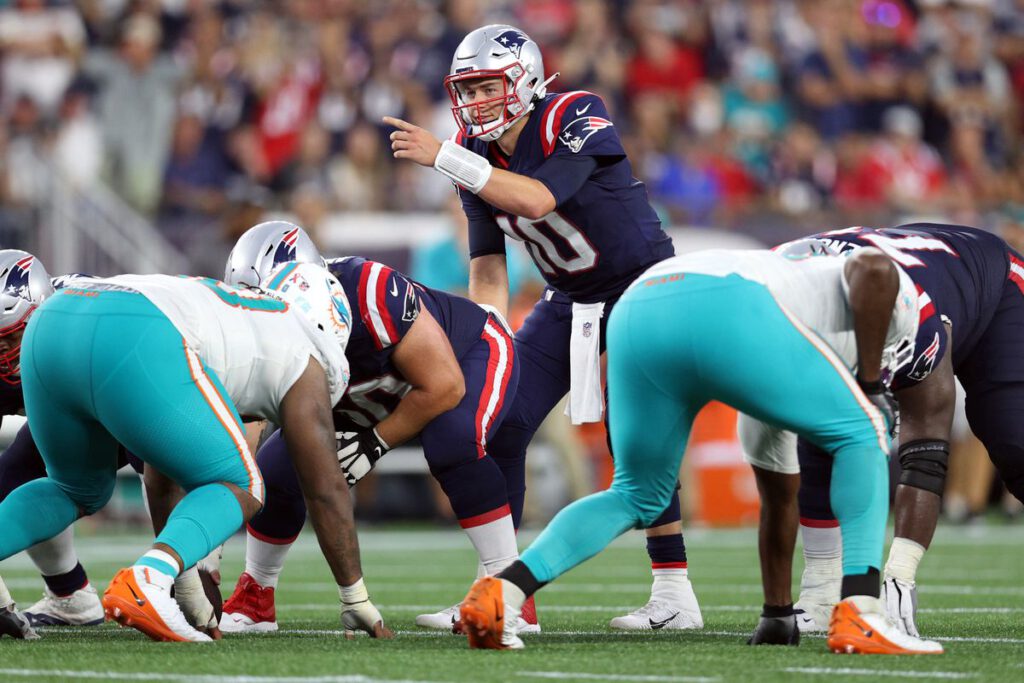 For the first time since their tumultuous season-ending loss to the Bills last January – it is officially game week for the Patriots. They’ll head to Miami on Tuesday, and will take on the Dolphins this coming Sunday, September 11th.

Former Alabama quarterbacks Mac Jones and Tua Tagovailoa will face off for the third time in their careers, and new Miami head coach Mike McDaniel will make his debut.

I’ll have a more extensive Pats vs. Dolphins preview later in the week, but for now I’m going to take a quick peak at each of the New England’s first eight games, and give a prediction and betting pick using BetOnline.ag’s odds:

Week One: Patriots (+3) at Dolphins

As I said, the Pats are headed to Miami for the first week of the season this coming Sunday, and frankly – I don’t see a win happening for them. They’re way too new to this offensive scheme, and they haven’t played well in Miami for several years. The Dolphins will win and cover -3.

In their second game on the road in as many weeks, New England gets themselves in the win column. If matchup was several weeks later, when Pittsburgh (hopefully) has their QB situation under them, then I might give them the win. For now, though, I think the Pats can handle their business in week two.

The Patriots return home to Foxboro on September 25th to take on the Baltimore Ravens. The Ravens sport the most dynamic quarterback in football in Lamar Jackson, and continue to bring a stout defense alongside him.

I don’t see this going well for the Patriots. I think New England gets punched in the mouth in their home opener. Baltimore wins handsomely.

The Patriots will face a far superior team for the second week in a row when they travel to Green Bay to take on the Packers in week four. Aaron Rodgers is arguably the best quarterback in football, and New England having to play at Lambeau Field after just getting whopped by the Ravens doesn’t make this game any easier.

After two beat downs, New England will get themselves back in the win column in week five – but Detroit won’t make it easy on them. I love what the Lions have in Dan Campbell at head coach. He’s gritty, he knows how to motivate grown men, and he actually has an idea of what he’s talking about from a football perspective too.

Unfortunately, that’s not enough for Detroit. Pats win on a last second field goal, but the Lions cover +5.5.

Now that the Patriots are back to some winning ways, it’ll be time to really turn it on when the Bears come to town.

Chicago is one of the few teams in the NFL that’s in a worse position than New England – they’ll show that in week six. Their offense (outside of Justin Fields) is a complete joke, the defense is shopping their best player in Roquan Smith, and the organization as a whole is a dumpster fire. The Pats get their second W in a row with a dominant win against Chicago.

ALL ABOARD! The Patriots train finally has some momentum – and it’s heading to the Meadowlands.

I like what the Jets have going for them so far this offseason. They have young talent, and Zach Wilson will (presumably) be back from his knee injury by week 7.

However, after New England winning two in a row, I don’t think that will be enough for the Jets. Pats win by 7.

From the highest of highs to the lowest of lows, it’s time for New England to come back to earth. After a three game win streak, New England gets a reality check against Indy – just like last year.

For the second year in row, this time at Gillette, the Colts end the Patriots winning streak. Indy win outright.