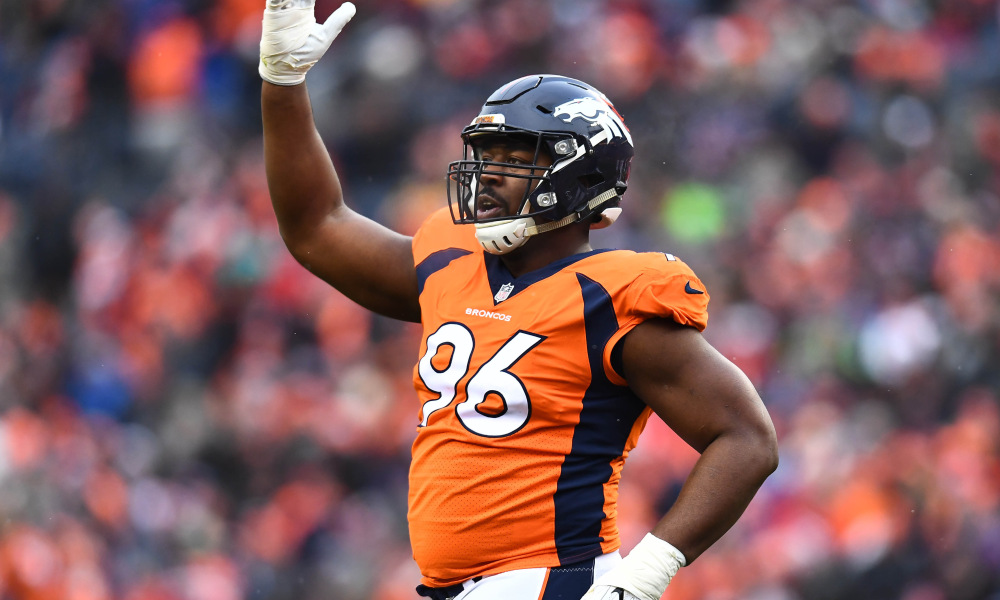 As the Patriots begin to rebuild, New England has as many holes to fill on defense as they do on offense, which is where Bill Belichick usually does his best work.

We’ve talked about the Patriots’ struggles on first and second down for months. Although it’s a passing league, a team built to stop the pass can only flex those muscles when they get into favorable down and distances.

New England’s defense ranked 29th in expected points added per play and success rate last year on first and second down, which was the big-picture problem.

The Pats were dead-last against the run in Football Outsiders’ DVOA metric, surrendered 5.2 yards per rush on outside runs (28th) and 9.4 yards per pass attempt against play-action (30th).

New England’s defensive linemen were one-dimensional while the linebackers couldn’t set the edge, lacked sideline-to-sideline playmakers, and couldn’t cover the middle of the field. Thus, the Pats couldn’t rely on Belichick’s third-down magic.

Now the question is, how do they fix it? For Belichick, his success rate drafting in the front seven is much better than targeting skill players in the draft, so it would make sense to go that route.

The Pats’ football czar typically avoids paying top-dollar for edge rushers, which was the case when he let Kyle Van Noy and Trey Flowers walk while trading Chandler Jones before he got paid.

As he often does, Belichick could bridge the gap between immediate need and young players in the development stages with veteran stop-gaps. Maybe some of the recently released cap casualties, such as Van Noy, could return to reestablish depth.

Although it goes against Belichick’s usual team-building strategies, we can’t completely rule out a big signing on a front seven defender given the Patriots’ amount of cap space.

Before we get to the rankings, the top two off-ball linebackers in Tampa Bay’s Lavonte David and Buffalo’s Matt Milano re-signed with their respective teams this week. The rest of the class is a bit underwhelming and lacks system fits that are potential difference makers. The Pats might need to rely on the draft for that.

Below, we’ll rank the available free agents on defense by their overall value and fit in the Patriots’ system:

(Note: the only player that I didn’t include that could be a possible “splash” signing on defense is Yannick Ngakoue. The Patriots liked him in the 2016 draft, they might still like him, but he’s expensive and lacks versatility. Ngakoue is best as a wide-nine rusher with little responsibility against the run, and I don’t see that as a scheme fit. Ngakoue is certainly a better player, but schematically, it would be a bit like Adrian Clayborn.)

Harris is likely at the top of New England’s market but he had a monster game against the Patriots last season that probably caught Belichick’s eye (three pressures, two batted passes, run stop). Harris has quietly been a top-ten interior lineman over the last three seasons, grading out as the eighth-best IDL in football in 2020, per PFF. He plays with excellent leverage, pad level, and reactive quickness against the run, making him very difficult to block. Harris can also rush from multiple alignments along the line, playing both as a B-gap defender and a five-technique over the tackle with a few snaps on the nose sprinkled in. As a pass rusher, Harris’s quickness and length are challenging to contend with, making him a three-down player that’s perfectly built for a 3-4 defensive end role. At this point, the days of Harris being underrated are probably over, so it’ll cost the Patriots to bring him aboard. But there’s no better match of need and skill set in this year’s free-agent market.

The contract projections on Judon are a bit silly, and if he hits those kinds of numbers, he’ll likely land out of the Patriots’ price range. Having said that, Judon is an ideal edge defender in Belichick’s scheme that is good in all facets, even if he isn’t dominant in one way. Baltimore’s scheme has some different details than New England’s, but both systems ask similar things out of their edge rushers. Judon’s responsibilities include setting the edge of the defense, occasionally dropping into coverage or as a QB spy, and rushing the passer within the scheme’s framework. The Ravens run an exotic blitz package that features Judon in various schemes that avoid one-on-one pass-rushing, and he was productive in his role. Does all that sound familiar? Judon’s market might get pricey, but it’s easy to see his game translating nicely into the Patriots’ defense. He’s been on my radar for a few years now.

This one is easy. The two elements of Van Noy’s game that don’t get talked about enough are his prowess against the run and football IQ. KVN essentially has five seasons in New England’s system if you count his one year in Miami, so he knows this defense inside and out and can play inside or out. The versatility and experience are great. The ability to set the edge is even better. Although he wasn’t worth the contract the Dolphins gave him, he was still productive last season (31 QB pressures, 27 stops). Van Noy seems like a perfect candidate for a Jamie Collins-like return to the Patriots on a one-year deal that resets his market value.

My affinity for Reddick dates back to the 2017 draft, where he went 13th overall to the Cardinals. The former first-round picks’ story is similar to Van Noy’s in that Arizona tried him out at off-ball linebacker, where he failed, before moving him back on the line last season, where he flourished. Reddick put up 56 quarterback pressures back in the spot he played in college, which was tied for 11th among edge defenders with Myles Garrett, and forced six fumbles. There are some concerns with Reddick against the run, but most of those stemmed from reading things from a different vantage point last season. With more reps back on the edge, he has the athleticism to round out his game. Reddick is a little undersized for the Patriots’ typical mold, but they’ve made expectations for that lately with Josh Uche and Chase Winovich. With pass-rushing upside, Reddick fits as a 3-4 outside linebacker.

Just like with teammate Kenny Golladay, the question with Okwara is whether or not he enjoyed the Matt Patricia experience in Detroit. Okwara had a career year with the Lions as an edge rusher in Patricia’s system, so he already knows the defense. Plus, he has good length and power to push the pocket with a relentless motor. Okwara finished the season with ten sacks and 61 quarterback pressures, but received a 45.0 run defense grade and didn’t always play with the best technique as a run defender. Still, at 6-4, 275 pounds, he fits the mold of a Patriots defensive end and has familiarity with their techniques and terminology. Okwara had a breakout year under Patricia, and could come to New England to build on last season.

If Judon prices himself out of the Patriots’ market, Bowser is the discount version with similarly great versatility. Bowser is an effective pass rusher with 33 quarterback pressures on 284 pass-rush snaps, posted a solid 71.7 grade against the run, and has the athleticism to drop into coverage. Again, the Ravens use their edge defenders in a very similar way as the Patriots, so you can turn on Bowser’s tape and already see him doing Patriot-like things. It’s a straightforward evaluation, and the price isn’t too crazy either.

Perryman is a throwback linebacker that plays the game in Belichick fashion. No, he’s not a modern-day coverage linebacker that flies around the defense. But he posted an 86.3 grade against the run and plays their brand of football. Based on his tape last season, Perryman would present an upgrade over Ja’Whaun Bentley as the primary early-down MIKE and run-stuffer. On the one hand, it upgrades a role that we know will remain in the Pats defense for a small cost. But on the other hand, Belichick might want to modernize how he views linebackers.

Rankins had issues staying healthy over the last two seasons in New Orleans, but he’s an effective run defender when he’s out there. Rankins is very flexible for a 300-plus pounder which allows him to stay low and anchor in his gaps. He also has a decent first step to penetrate and reset the line of scrimmage. Rankins can play a shaded nose tackle role or as a 3-4 defensive end and used similar techniques in the Saints’ system as he would with the Patriots. The injuries are a concern, but if you pay him accordingly, he’d be a useful player.

Jones spent the last three seasons in Mike Vrabel’s defense, which we know has some carryover to the Patriots. At 6-4, 320 pounds, Jones is a monster that has excellent length and two-gapping abilities. He can play nose tackle or as a B-gap run defender and isn’t a complete zero as a pass rusher. But it’s the length and power at the point of attack that makes him a Patriots fit. Just your typical large human that is difficult to move in the running game.

Hooker is the lone defensive back on my list with an eye towards the future of the free safety position in New England. As a former 15th overall pick, Hooker has elite range and ball skills in the deep middle. However, he has dealt with multiple significant injuries, including a torn Achilles last season. The idea here would be to take a flier on Hooker’s upside and see if he can be a Duron Harmon-type where he plays in centerfield on passing downs. If he can handle that and stay healthy, there could be a future for Hooker with the Pats as a long-term replacement to Devin McCourty. He’s still only 24 years old and has the first-round talent. The Patriots like those kinds of gambles.

Clowney is down here because I’ve tried to speak this one into existence many times and failed. At this point, it’s beginning to feel like the Patriots don’t like the player, at least at his going rate. Clowney is a physical force off the edge that was extremely disruptive against the run. He is a little more flash than a disciplined edge-setter, with the latter being the Pats’ usual preference, which could be part of their past hesitations. As a pass rusher, Clowney is at his best when he’s getting help from the scheme through stunts and reps as a standup rusher over the guards. Belichick would help him by moving him around the formation in passing situations instead of asking him to beat his man one-on-one consistently. The only other possible hiccup is that former Pats exec Michael Lombardi previously said that Clowney’s work ethic might not meet New England’s standards. If that’s the case, their lack of interest makes sense, but Clowney would be a great scheme fit on the field.

Dupree is a risky investment. He has one season of high-level play in 2019 and was okay a year ago before tearing his ACL last December. However, he plays the game with a red-hot motor and the physicality that the Patriots covet on the edge of the defense. Dupree has no issues taking on blockers in the trenches, stepping into fullbacks or pulling guards, and will come at players in the open-field like a missile. Most of his sacks are schemed rushes or clean-up sacks. But there’s a chance in New England’s scheme that they can get the all-around playmaker he was in 2019.