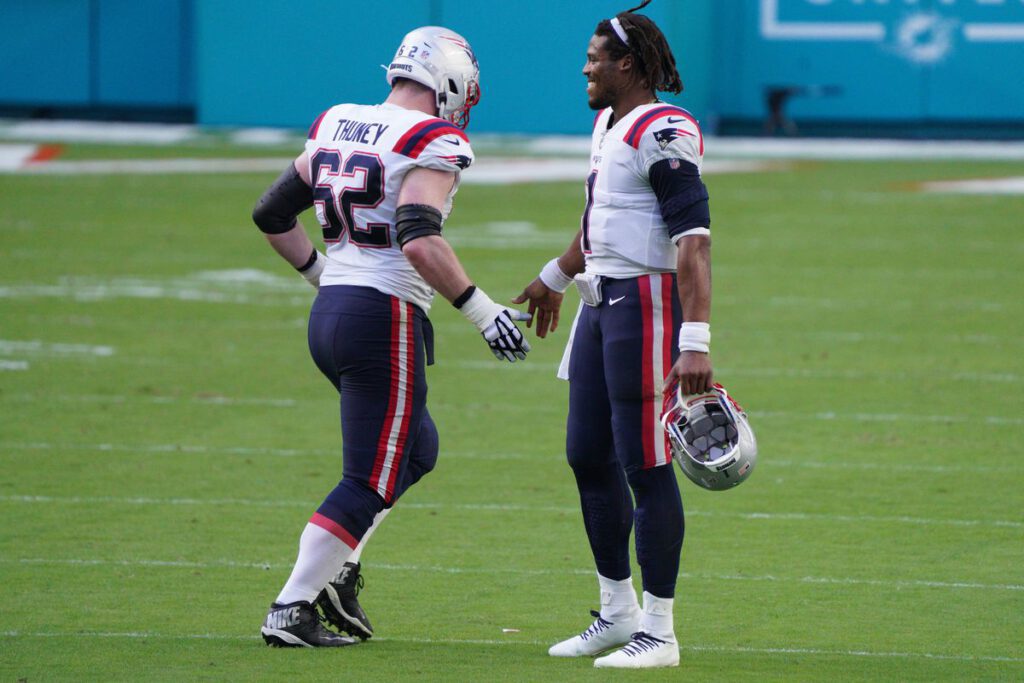 The Patriots are entering an unprecedented offseason in the Bill Belichick era that could see a complete overhaul of their offense at quarterback and the skill talent around the quarterback.

New England is currently leaving no stone unturned in pursuing outside help as Belichick is making calls to just about every team that is shopping offensive firepower this offseason.

However, the veteran quarterback and receiver market’s asking price is currently too high for the Patriots’ liking, and no negotiations have reached advanced stages as of yet.

Although looking outside the organization for upgrades is a must, the Patriots also have several critical decisions to make about their own free agents heading into the 2021 league year.

Belichick shocked us all when he placed a one-year franchise tag on starting guard Joe Thuney last offseason, but as of now, the Patriots aren’t expected to use the franchise tag in 2021.

Still, Thuney and current quarterback Cam Newton headline a free-agent class on offense for the Pats whose fate will answer questions about where the team is heading offensively.

Below, we will discuss seven key free agents on the offensive side of the ball for New England and the likelihood that they’ll return to the Patriots for the 2021 season:

Starting with the quarterback, we’ve already broken this down in every way possible over the last few months. New England hasn’t closed the door on a return for Newton because, like many other teams, they’re still shopping for an upgrade. That could come via the draft as the Pats continue to do their homework on the 2021 quarterback class. However, with each passing day, it seems more unlikely that it will be a veteran unless a reclamation project like Jimmy Garoppolo or Marcus Mariota is released. Newton had several obstacles to overcome this past season, including a COVID-shortened training camp, contracting COVID-19 himself during the season, and a lackluster group of pass-catchers surrounding him.

Although there’s some belief that improved circumstances would lead to better results, it’s also clear that Newton would be returning on another one-year deal as a bridge quarterback. The question for Belichick is, will that quarterback in the draft play a similar style to Newton (Trey Lance), or will he be a more traditional pocket passer (Mac Jones)? It would make sense for the former to learn from the best dual-threat quarterback of his generation, but Jones and Newton play the position entirely differently. The Alabama quarterback isn’t going to be running quarterback sweeps or zone reads at any point in his NFL career. Having the rest of the offense train with a running quarterback to give way to Tom Brady-lite seems like a waste of everyone’s time. Still, the feeling is that the Pats would rather bring back Newton, who has one year under his belt in the system and was well-liked, then start over with the Ryan Fitzpatrick’s of the world.

As we mentioned earlier, the Patriots held Thuney in such high regard last offseason that they evaporated nearly half of their available cap space to retain him on the franchise tag. However, the two sides have yet to reach a long-term deal making it more likely that he’s about to walk. Thuney is about to reset the guard market as a free agent, and with the Patriots’ depth along the offensive line, including one well-paid guard in Shaq Mason already, and David Andrews’s free agency, Thuney will likely price himself out of New England. The Pats can easily slide second-year sensation Michael Onwenu inside to left guard while COVID opt-out Marcus Cannon, 2020 sixth-round pick Justin Herron, 2019 third-rounder Yodny Cajuste and potentially a rookie battle it out for the starting right tackle job. New England has several different ways to replace Thuney, their most dependable and consistent offensive lineman over the last few seasons, making an excellent guard expendable. Nobody saw the tag coming last March, so let’s not write-off a return yet. But it’s hard to see it happening this time around.

Retaining Andrews is a big one for the Patriots. Although Thuney is a better player overall, Andrews is the heart-beat of New England’s operation and a team captain. The line reaches a different level when he’s out there as a field general, and he’s a solid player in his own right, ranking 14th among 36 qualified centers in Pro Football Focus’s rankings. Andrews took a slight step back in run blocking a year ago, but his consistency makes him a very reliable center, and his knowledge of New England’s protections and blocking schemes will be invaluable to a new or young quarterback. At 28 years old, Andrews still has plenty of football left, assuming his off-field health complications are behind him, which was the case last season. Factoring in a very doable price tag for a team with $63 million in cap space, Andrews should be back.

White and the Patriots could be heading for a split. It’s hard to imagine White in a different uniform, but the 29-year-old might be better off in a different situation. White’s play took a step back last season, with a tragic car accident leading to his father’s death and his mother’s hospitalization being a significant factor. In Newton’s struggles with short accuracy and timing, White had his lowest catch output (49) since the 2015 season and took a major step back in blitz pickup in 2020. As a passing downs player, White knows better than anyone that picking up a blitz is a key factor for Belichick and Josh McDaniels for a player in his role. White allowed 12 quarterback pressures in pass protection this past season, almost as many as his previous five seasons combined (15). White departing for a more stable situation that’s closer to his mother’s home in Florida, yes, maybe Tampa Bay, could be in the cards.  Lastly, the Patriots might already have White’s potential replacement on the roster in 2020 UDFA J.J. Taylor, who coaches like to compare to former Pats running back Dion Lewis. If White leaves, it will mark the end to a fantastic career that will end with him in the Patriots Hall of Fame.

The reason we are pegging this one as a “high” chance of return is twofold: 1. Burkhead’s expected market should cost the Patriots next to nothing on a one-year deal and 2. He was a more effective player than White before another injury ended his 2020 season. Until the emergence of Damien Harris and Jakobi Meyers, Burkhead was New England’s most effective offensive weapon and did a little bit of everything out of the backfield. He’s a reliable runner between the tackles and gives you value in the passing game. Plus, Burkhead and the team have negotiated modest deals to keep the running back with the Patriots in the past, including a pay cut last offseason even after Tom Brady’s departure. Taylor could be the next in line for the pass-catching back role, and Harris and Sony Michel will handle the early-down carries, but Burkhead could bridge the gap between White and Taylor. The 30-year-old running back also plays a prominent role on special teams for the Pats, which we know Belichick values.

Byrd had a nice first season with the Patriots and is a capable field-stretcher on the outside. Byrd’s 4.27-speed is more effective stopping down off of his vertical stems to create separation than he is at getting behind the defense. His ball tracking, catch radius, and ability to play through contact at the catch point limit Byrd’s ability to win on true deep balls downfield. Although Newton could’ve been more accurate at times, Byrd’s size prevented him from making contested grabs downfield, a must for vertical threats at the NFL level. You aren’t always going to be five yards behind the defense. Sometimes, the receiver needs to go up and get the ball. Plus, his speed doesn’t exactly translate in YAC mode due to his hesitancy as a ball carrier in the open field (-0.8 YAC over expected). If New England were to retain Byrd in a reduced role a la Phillip Dorsett, he’s capable of making plays in the offense. However, the Patriots need a more consistent threat at the “X” spot, and Byrd is a finished product at this stage of his career. If the Pats want Byrd’s skill set on the roster, a rookie with developmental upside that can still fly could be an upgrade. Jaylen Waddle (first round), Dyami Brown (second round), and Jaelon Darden (third round) come to mind in the draft.

Eluemunor started the season at right tackle for the Patriots but lost his job due to injury and the outstanding play of rookie Michael Onwenu. My sense is that Eluemunor gets a look as a spot-starter or top backup elsewhere while the Pats go younger with Onwenu, Cannon, Herron, and others in the mix. Eluemunor is an NFL offensive linemen, but there isn’t a starting spot for him in New England.

Contract projections via Over the Cap and Spotrac