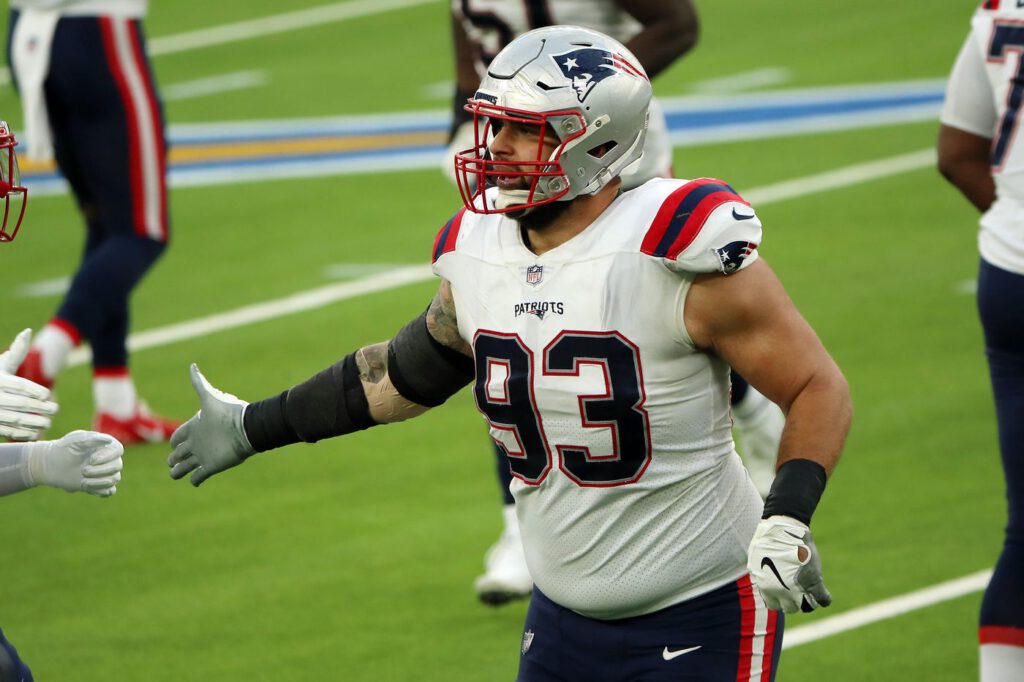 Although the focus is on offense and the quarterback position, Patriots head coach Bill Belichick has plenty of work to do on the defensive side of the ball this offseason.

New England’s defense nearly had a first-to-worst type collapse last season when they fell to 26th in Football Outsiders’ DVOA metric after leading the league in DVOA in 2019.

The Patriots already received good news with COVID opt-outs Dont’a Hightower and Patrick Chung set to return for the 2021 season, which was a significant reason why the defense fell apart.

Hightower, in particular, was a massive loss from a leadership, physicality, and production standpoint as the Patriots sorely missed his presence in the middle of their defense.

With Hightower sitting out the season, New England was dead-last against the run in DVOA and got gashed on outside runs where they allowed a league-high 4.9 yards per rush.

Failing to set the edge, occupy and defeat blockers along the line of scrimmage, and flow to the football from the second level broke the Pats’ defense on early downs.

New England ranked 29th allowing 0.127 expected points added per play on first and second down a year ago, which led to fewer chances for a still productive third-and-long defense.

To lean on a talented secondary and a great third-down rush package, the Patriots need to figure out their early-down defense, starting with retaining players that are part of the solution.

New England is also expected to pursue reinforcements this offseason for their depleted front seven, particularly along the defensive line where they were short-handed and lacked impact players.

Below, we’ll discuss New England’s key free agents on the defensive side of the ball and the likelihood that they’ll return next season:

The Patriots could get away with tendering restricted free agent JC Jackson at the second-round level, but with a difference of just over a million dollars, it’s an unnecessary risk. Jackson is an ascending player second only to Xavien Howard in interceptions over the last three seasons. The feeling I get speaking to a few league sources is that a team would be willing to sign him to an offer sheet and give up a second-round pick. A first? Probably not. The Patriots could tender Jackson at the second-round level to gauge his market for a long-term extension and then match it if they like what they see. But the safest bet is the first-round tender which buys them time to figure out a long-term deal as they did with fellow undrafted cornerback Jonathan Jones.

Although the team and Guy haven’t had advanced discussions about a return yet, it’s hard to see another team valuing the run-stuffing 3-4 defensive end more than the Patriots. Guy is a block-eating, two-gapping machine that plays with terrific leverage and block anticipation to take on double-teams as well as anyone in football. That skill set has value in certain schemes, like in New England, but free-agent defensive linemen that don’t add pass-rush production don’t usually break the bank. Plus, the Pats need to improve their defensive line this offseason, and losing one of their only reliable run-stuffers would set them back even further. Another team could swoop in, maybe down in Miami, but I expect Guy to return.

All options are on the table for Butler, including a return to the Patriots, and there’s mutual interest there, as I reported a few weeks ago. Butler had a strong second half of the season where he logged 19 quarterback pressures and ten run stops in the final six games of 2020. The Pats’ coaching staff loves his selfless attitude to occupy blocks and attract double-teams on the interior, presenting favorable matchups elsewhere along the line. Plus, Butler is also great as the penetrator on New England’s line stunts. Allowing him to focus on one-gapping and firing into the backfield led to more production against the run, but his inconsistencies with pad level and leverage make Butler primarily a passing downs player. The only reason this reunion doesn’t happen is if Butler wants to play in a more aggressive defensive front where he can develop a larger role with his get-off and length, making him difficult to handle inside. Butler is a reliable role player for the Patriots, but he might be a starter in a penetrating-style front.

According to a league source, the Patriots and Wise have had minimal contact to this point of the offseason. Wise, like Butler, hasn’t developed into an every-down player for the Patriots because of his issues against the run. There are spurts where he plays with good leverage and unlocks his length to build a wall at the point of attack. But it doesn’t happen consistently enough for the coaches to trust him in a more expanded early-down role. On the other hand, Wise is one of the league’s most productive pass rushers on a per snap basis using a series of stabs and chops to win with excellent hand technique and length as a pass rusher. Wise has 57 quarterback pressure over the last two seasons and ranked in the top ten in pass-rush win rate. Another team might have a more prominent role in mind for Wise, who might benefit from a scheme change.

Based on their podcast conversations, the McCourty twins plan on playing another season, but Jason is a free agent. At some point, the Pats will probably go younger at cornerback, and the two sides won’t have serious talks until we get closer to March 17. Still, if Devin is playing in New England, it’s hard to imagine the Pats rocking the boat by telling Jason to walk. McCourty had an unlucky season a year ago; he had the two most improbable completions of the season completed into his coverage, both touchdowns. He is a great mentor, will keep the team leader in brother Devin happy, and provides reliable depth. I think it’s safe to assume this one gets done.

Simon was a successful signing as veteran depth in 2018 and 2019, but the Patriots will likely move on from Simon with recent draft picks Josh Uche, Anfernee Jennings, and Chase Winovich as replacements. As we mentioned earlier, setting the edge was a massive issue for the Pats defense last season, and Simon was one of the league’s worst players at his position. The veteran ranked 105th out of 109 qualified edge rushers in PFF grade (48.3) and managed just 12 quarterback pressures on 240 pass-rush snaps. Simon was thrust into 702 snaps last year due to their lack of depth at the position. The Pats are likely to seek other options like a potential reunion with recently released linebacker Kyle Van Noy.

Brooks was a pleasant surprise in his first training camp and preseason with the Patriots after signing on as a special teams ace. He had a productive 2019 season working alongside Patrick Chung in the box. But things ended poorly in the 2019 postseason when he allowed the games’ only touchdown and a critical third-down reception into his coverage. He then struggled in 2020 (13.9 yards per reception) and was passed on the depth chart by rookie Kyle Dugger and Adrian Phillips. Belichick loves his special teamers, but with Chung returning and Dugger and Phillips also rostered, there isn’t a spot for Brooks.