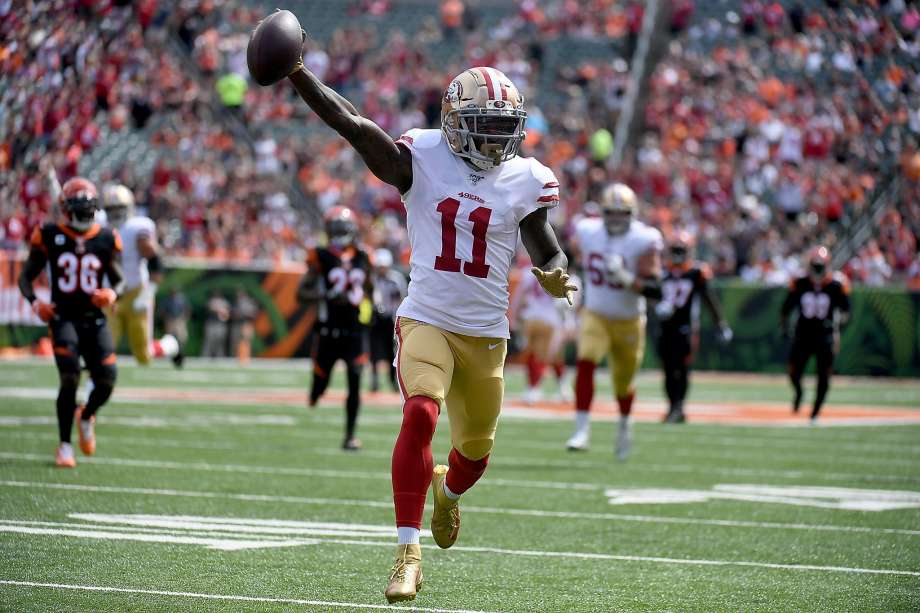 The Patriots had one of the more obscure wide receiver situations in recent league history in 2019, and that isn’t hyperbole.

At one point, they had Julian Edelman, Antonio Brown, Josh Gordon, a budding Phillip Dorsett, and rookies N’Keal Harry and Jakobi Meyers developing in the background.

But the positive vibes quickly vanished; Edelman got hurt, Brown and Gordon didn’t last, Dorsett’s breakout stalled, Harry missed the first nine games due to injury and then struggled, the Sanu trade failed in year one, and the receiver carousel continues to spin for New England.

Looking ahead to the 2020 season, we should be cautiously optimistic that both Harry and Meyers have better football ahead of them. Harry will have a lot to prove, but he’ll hopefully carve out a role with improved usage, health, and route running.

Edelman and Sanu were both banged up down the stretch. Barring a significant development, Sanu is in the teams’ plans.

Although it would be nice, both the Vikings and Browns are reluctant to trade their star wideouts, Stefon Diggs and Odell Beckham, Jr., at this time. Neither seems likely to move this offseason.

Below, we’ll go over some realistic trade and free-agent targets for New England:

49ers head coach Kyle Shanahan confirmed reports that Goodwin is available in a trade, which is no surprise given the depth San Francisco has at the position.

The Patriots could move on from Phillip Dorsett this offseason, and although Goodwin doesn’t significantly move the needle, he’d seamlessly transition into Dorsett’s role in the offense.

With Goodwin, we aren’t talking about fast. We are talking about world-class speed that’s the closest thing to Tyreek Hill outside of Kansas City.

Here, Goodwin isn’t running at full tilt and he’s gaining ground on the safety on a go ball. Then, he hits another gear as he draws closer to safety Tyrann Matthieu, and makes the Honey Badger look like he’s standing still.

Goodwin is a threat to score from anywhere on the field, which makes him difficult to handle on slant routes and schemed touches (screen, reverses, etc.).

And because he’s so fast, defenders need to play off-coverage against him. On the play above, Goodwin runs a filthy “blaze out” with some help from a giant cushion by the defender. By selling a post with his eyes and hips, the corner flips inside to match, and then Goodwin breaks out to create big-time separation.

The question for Goodwin has always been about health. In his lone season playing the full 16 games, he averaged over 17 yards per reception amassing 962 receiving yards.

If he can stay on the field, Goodwin makes sense in the Patriots offense.

What’s the best way for an offense in need of speed to get faster? Add the 40-yard dash king.

The start of Ross’s career in Cincinnati was a wild one filled with injuries, inconsistent play from him and his quarterback, and living in Marvin Lewis’s dog house for rookie season fumbles.

Benching the ninth overall pick because he fumbled a few times is terrible coaching, but I digress.

Similarly to Goodwin, Ross could take over the Dorsett role and potentially offer more upside.

The guy can fly, and he’s got decent lateral agility to stop and cut quickly for a burner. As the play above shows, the flashes are there for Ross. He angles his stem into the boundary, attacking the corners’ outside leverage, which forces the defender to stay open to the sideline. Ross then stops down, accelerates through on the dig route, and hits the gas to run away from the defense for a touchdown.

Over the last two seasons, Ross is averaging nearly 15 yards per reception to go along with ten touchdowns, seven in 2018 alone.

The Titans might make the fifth overall pick in the 2017 draft available, as he enters his fourth season with the team unlikely to pick up his fifth-year option.

Davis hasn’t lived up to his draft status, failing to eclipse 900 yards in any of his first three seasons with only six career touchdowns, but he has immense talent.

The 6-3, 210-pound receiver has a competitive attitude with a knack for tracking the ball on deep targets, working the intermediate level of the defense, and is a terrific run blocker as well.

In Tennessee’s play-action heavy offense, Davis was particularly effective on crossing patterns in their bootleg series. Working on the quarterback’s left, Davis gets the cornerback to move to the outside with a sudden and efficient release. With a path open to the inside, he stems vertically upfield to get the defender in a trail position. Then, he snaps off the route and holds the angle coming across the field to prevent the corner from disrupting the catch point—just a simple “over” route, but with solid attention to detail.

Davis isn’t as dangerous as teammate A.J. Brown after the catch, but he’s strong on the ball and will run through tackles on occasion and got a few touches on wide receiver screens.

Something is holding Davis back from breaking out because, physically, he’s got it all. The Patriots might be the team to get the best out of him if the Titans are serious about a trade.

The least likely but not entirely far-fetched, Jones is also the best receiver on the list.

Over the last four seasons, Jones’s 27 receiving touchdowns are tied for seventh, and he had a 1,100-yard campaign back in 2017. He’s one of the more underrated receivers in the league.

Jones excels as a vertical receiver on the outside thanks to excellent route releases, ability to get vertical after moving laterally at the line, and elite ball tracking and body control to make adjustments on throws.

The Lions wideout turned 30 years old on the Thursday before the start of the league year and is in the last season of a five-year contract. The rebuilding Lions might look to move on.

Nobody is saying this is likely. It seems near-impossible given the Patriots’ cap situation. But if you believe some reports and think Belichick can get creative, anything can happen.

Cooper is one of the best route runners and separators in all of football, precisely what New England needs, and you have to think a Brady return is more likely if he ends up with the Pats.

According to Pro Football Focus, Cooper’s 89.9 receiving grade against man coverage is the sixth-best mark among wide receivers since he joined the Cowboys.

Amari Cooper epitomizes the phrase “every route is a fade, until it’s not.” Inside shuffle at the L.O.S consistently moves the CB and makes each stem a mirror image of one another. Keeps his pads low to always be selling vertical and snaps his eyes out of breaks. Technician. pic.twitter.com/LFvVpuDeiv

Here’s an excellent film thread on Cooper by receiver guru Brad Kelly. Speak it into existence.

How many times have we theorized that Sanders would end up in a Patriots uniform? At some point, it has to happen, right? Well, we are nearing New England’s last chance.

The 33-year-old Sanders is still playing at a high level, ranking 22nd among wideouts with a 77.0 grade from PFF, and his route-running savvy and hands (one drop in 2019) are undeniable.

Sanders can run Edelman-like option routes with the best of them, but he’s at his best on out-breakers from the boundary or a slot alignment.

Here, Sanders avoids Peterson at the line of scrimmage with a stretch release that moves the Cardinals corner inside, opening up an outside lane. Once Sanders gets on Peterson’s upfield shoulder, he gets upfield without giving away the route. Then, he suddenly breaks to the outside to convert on third down.

In this example, Sanders is out on the boundary and works inside-out. He freezes the defender by taking a false step behind himself, which lets him win to the inside. He keeps his pads down and accelerates to sell a go route, and then stops on a dime and transitions his hips seamlessly to an out pattern.

There’s mutual interest between Sanders and the Niners to get a deal done, but his fit with the Patriots remains evident.

As one of the better vertical route runners in the league, Gabriel can sell false breaks at full speed. On the play above, he sells a corner route with the defense playing cover-three. Malcolm Jenkins, the deep safety responsible for the middle third, thinks the outside corner has Gabriel on the flag route. Once Jenkins rotates down, Gabriel breaks on the post, and it’s over.

He can also add value as a ball carrier on wide receiver screens and reverses, showing some nifty moves in the open field to go along with the home run speed.

The Bears released the veteran wideout to save some cap space, and the fit with inaccurate quarterback Mitchell Trubisky wasn’t great for a five-foot-seven receiver.

Hear me out on this one before you laugh in my face. Perriman might’ve saved his career down the stretch last season with the Bucs, finishing the year with 645 yards and six touchdowns.

The biggest area of improvement in Perriman’s game this past season was his route releases. He became a legitimate deep threat in Tampa by shaking defenders at the line more consistently to get his 4.24 speed at 6-2, 212 pounds rolling upfield.

He also became a productive field-stretcher from the slot, where he caught three of his six touchdowns a year ago, mostly on slot fades and seams.

Here, he uses a little inside stutter move to release into the boundary on the slot fade. With the defender unable to get his hands on him, Perriman gets vertical and shows impressive speed and tracking abilities to create late separation with the ball in the air.

Perriman’s role with the Patriots could resemble Patterson’s two years ago, with gadget plays as well as traditional pass routes in his repertoire, and he has more route-running upside than CP.

To be honest, I’m not the biggest Agholor fan. He was horrible last year for Philadelphia and not to question effort, but his lack of compete for the ball at times was damning.

Agholor finished 111th out of 122 receivers in overall PFF grade, but his speed and versatility to play in the slot make him a fit. Plus, he’s in their typical financial parameters.

My biggest concern with his game in their offense is that he tends to overthink things struggling with the mental aspects of the game, and he struggles in contested catch situations.

With that said, he’s one of the faster receivers in the league, making some chunk plays in the passing game during his time with the Eagles.

Philly also worked him open on pick plays and crossers to let him run after the catch.

Wouldn’t be the guy I’d sign, but I could talk myself into Agholor on the cheap.

A true bargain-hunting move, Higgins is someone we’ve mentioned in the past as a luxury item in Cleveland playing on a restricted free agent tender a year ago.

Now an unrestricted free agent, Higgins will likely seek opportunities elsewhere after amassing only 11 targets sitting behind Odell Beckham, Jarvis Landry, and others with the Browns.

How much would it cost to get #Browns RFA Rashard Higgins for #Patriots? Bigger perimeter receiver with strong hands, good catch radius and better change of direction than expected. Runs the whip/return on play one. Nice sit against zone to show off the strong hands on play two. pic.twitter.com/QmLN1lRLUH

The Browns wideout plays the game at a good pace, has strong hands, and will hit defenders with some sneaky change of direction skills on quick-hitters like slants and whip routes.

Higgins could develop into a nice complementary piece with more snaps in a different offense.