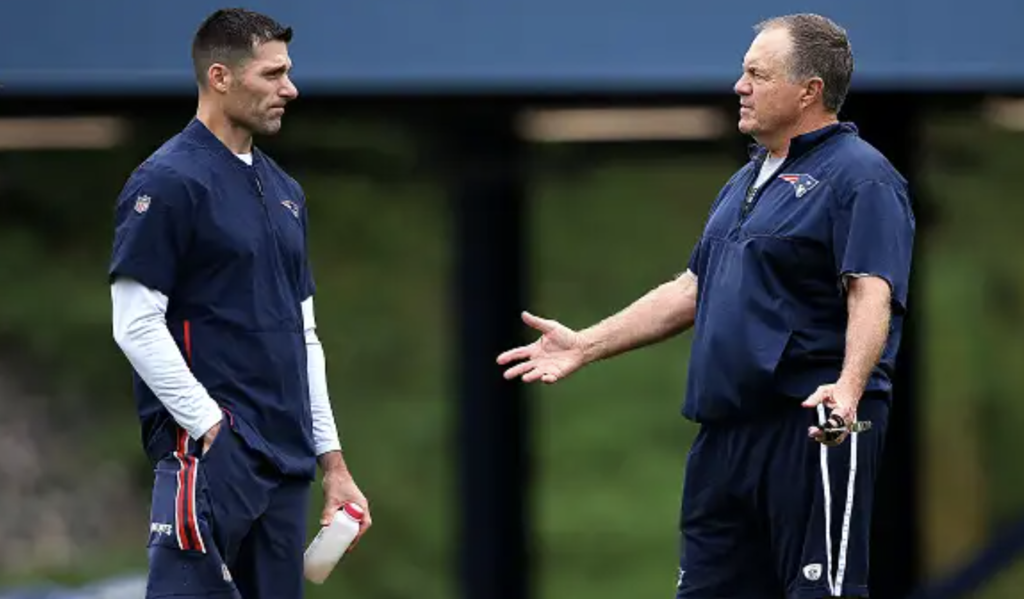 Patriots fans can feel disappointed all they want.

All the angst and handwringing in the world won’t change the way Bill Belichick and Nick Caserio look at and handle the NFL Draft.

Not that we needed further proof but that was proven again Thursday night when they traded out of their first-round pick at No. 23 overall and moved down into the second round at No. 37 with the Chargers, picking up another third-round pick to boot at No. 71.

As the first round was unfolding, it appeared the receiver the Patriots reportedly coveted in Justin Jefferson from national champion LSU was about to fall right into their laps. But alas, the receiver who spent the season catching darts from overall No. 1 pick Joe Burrow was scooped up by the Vikings at No. 22.

“I think we go into these drafts pretty open-minded,” Caserio told me. “We really look at everything on a case-by-case basis. Like we talked about in the past, you always have to be prepared to pick, which we certainly were ready to pick. We had a handful of players we were discussing and the opportunity came up with the Chargers that we thought made sense.

“Each situation that comes up, we look at it on a case-by-case basis and we do what we feel is the best. I don’t think we go into it and say, “OK, if this happens we’re going to do this.” We don’t look at it that way. We just look at what’s in front of us and make a decision, then we move forward with whatever decision that we make.

There were still talented impact players to be had available to New England. But Caserio and Belichick, with the virtual big board in front of them in separate houses decided to move back and pick in the second round.

“We were having discussions with the Chargers, and they went ahead. We kind of saw how the pick went. We were kind of on the clock at the time and we made the pick. In the end it worked itself out,” Caserio added. “The Chargers put themselves in position to do what they wanted to do, and we thought it made sense. We could have very easily gone the other way and picked a player, which we would have done.

“I don’t think what happened in front of us necessarily dictated what we ultimately did. I think we just looked at the information that we had in front of us, went through it, made a decision to check out of it. So that’s what we did.”

Could the Patriots have used linebacker Kenneth Murray, versatile interior offensive lineman Cesar Ruiz or another Arizona State receiver in Brandon Aiyuk? Definitely. LSU linebacker Patrick Queen and TCU corner Jeff Gladney were also there for the taking. But no dice, Patriots fans. Oh, and yeah, quarterback Jordan Love was there, too.

The Patriots have spent the better part of two decades building their roster like this and they’re not going to change now, even with Tom Brady in Pewter and Red on Florida’s Gulf Coast.

More picks on Day 2 means more than one pick on Day 1. The Patriots are about the substance of the overall draft than they are about making a PR splash with a first-round pick.

“We have enough picks where if we had to move around,” Caserio said. “We have the four late-round picks. We had the three picks in the third round, fourth round. Kind of going back to what I said a little bit earlier, everything is looked at on a case-by-case basis. I would say it’s more circumstance than anything else. This is where we are right now. At least we have an idea.

“We’re sitting there at the top of the round here. We’re five or six picks out; we’re 37 or whatever it may be. It wasn’t something that we said we definitively have to move, try to bridge that gap a little bit. I don’t think that was the discussion. I think, like I said, if we didn’t trade, we would have talked about the same thing, a player we picked at 23, then could have been talking about picking back in the second round possibly. I would say there wasn’t any intentionality behind it. I think it’s kind of just what the end result was.”

There’s something else to consider. With more ammo on Day 2, they have the ability to move around much more now and possible package, let’s just say the fourth-round pick acquired for Rob Gronkowski this week and a third rounder picked up from the Chargers to move into the second round. Maybe the Patriots see more value in two second picks than one pick in the first.

“Right now we have five picks, they’re kind of spread out a little bit, with one at the top of the second, then really kind of all littered throughout the third round,” Caserio added. “It’s not the same but similar I think I’d say it was 2009. Like we ended up making those four second-round picks together. That was the [Patrick] Chung year. We took Chung at the top of the second round. We ended up picking four players in the second round. It just gives us some flexibility.

“You can move around in the middle there a little bit. Late-round pick is a late-round pick. You look at them all together, you basically have 12 picks in five rounds, so we’ll see. Like I said, we’re going to look at what’s left, then kind of recalibrate, move around a little bit. We certainly have the ammunition, the flexibility to do so. Like most picks and/or trades, it’s all player-driven, right? If there’s a player you feel you need to move to get, you can go ahead and do it. We’ll see how it all goes. I would expect us to pick more players tomorrow. How we pick them ultimately will be determined by what we’re looking at and how much we actually end up moving.”

Maybe someday the Patriots will actually see value in picking in the upper half of the first round if they fall on hard times and actually ever post a losing season again.

But another 12-4 AFC East-division winning season yielded a pick in a spot of the first round they clearly didn’t value as much as some might have thought from the outside. But that’s the thing. Nearly everyone is on the outside and not privy to what Belichick, Caserio, scouts and Ernie Adams are thinking.