Patriots Game Plan: A Five-Step Plan for the Patriots to Get-Right Against the Jags

Here's how the Patriots to get the ship pointed in the right direction. 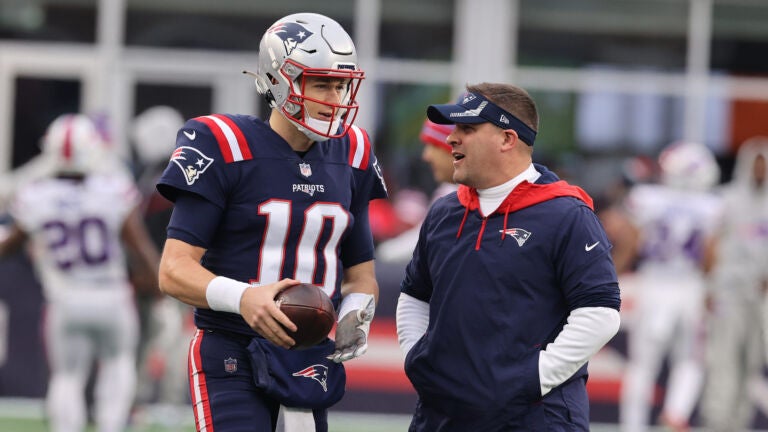 These Patriots are no strangers to adversity after starting the 2021 season at 2-4.

New England’s situation following an overtime loss to the Cowboys wasn’t all that different from this week’s matchup with Jacksonville.

The Pats had a punching bag to take out their frustrations coming to town in the Jets, then dominated New York in a 54-13 drubbing at Gillette Stadium.

After hanging a 50-piece on the Jets, Bill Belichick’s group rattled off seven-straight wins and were at the top of the AFC standings.

There are only two games left compared to 11 back in October, but the Patriots need a get-right game against the Jags to jumpstart the engine as they try to make a run come January.

Although it was with two pillars of dynasty 2.0 and the GOAT, it wasn’t that long ago that the 2018 Patriots rediscovered their confidence with wins in their last two games after consecutive December losses.

We aren’t suggesting that Mac Jones will lead the Patriots on a 2018-like run. But if there’s any hope for postseason success, Jones needs to beat the Jags like it’s Alabama versus New Mexico State.

Jacksonville (2-13) was the laughing stock of the NFL under former head coach Urban Meyer, who lasted 13 games in northern Florida. The Jags are dead-last in point differential, 31st in team total DVOA, and would currently pick number one overall for the second consecutive season.

Rookie quarterback Trevor Lawrence is, as Belichick called him, “a really good prospect.”

Belichick views Lawrence as a prospect rather than a starting NFL quarterback because that’s how disastrous the situation is in Jacksonville. Before you say don’t take an opponent lightly, no, Sunday’s game is not about game-planning the Jaguars.

On Sunday, New England needs to focus inward and get back to playing winning football. The Patriots need to make a statement that they’re the football team that won seven consecutive games this season and not the one that lost the last two weeks.

Here’s a five-step plan for the Patriots to get back to their winning formula:

1. Get Back to Dominating in the Intermediate Passing Game

The phase for the Patriots that needs to find more consistency is the passing game; if the Pats don’t rediscover their success through the air, they won’t go very far.

The area of the field where New England’s personnel, from quarterback to pass-catchers, finds the most productivity is at the intermediate level, where they find the majority of their explosive plays. 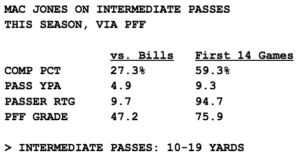 In the loss to the Bills, Jones was 3-of-11 for 54 yards with an interception throwing passes with medium depth (10-19 yards), as Buffalo exposed some flaws in the Patriots’ personnel.

The Bills knew the Pats would try to throw in-breaking routes (crossers/digs) and played with man coverage corners taking inside leverage on the Pats’ receivers to cut off the middle of the field.

Although Jones’ issues throwing deep compounded this strategy, New England’s receivers were more to blame for forcing Mac to throw into leverage.

The Patriots’ double dig concept against cover-one man in this play. First, Jakobi Meyers’ release doesn’t move Taron Johnson off his inside hip. Eventually, that forces Meyers to break through Johnson’s leverage rather than away from the Bills corners’ body-positioning. Then, notice the lack of route spacing for the Pats receivers. Meyers and Bourne (outside dig) end up nearly on top of each other, while N’Keal Harry’s vertical route doesn’t put the post-safety in a bind. The result is Mac throwing into Johnson’s leverage to Meyers, a pass that never stood a chance.

The Bills deserve credit for taking away the middle of the field, but the spacing and route releases weren’t threatening the Bills’ corners.

Here’s an example from earlier this season of the same route combination against inside leveraged corners out of single-high. This time, Meyers (right slot) moves the defender off his spot to open an inside release. Then, the spacing between Meyers and Hunter Henry’s dig routes is significantly better than the example above, allowing Mac to throw into single coverage away from the robber/help defender.

STRUGGLES WITH PLAY-ACTION VS. BILLS

Another area where the Pats struggled that usually produces big plays between the numbers were off play-action, where Jones was 4-of-11 for 42 yards and an interception.

Some of those struggles were on the Bills defense keying on play-action concepts (like Mac’s INT). But some of it was also on decision-making by the Pats’ rookie quarterback.

In this play, Jones passes up an open Meyers on the crossing pattern and opts to throw into coverage on the deep post to Harry, which was Mac’s only turnover-worthy play of the game.

New England needs to access the intermediate area to be a productive passing offense even though defenses know that’s where they’ll attack.

Last week, the Pats receivers were easy to cover in man coverage because they were running routes on top of each other and weren’t threatening leverage to give Mac makeable throws.

If they want to get their passing game going against man coverage, the receivers need to step their game up this week.

2. Keep Running the Football at a High Rate

As much as we all want to see Mac cook, the Patriots’ strength offensively is their running game, and it’s also their most consistent avenue to stay ahead of the chains (and out of third-and-long).

New England added 0.30 expected points, and running back Damien Harris gained 5.7 yards per rush in the loss to the Bills, but the scoreboard caused the Pats to lean on the passing game.

Jacksonville’s defense struggled to stop the Jets’ rushing attack last week, which is very zone-heavy conceptually, but they also gave up a 38-yard run to Michael Carter on a fullback lead play. In all, Carter and teammate Tevin Coleman averaged 5.8 yards per rush.

Although the analytics nerd in me cringes at an offense leaning on their running game in 2021, the Pats offense is built to run the ball, and they can use that to protect their passing game.

Turning over to the defense, we discussed the Patriots’ adjustment to more zone coverages throughout the seven-game winning streak.

In a way, it feels like the coaching staff thought they put too much zone on tape and shifted back to man coverage to do something different.

Over the last three games, New England played man coverage on 51% of the coverage snaps. They were in man on only 33% of their snaps during the first six games of their winning streak. Plus, statistically, they were the best zone coverage defense in the NFL during their seven-game winning streak: 5.7 pass yards per attempt (best), -0.34 EPA per play (best), and two touchdowns to seven interceptions.

Too much exposure in man coverage for lesser coverage talent led to their demise against Buffalo, and it doesn’t play to their strengths.

This year’s defense was at its best when they spun the dial and confused quarterbacks out of different zone structures.

For example, the Pats play a three-buzz coverage here where Adrian Phillips rotates from a two-high shell into a middle hook zone to form a single-high structure. New England covers all Justin Herbert’s downfield options, forcing him to run for the sticks on third-and-long. With eyes on the quarterback in zone, he’s stopped well short of the line to gain.

New England shows cover-one robber before the snap then rotates into cover-five cougar, which is a cover-two trap coverage with the idea of baiting the quarterback to throw into the flat. The post-snap spin confuses Baker Mayfield into throwing to the covered flat, and Kyle Dugger is there for the interception.

New England’s defense is at its best when they’re disguising coverage and hiding defenders who aren’t as skilled in man coverage as years past.

Patriots linebacker Dont’a Hightower admitted that the Bills, “did a good job of scheming us up and figuring out what we were in and taking advantage of the weak spots in that.”

The Pats no longer have the cover talent to consistently match up in man coverage, and they can’t afford to give good quarterbacks a clear picture of their coverage shells.

Although the in-structure plays hurt the Patriots the most, the ones that stung the most were the out-of-structure or broken plays that Allen made to extend drives.

The frustration for the Patriots was that they weren’t always playing with all 11 players on a string and often left voids in their coverages because Allen pulled them out with his legs.

On Stefon Diggs’ pivotal third-down conversion, J.C. Jackson busts the coverage. Jackson drops into the deep third as if it’s a cover-three zone, but the rest of the defense plays man. As a result, Diggs is wide-open underneath the coverage since Myles Bryant carries the slot vertically.

The Patriots won’t play very many quarterbacks as physically talented as Allen, but they allowed the Bills’ quarterback to turn the game into playground football far too often.

Bill Belichick’s defense looked like 11 players, all with different agendas at times, and that’ll get you beat when you play against a quarterback with Allen’s physical tools.

5. Be Physical with Press and Re-Routing in Man Coverage

One last disappointing element to Sunday’s loss against Buffalo was the lack of physicality with the Bills’ receivers in the five-yard contact window.

The Patriots didn’t want to play press-man against McKenzie or Stefon Diggs, which is fine, but the free defenders and coverage players closer to the line of scrimmage were way too passive.

Looking up some old clips on how the #Patriots defense successfully handled crossing routes in the past. There wasn't nearly enough of this on that Buffalo tape. Can't give the crosser free air space over the middle. pic.twitter.com/Us4XasJQJ0

Once upon a time, the Pats defense would punish receivers for going over the middle and jam tight ends releasing into the pattern with their edge rushers.

For example, Matthew Judon landed two jams on Dawson Knox on the play above from their Week 13 matchup to throw off the timing of Knox’s route.

Last week, Judon let Knox get a free release off the line, and it left Adrian Phillips out-leveraged in a foot race on a shallow crosser.

When the Patriots play man coverage, they need to help out their coverage defenders by disrupting the releases and timing of their routes with re-directs near the line of scrimmage.

Otherwise, it puts them in disadvantageous foot races against receivers moving at full speed.