Bill Belichick and Sean McDermott will meet for the ninth time on Monday night. 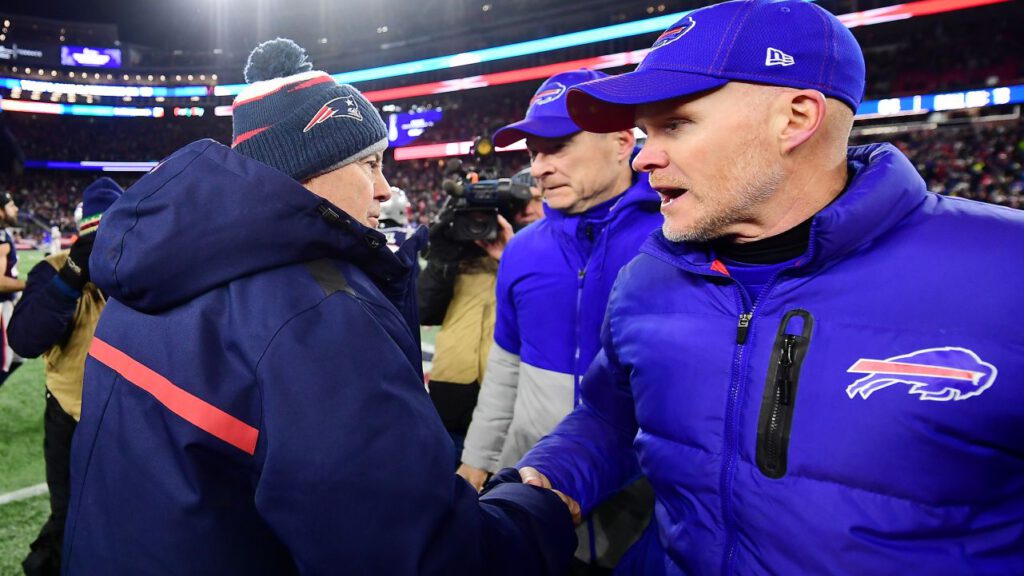 Division games are often a challenge of two familiar teams trying to win without their fastballs.

When the Patriots and Bills kickoff at Highmark Stadium in Orchard Park on Monday night, it will be the ninth time that Bill Belichick and Buffalo head coach Sean McDermott will meet.

Belichick knows McDermott runs a zone and disguise-heavy scheme out of a 4-2 nickel package on defense, and offensive coordinator Brian Daboll runs a pass-happy spread offense.

On the Bills’ side, McDermott knows that Belichick wants to run the ball to take the pressure off of rookie quarterback Mac Jones and force Josh Allen to beat the Pats without explosive plays.

The winner of Monday night’s showdown will be in the drivers’ seat in the AFC East, and the deciding factor will be which team can play left-handed most effectively.

Starting with the Pats defense against the Bills’ explosive passing offense, Buffalo under Daboll is the most aggressive early-down passing team in the NFL by an extremely wide margin.

Furthermore, Daboll runs his system mostly out of 11-personnel with three wide receivers on the field, with Allen having the eighth-most drop-backs out of “11” this season.

After ranking fourth in explosive passes in 2020, defenses are limiting the Bills to 16th in pass DVOA this season by playing two-high safety shells. As the chart above shows, Allen isn’t as effective against two-high looks as they force him to stay patient and make shorter throws.

Buffalo keeps defenses honest with quick-game concepts, but Allen wants to create big plays in the passing game. The two-high shells allow the safeties to stay over the top of vertical routes and leverage deep crossers.

The downside to playing two-high is that the defense is a defender short in the box against the run, but the damage is negligible with the Bills’ reluctance to run the ball and limited effectiveness on the ground.

Believe it or not, the Jacksonville Jaguars began laying down the blueprint on how to defend the Bills offense when they held Buffalo to six points in their Week 9 upset.

Here, the Jags fall into cover-two with a safety dropping at the snap. With Buffalo running skinny posts in a three verticals concept, it forces Allen to make an anticipatory throw to Emmanuel Sanders by leading him into the open void between the zone-droppers, and it’s an errant pass.

In this play, the Jags play a Tampa-two structure where the middle zone carries number three vertical, and the defensive line runs a stunt to pressure Allen. Although he has a chance to hit the corner route at the top of the screen, the pressure forces Allen away from the read.

With the Jaguars starting the trend, Colts defensive coordinator Matt Eberflus copied them in a 41-15 victory over Buffalo in Week 11 where Allen had a season-high four turnover-worthy plays and season-low 43.1 overall grade.

Buffalo runs a boot-action concept from the gun with Sanders on the crosser and Diggs on a corner route. Indy falls into cover-two at the snap, roboting the linebacker level underneath Sanders’ route and having the deep safety leverage Diggs’ flag pattern. Allen has nowhere to go with the ball and throws an interceptable pass under pressure.

This time, Allen tries to play a cat-and-mouse game with the squatting corner at the bottom of the screen to open up the vertical route. But the corner wins the battle and nearly picks him off.

However, the Patriots’ plan rides on the status of hybrid safety Kyle Dugger, who is on the COVID-19/reserve list after a positive test.

One would expect Belichick to borrow from Jacksonville and Indy while harkening back to that game plan against the Chargers (nearly 80% zone) to make Allen a dink-and-dunk thrower.

Herbert also faced dime personnel from the Patriots defense on 25 of his 35 drop-backs, averaging 5.6 yards per attempt and -0.37 expected points added against six defensive backs.

The best package for the Patriots to deploy would be three-safety (big) nickel or dime personnel. Belichick would have flexibility and athleticism in the back seven to play zone coverage while Dugger gives them another hitter in the box to defend the run out of two-high shells.

If Dugger doesn’t produce two negative tests to clear protocol by Monday night, it’ll likely force the Pats into traditional three-cornerback nickel or potentially put Joejuan Williams or Shaun Wade in the plan as a sixth DB. Another possibility is linebacker Jamie Collins returning as an athletic second-level defender.

In their opening touchdown drive against the Saints, Buffalo ran the football (seven attempts, 35 yards) with multiple designed quarterback runs and Allen took a profit in the short passing game, so it’s in Buffalo’s bag.

If they try to beat the Patriots with a downfield passing game, it’ll play right into Belichick’s plan.

Like the Pats forcing Buffalo to beat them with their perceived weaknesses, McDermott and the Bills are likely preparing to put the game in Mac Jones’ hands.

Jones stepped up for 310 passing yards and two touchdowns when the Titans loaded up against the run, but the Bills’ defense has shown vulnerabilities against the run this season.

Plus, the current weather forecast in Buffalo calls for a wintery mix with wind and freezing rain. The Patriots’ advantage on both sides of the ball in this game is in the trenches. They’re the more physical team that’s better suited to run the football in inclement weather; now is the time to impose their will.

New England will likely test Buffalo’s run defense by trying to replicate the success that Tennessee (146 yards) and Indianapolis (264 yards) had on the ground.

McDermott is notorious for running a 4-2 nickel over front with athletic linebackers Tremaine Edmunds and Matt Milano off the ball behind a D-Line shaded to the strong side (towards the tight end).

Against an aggressive front, the Colts exposed Buffalo’s tendencies with wham schemes aiming their backs at one-gapping three-technique Ed Oliver. Oliver shoots the gap right into the “wham” block, allowing the center to climb up to Milano and spring Jonathan Taylor.

In the past, the Patriots have also used a fullback lead play to run at the uncovered bubbles on the line of scrimmage.

If you can turn out the shaded nose tackle and kick out the play-side end, the fullback can lead to the linebacker in the B-Gap bubble leading to easy yards on the ground.

From there, Colts quarterback Carson Wentz found success with play-action by averaging nine yards per attempt with a touchdown on eight play-action attempts (Mac will attempt way more play-action passes).

Although that’s the ideal game script for the Patriots, Belichick said it best about the running game last week, “the running game is great if it’s effective. Everybody likes to call running plays, but if you’re gaining a yard, two yards, how many can you call? You can’t just be 2nd-and-10, 2nd-and-9, 3rd-and-8 all day.”

More than likely, McDermott will use sure-tackling safeties and nickel corner Taron Johnson aggressively against the run to even the numbers in the box, which could shut down the Pats on the ground.

If that’s the case, expect McDaniels to go into his bag of zone-beaters.

For example, the Pats flooded Tennessee’s zones by forming three-receiver sides with motion, and Mac manipulates the zone post-snap to hit a wide-open Jakobi Meyers on the sail concept.

On Kendrick Bourne’s 41-yard score, McDaniels floods the short zone in cover-two by releasing Hunter Henry on a vertical stem while Bourne runs a shallow cross into the vacated area.

The Saints created some downfield opportunities by flooding downfield zones even with a limited offense. With a healthy Tre’Davious White, Buffalo played more “three mable” zones where the backside corner plays man coverage against the X receiver (see above).

Once White left the game, they went to a more traditional spot-drop zone, and Sean Payton cleared out the boundary defender to make room for crossing patterns.

Without White, there will be matchups to exploit in the backend against corners Levi Wallace and Dane Jackson if the Patriots’ offensive line can hold up against Buffalo’s pass rush.

Hyde and Poyer are arguably the best safety tandem in the league and are interchangeable in the Bills’ secondary. Their versatility makes it difficult to decipher the coverage pre-snap because they’ll rotate and exchange responsibilities on the fly. Plus, both safeties are effective blitzers who will sneak up on quarterbacks. Quarterbacks read defenses back to front every week, but finding Hyde and Poyer is critical for Mac in this one.

Although Oliver’s aggressiveness can be exposed in the running game, he’s a terrific interior pass-rusher from the three-technique spot. Oliver is an explosive player who fires off the ball quickly and has good flexibility to rush almost like a defensive end. Every week, we repeat interior pressure in the ultimate nemesis of pocket quarterbacks. Block Oliver, block the blitzers from the back seven and keep Mac clean.

It’s a zone-heavy game plan for the Patriots defense, and all three Pats defenders listed will be deployed in short zones that will see a lot of Knox and Beasley. Although Diggs is the go-to guy, Allen will look to the middle of the field with the Pats high-lowing Buffalo’s #1 wideout in zone. Beasley, in particular, could have a huge game working an Edelman-style route tree by sitting down in zone voids and working between the numbers.

Throw the defensive line into this matchup as well because the Pats need to stop the run out of six and seven-man boxes this week. Although Buffalo’s rushing attack doesn’t scare you, the passing game does, and that’s where most of the resources will be defensively. New England’s defense needs to stop the run out of light boxes, or it’ll be a long day.