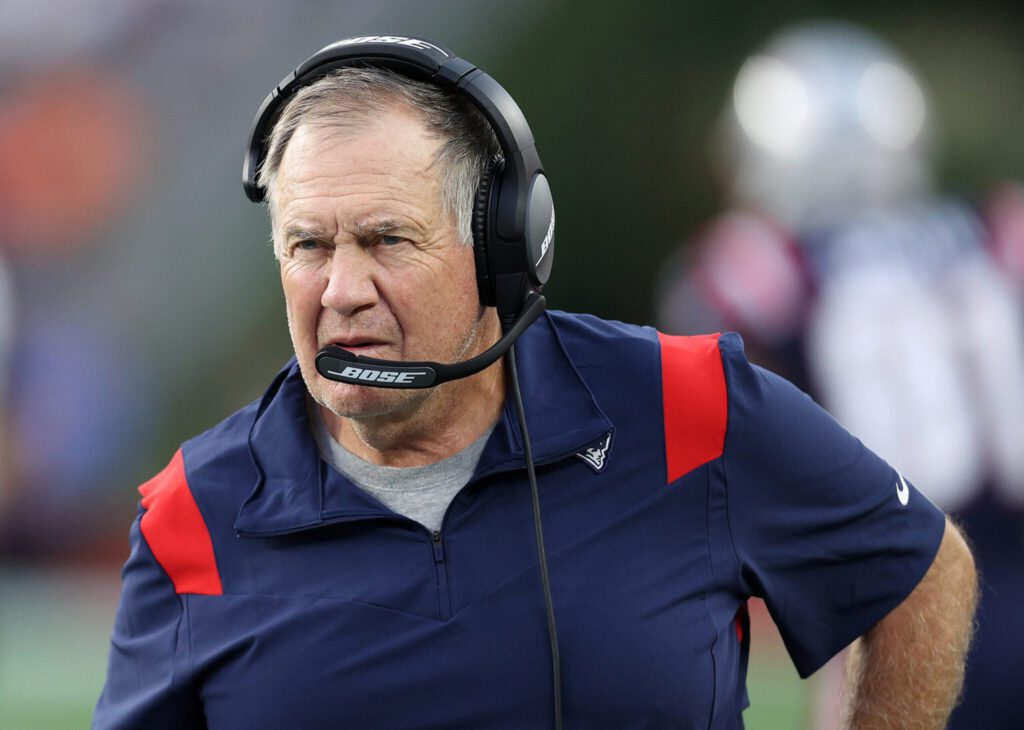 Patriots quarterback Mac Jones’s maiden voyage in the season-opener against the Miami Dolphins was a moral victory for the Pats’ rookie.

Although New England lost in Week 1, Jones’s pre-snap problem-solving, downfield accuracy, coverage manipulation, and toughness in the pocket were at a starter level right out of the gate.

Let’s cut to the chase: based on Bill Belichick’s remarks on Wednesday and the Jets-Panthers tape last Sunday, the Patriots are drooling over this matchup with New York in Week 2.

Nobody suggests taking Robert Saleh’s team, who plays hard for their new head coach, lightly. But the Pats’ coaching staff knows exactly how to game-plan against Saleh’s scheme.

If I can figure out what the Jets are doing on both sides of the ball and how to beat it relatively easily by watching Jets-Panthers, then this should be a cake-walk for Belichick and company.

Saleh, of course, was the defensive coordinator for the San Francisco 49ers over the last four seasons, and he brought Mike LaFleur with him to New York to run the offense.

“Same basic schemes on both sides of the ball,” Belichick said when asked to compare Saleh’s operation to the one New England faced last season in the San Francisco 49ers.

“All the characteristics schematically that we’ve seen from those teams that run the Seattle three-type of defense,” Belichick added.

On the one hand, the 49ers dominated the Pats in a 33-6 loss at Gillette Stadium in Week 7, 2020. But on the other hand, the Jets don’t have the experience or talent that San Fran does.

Starting with Mac Jones and the offense, offensive coordinator Josh McDaniels has faced the Seattle-three scheme a dozen times and typically fares well against zone-heavy defenses.

The Jets played zone coverage on 66% of their snaps in Week 1, rotating between cover-three as their base and two-high shells with a mix of cover-four and cover-two in their loss to Carolina.

There was some man coverage sprinkled in there, but this is a zone scheme at its core, so it’s time for McDaniels to dial up the zone beaters.

The Seattle-three system thrives on simplicity and execution. However, with that is a heavy onus on talent in the secondary, which the Jets are still building at this point.

Let’s start with the basic principles of Saleh’s cover three and then get into how McDaniels will give Mac answers to beat zone coverages. 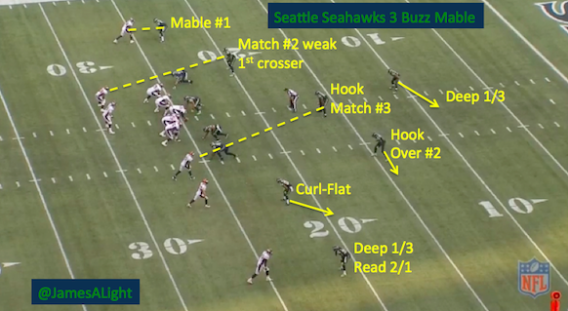 Here is a diagram that shows the Jets’ coverage rules in a Seattle Cover-3 buzz mable. The word “buzz” refers to the coverage rotation, which allows the strong safety to disguise in a two-high position then rotate into a middle hook zone. The other key component is on the backside. The weak side linebacker is responsible for matching a vertical route out of the number three spot in the slot, where offenses usually expose this coverage scheme.

Now, here’s an example of what McDaniels will do to expose this coverage on Sunday.

In this play, the Panthers are in a two-tight end set against a three-linebacker base defense. On the left side, Carolina runs its tight end on a deep over route off of play-action, forcing the weakside linebacker to match the vertical route, which Del’Shawn Phillips does well. However, pulling Phillips out of the underneath coverage creates space for Christian McCaffrey’s route out of the backfield.

The Pats running backs should have the same opportunities to flood the weak side zone in Sunday’s game, or they’ll get a shot play if one of the receivers (paging Nelson Agholor) beats Phillips in a foot race.

To mix things up, Seattle-style coverage systems will call the occasional two-high zone structure. Another classic coverage beater is getting the number two receiver out of the slot isolated against a cover-four deep safety playing 12 yards off the line of scrimmage.

Last week, the Panthers got speedster Robby Anderson a head of steam against a backpedaling deep safety, and Anderson blew by the coverage for a 57-yard touchdown.

One would think New England will try to get Nelson Agholor in similar foot races on Sunday.

Here, Carolina’s coaching staff does just that for quarterback Sam Darnold. To Darnold’s left is a HOSS combination, a hitch outside and a seam route inside, which plays well against cover three. On the right side is a smash concept, with McCaffrey on an underneath hitch paired with a backside corner route.

As we roll the play, the Jets fall into cover-two, so Darnold works the smash concept to his right. The shallow zones jump McCaffrey’s route, leaving a big play to D.J. Moore on the corner route. Carolina came back to this same play later, and Darnold just missed Moore for another big-gainer.

This week, the Patriots’ coaching staff should have all the answers to the test for an explosive passing performance on offense against the Jets.

WHEN THE JETS HAVE THE BALL

“He’s an explosive player. He’s got a great arm. Live arm. Makes all the throws. Athletic. Like any young player, you know, they gain experience and get better every time they go out there,” Belichick said of Wilson.

Belichick acknowledges that the number two overall pick in last year’s draft has tremendous arm talent, escapability and is a great on-the-move playmaker outside the pocket.

However, the Pats head coach didn’t praise Wilson for his downfield accuracy, decision-making, or ability to process coverage, and there’s a reason for that.

In his first regular-season start against Carolina, Wilson led two second-half touchdown drives to make it a game against the Panthers in a 19-14 loss.

During that comeback attempt, we saw Wilson’s arm talent and athleticism. Above, he gets outside the pocket to extend the play and finds Corey Davis for a touchdown. He steps up to avoid pressure in the second play and throws a 40-yard completion to Denzel Mims.

Based on his experiences at BYU, Wilson is also comfortable operating in under-center play-action schemes off of zone blocking, a staple of the Shanahan coaching tree.

There’s no doubt about it; if you let Wilson play his game by allowing him to extend plays (especially to his arm/right side) and throw the ball down the field, he can make you pay.

Wilson’s average depth of target was 10.6 yards against the Panthers, trailing only Russell Wilson in Week 1. The rookie loves the deep ball and struggled to throw the ball accurately in the loss to the Panthers, ranking 28th in completion percentage over expected (-11.1).

Belichick is 21-7 against rookie quarterbacks as the Patriots’ head coach because he has a knack for confusing young signal-callers with post-snap movement by his defense.

Last season, even a depleted New England defense shut down Offensive Rookie of the Year, Justin Herbert, in Herbert’s rookie campaign by spinning the dial on the young QB.

The Panthers did the same with Wilson, forcing him to hold the football and take six sacks with three turnover-worthy plays.

Here, Carolina shows an overload pressure in cover-zero to Wilson’s left. The Jets quarterback slides the protection left and thinks he has the answer to a blitz by throwing hot to his outside receiver on a quick slant. However, the Panthers drop both blitzers into zones underneath Wilson’s slant, taking away the hot route, and Wilson is sacked by the unblocked defender off the right side. Although it might be asking a lot out of a rookie, the slot receiver to the left side is open up the seam, but Wilson is locked onto the slant and doesn’t get off of it fast enough.

In this red-zone play, the Panthers defense gets Wilson to hold the ball by taking away his first read. Wilson’s pre-snap read is single-high, which is typically a good coverage to work this stick-nod route by Corey Davis in the number three spot. However, the Panthers bracket Davis and Wilson can’t get off of it fast enough to hit the underneath slant before the rush gets home.

Feel like I'm watching the same Zach Wilson as the guy who played at BYU. All three receivers to the trips side win on their routes, but he sticks on the backside vertical that is well covered. Dude just hates the layups. #Jets #Patriots pic.twitter.com/BJHtIbeqoo

One of the overarching themes of Wilson’s debut was also prevalent on his college tape; he has a propensity to force the home-run throw rather than taking what the defense gives him, especially if the defense shows him a one-on-one matchup pre-snap.

New York’s offensive line wasn’t good in pass protection either, but Wilson’s average time in the pocket on his six sacks was 3.87 seconds, meaning he’s holding the ball too long.

The Patriots’ defense can feast on Wilson’s deep-ball infatuation and slow-release by disguising coverages on the Jets’ rookie to get him to hold the football.

If they can make Wilson hesitate, as the Panthers did last week, it could be another sack party in the Meadowlands.

If there is one player on the Jets defense who could ruin the day, it’s Williams. He’s long, explosive, and a stout two-way player. He can hold things up in the run game and penetrate the line of scrimmage to free up rushers elsewhere. The Patriots’ strength along their offensive line is in the interior, but those guys will need to prevent Williams from blowing up the game plan.

The Jets only ran the ball 17 times in the opener, six of those carries were on outside zone, and only three of their runs went between the guards. New York wants to threaten off-tackle, which means setting the edge will be big. Judon’s role as an edge-setter is critical, both in the run game and pass game. The Pats’ edge rushers will also need to contain rush and prevent Wilson from escaping the pocket.

Another strength-on-strength matchup for Jackson, who draws Davis after going toe-to-toe with DeVante Parker last week. Davis has a similar skill set as Parker. A big-bodied outside receiver with good high-point skills and downfield route-running. Jackson needs his “A” game on Sunday. Davis can get deep on you and Wilson won’t be afraid to throw it.

As we mentioned above, New York’s coverage scheme sets up potential big-plays by attacking the weak side linebacker with vertical routes from inside receivers. Phillips was the WILL against Carolina, so one would assume he’ll be there again. Whether it’s Nelson Agholor on a deep over, the tight end’s off play-action, or Jakobi Meyers on an intermediate crosser, the Pats need to attack Phillips.

After facing first-round pick Jaylen Waddle last week, Jones gets another slot receiver in the Tyreek Hill mold with Moore. Moore is an undersized speedster who tests you on vertical routes and schemed touches. Waddle made a few key plays for Miami’s offense last week, so the Pats will need to be better on Moore this week. With Waddle going sixth overall to the Dolphins, Moore was considered the discount-Waddle in the draft as a top pick in the second round (34th overall).