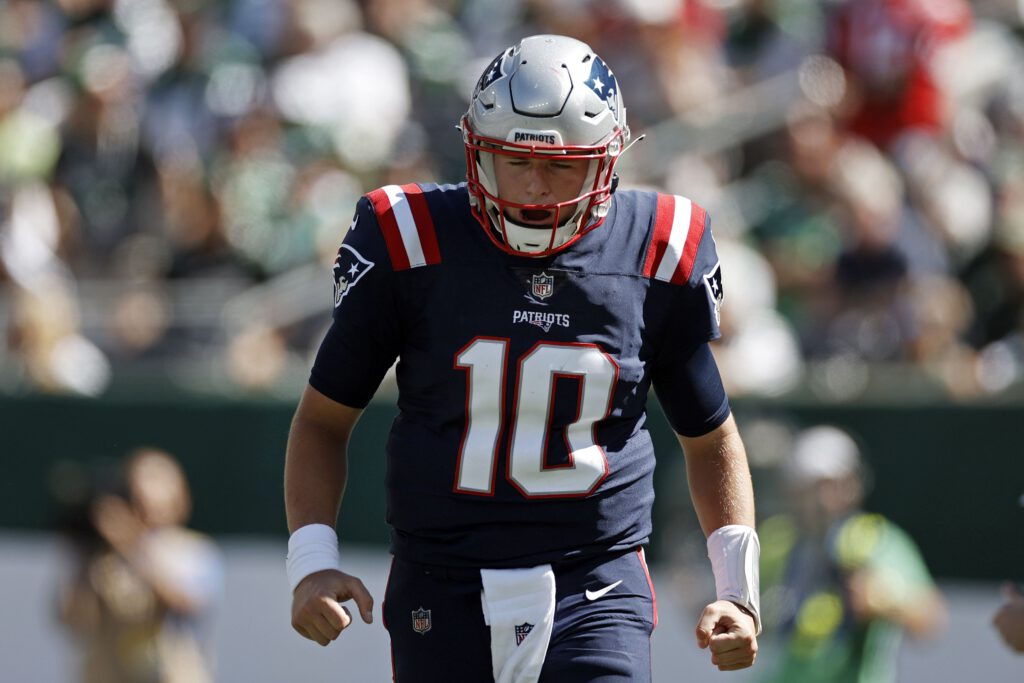 The Patriots’ defense needs a get-right game against the New York Jets on Sunday at Gillette Stadium. 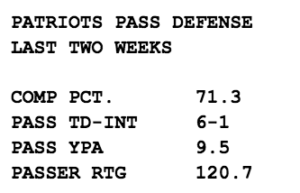 The Pats have a 33.9% pressure rate when they blitz (18th in NFL). Their pressure rate without blitzing is nearly identical to their blitz pressure percentage (33.7%). When you’re taking defenders out of coverage to send extra rushers but not getting home, that’s a recipe for disaster.

We saw that come to fruition at the worst time on the final play in overtime against the Cowboys last week, when New England dialed up a zero blitz that didn’t alter the throw for Dak Prescott (and left cornerback Jalen Mills out-leverage and on an island against CeeDee Lamb).

The Patriots’ problems with their pass defense aren’t just related to the pass rush, though, as the coverage in the secondary hasn’t been up to par either in recent weeks.

Then, Prescott followed that up by averaging 13.0 yards and 0.45 expected points per pass against the Patriots’ zone coverages. Above, the Pats try to disguise their zone structure by having safety Adrian Phillips follow the running back outside, leaving Phillips at outside corner. New England then falls into cover-three, with Phillips responsible for the deep third, a position he doesn’t play often, and he doesn’t get enough depth in his drop to cover Lamb on the broken play.

The good news for Bill Belichick’s defense is that they have the perfect opponent up next in rookie quarterback Zach Wilson and the New York Jets.

Yes, we said something similar about Mills and the Texans. But there is a key difference between Wilson’s playing style and Mills’s that favors New England even more.

Houston’s rookie is a good in-structure passer when he gets hot, meaning he functions well from the pocket on rhythm-based throws created by the system the Texans run offensively.

Wilson, on the other hand, thrives out of structure on improvisation plays. The Jets’ first-rounder has excellent arm talent, and he’s a dangerous downfield thrower on the move.

Wilson has shown more patience in New York’s last two games, but he’s still hunting for big plays. In Week 4, Wilson upset the Titans in overtime with four big-time throws in the second half, three of which came out of structure with Wilson on the move.

“The Tennessee game was decided by that [Wilson throwing on the move],” Patriots captain Devin McCourty told CLNS Media this week. “He [Wilson] rolls and finds Corey Davis. Rolls and finds Keenan Cole. It was really a lot of extended plays and a pass interference. You don’t see a guy get outside the numbers on one side of the field and throw it ten yards out of bounds on the other side of the field [on a throwaway]. That’s not a normal thing to do.”

Wilson has the second-lowest completion percentage over expected and the second-highest turnover-worthy play rate. The Pats didn’t need to do anything exotic against Wilson the first time around to intercept him four times in the first 35 minutes in Week 2.

But they played tight coverage downfield, forcing Wilson to throw into NFL-sized windows and made him work from a muddied pocket to make him beat them with his weaknesses.

Since his first matchup with a Belichick defense, Wilson’s reads and decisions are improving. He’s taking what’s there more often. Still, he’s an inaccurate quarterback that struggles to consistently make good throws from the pocket inside the framework of the offense.

Although the Patriots’ pass defense is struggling, and Wilson is getting better, New England should control the game defensively as long as they don’t get beat on broken plays.

After reviewing the Patriots’ win over the Jets in Week 2, the stark difference in aggressiveness for rookie quarterback Mac Jones stood out.

In my film review of Jones that week, the overarching theme was that Mac left too many plays on the field because he wasn’t hanging in the pocket and pulling the trigger on downfield throws.

Here, Jones has an open Jakobi Meyers for about a ten-yard gain on a “spot” route to the quarterbacks’ right. Instead, he throws to a covered Jonnu Smith in the flat for a small gain.

In this play, the Jets’ blitz gets home, and Jones bails on his end-zone read to get rid of the ball into the flat. Hunter Henry has his man out-leveraged on the corner route, and Mac could anticipate that throw for six based on the defenses pre-snap alignment.

Last week, Jones was four-for-four on passes over 20 yards, aggressively anticipating downfield throws even with pressure in his face (10.5 yards per attempt under pressure in Week 6).

#Jets HC Robert Saleh or analytical wizard? At today’s presser he went DEEP on their studies of #NFL offenses + what the ‘kill zone’ is & the balance of explosives vs dink & dunk #Patriots attack: #NEvsNYJ #TakeFlight #ForeverNE pic.twitter.com/tSh7FzwHLP

This week, the Jets’ defensive mindset is to take away explosive plays to force offenses to beat them on short throws with heavy doses of zone coverage (Seattle-3/cover-4). However, the flip side of that is they’re 28th in DVOA against short passes (under 15 air yards).

New York’s strength as a defense is their defensive line, which is sixth in pressure rate this season. Putting all those factors together, expect another short, intermediate, and quick passing plan from offensive coordinator Josh McDaniels once again.

Looking at a few things that worked last time out, the Pats had success with second-read throws off play-action where in-breaking routes occupied the inside hook zones to open passing lanes.

Here, Hunter Henry’s crossing route off play-action draws the attention of the two inside zone defenders and opens an easy completion against a bailing outside corner to Kendrick Bourne.

The Patriots also successfully spread the Jets defense out in empty formations, then dialed up HOSS Z Juke to work the hitch-seam combination against cover-three and the juke series against cover-four.

Atlanta was also successful at attacking the underneath zones in the Jets’ coverages. Ideally, one would hope Mac Jones’s passing chart to look very similar to Matt Ryan’s in Week 5. Ryan completed over 73 percent of his passes and threw for 342 yards with an aDOT of 8.0 (in a 27-20 win).

The Falcons flooded New York’s short zones to put defenders in conflict. Here, the zone-dropping linebacker has to respect Cordarrelle Patterson’s underneath hitch, which opens the passing lane to tight end Kyle Pitts up the seam with the safeties playing deep in cover-4.

Falcons offensive play-caller Arthur Smith also flooded New York’s deep zones by releasing multiple vertical routes downfield. In this play, both tight ends release vertically up the right sideline, and the outside corner has to carry Pitts’s route until he breaks on the post, which makes him late to cover the fade by Hayden Hurst.

Atlanta torched the Jets’ defense by throwing passes out of two-tight end sets, with Ryan averaging 9.1 yards and 0.16 expected points per pass play.

Offenses are finding the most success with shorter passes to tight ends and inside receivers against the Jets defense, which feeds directly into the strength of the Patriots’ offense.

Given the upward trajectory of New England’s passing attack in recent weeks, Mac Jones and the Pats offense should continue to build momentum against the Jets defense.

Franklin-Meyers is arguably the best player on the Jets’ roster, and who knows who will be at tackle for the Patriots this week. Franklin-Meyers has good length, too, which is giving the Pats’ smaller tackles like Isaiah Wynn issues this season. Jets head coach Robert Saleh moves Franklin-Meyers inside at times as well. But he’s the kind of pass-rusher who can take over a game if New England’s offensive line struggles again.

Although they’re not as hyped as teams’ with better records, the Jets’ offensive line has quietly turned things around this season, and the Pats need to improve their pass rush. According to PFF, the Jets are 14th in pass-blocking grade and eighth in run-blocking grade. Plus, their starting tackles Fant (left) and Moses (right) are grading out in the top-half among OTs. Rookie Alijah Vera-Tucker is having a strong first season in the NFL, while center Connor McGovern is solid. If there’s one area to expose, it’s at right guard, where Greg Van Roten is struggling. Uche had two sacks in Week 2 rushing on Van Roten. Expect to see that matchup again.

Jackson wasn’t exclusively on Davis in the first matchup, but the Pats’ CB dominated when he was on Davis (one target, INT). Based on what we saw, Jackson used a mirroring/trail technique rather than physical press-man and seemed to have a good feel for the types of routes Davis was running. Outside of his lackluster stat-line against the Pats, Davis is averaging 73.5 receiving yards per game and is Wilson’s go-target on big plays. Wilson can’t possibly play worse than in Week 2, so this might be more of a back-and-forth between Jackson and Davis.

The Patriots didn’t see Jamison Crowder the last time they faced the Jets, but he’s healthy now. Crowder is a legit chain-mover out of the slot, who gets open quickly in his breaks to make life easier on his quarterback. If Jon Jones can’t go, the Pats will likely rely on backup slot CB Myles Bryant against a pro in Crowder. I would expect Jets OC Mike LaFleur to test Bryant.

New York plays zone coverage on 70% of their defensive snaps, so narrowing it down to one coverage player here isn’t it. This should be the week that Henry and Smith both have featured roles in the passing game, and we finally see the duo take off. Henry is on a nice run of late, but Smith continues to be a disappointment, mainly because he’s only running routes on 30.5% of the Pats’ passing plays. We saw what Atlanta did out of 12 personnel. It’s time.