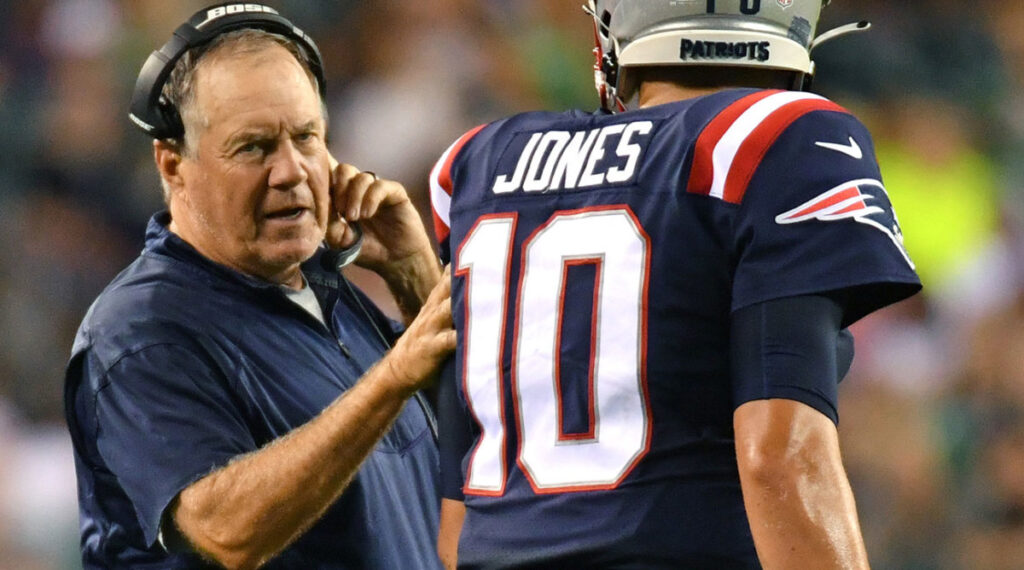 “They do a good job of matching routes,” Patriots head coach Bill Belichick told CLNS Media this week. “As the pattern develops, they just pounce on it. It really plays like man-to-man, but it’s not man-to-man, but it turns out to be man-to-man. Those are challenging for the receivers and the quarterback because the match zones are tough. If teams can do a good job matching zones, like the Chargers do, then that puts a lot of pressure on the offense.”

“We’re going to have to make some good post-snap decisions on a lot of things, whether it’s movement, rotations, how the coverage plays out,” Belichick concluded.

Jones should know a thing or two about match zones because his college and NFL head coaches were pioneers of the rip/liz match system.

“This started with the Cleveland Browns. I was the defensive coordinator in the early 90s, and Pittsburgh would run four streaks. Then they would run two streaks and two outs from 2×2,” Saban said. “So we got to where we could not play three-deep zone because we rerouted the seams and played zone and what I call ‘country cover-3′ (or spot drop). Well, when Marino is throwing it, that old break on the ball shit doesn’t work.”

“I came from primarily a zone system at the Giants. Nick came from, I’d say, a man and a blitz system in Houston with coach [Jerry] Glanville. And then, a lot of the zone principles from Coach [George] Perles at Michigan State,” Belichick told CLNS Media back in 2018.

“We merged a lot of those things together, and Nick, obviously, handled it at Cleveland.”

In simplest terms, match zones use a call to cover the slot (#2) receiver based on their route stem. If the slot goes vertical or two in the seam, the coverage essentially becomes cover-1, with the slot defender matching the vertical route like its man coverage. If the slot breaks on an underneath route, the defense will make an “under” call, and it becomes cover-three. 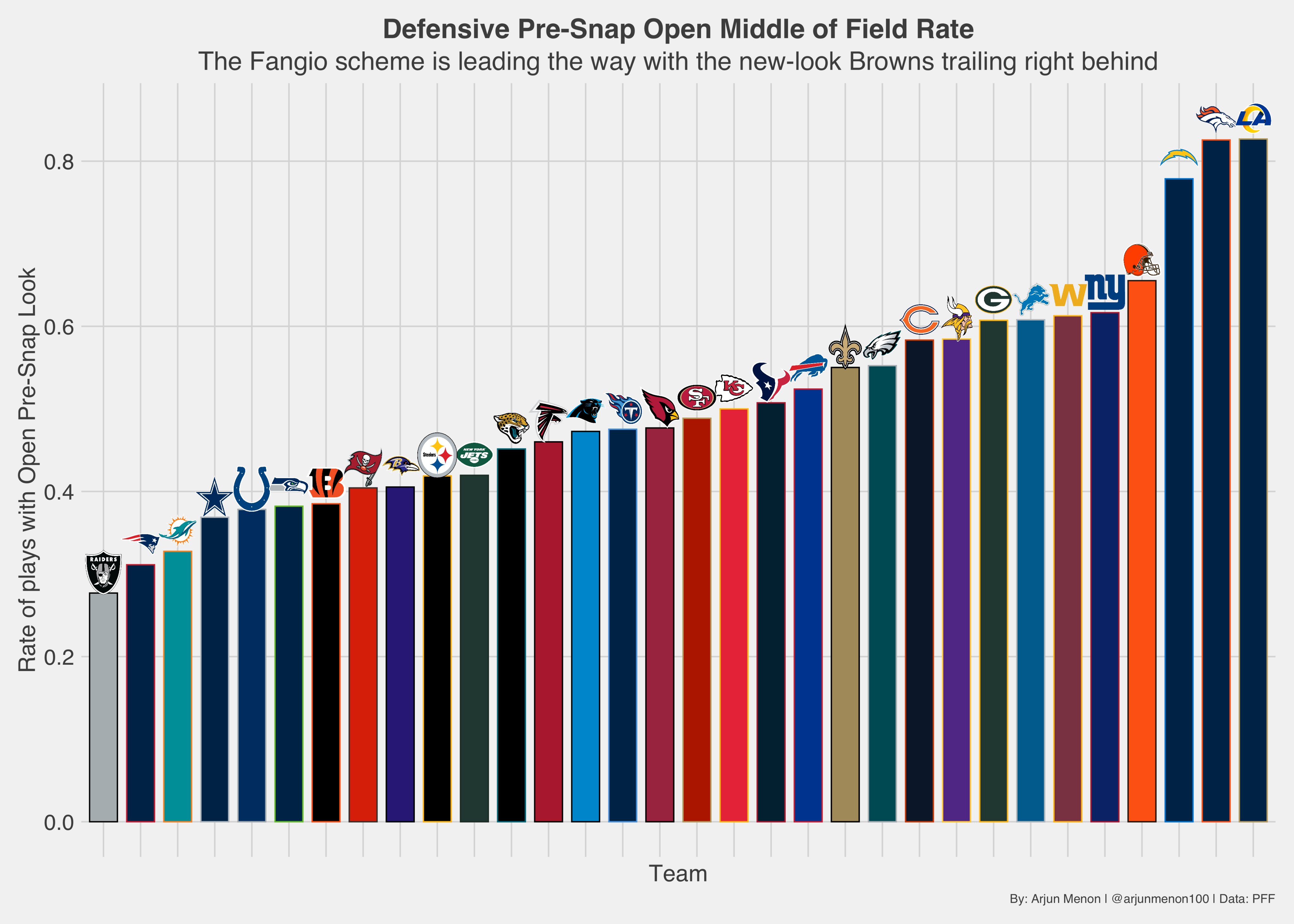 Staley’s secondary aligns in a two-high safety shell before the snap more than any defense in the NFL, but it typically rotates into a single-high coverage after the ball is snapped.

Like Saban’s rip/liz, Staley’s defense is predominantly a cover-one or cover-three (48.4%), while they’ll sprinkle in quarters coverage to keep the offense off-balance (17.1%).

“There’s a lot of stuff that there’s crossover, but this defense that we’re about to play is very multiple,” Patriots quarterback Mac Jones told me. “That just goes back to trust, and we have to talk this week especially and just make sure we’re on the same page. The receivers just have to be decisive and stick to what they’ve been taught.”

Although Jones sees plenty of match zones in practice and is coached up on it from two of the best at it, getting into a drop-back passing game against the Chargers is tough (they’re fifth in DVOA against the pass).

As Belichick said, Los Angeles is very sound and stresses the offense post-snap in their match zones. However, their two-high alignment pre-snap leaves them vulnerable against the run and LA is designed to take away big plays in the passing game.

Luckily, the Pats can live without explosive passing plays by playing out of their heavy packages, running the football, and attacking the short and intermediate areas of the field.

Patriots offensive coordinator Josh McDaniels will likely start by exposing the Chargers’ 32nd-ranked run defense in Football Outsiders’ DVOA metric. Due to their stylistic tendency to play out of two-high safety shells, Los Angeles presents the offense with lighter boxes in the run game.

Los Angeles’s two-gapping front is allowing 5.7 yards per rush against pulling schemes (sixth-most). The idea is to fold the defensive front with gap schemes and deploy lead blockers up to the second level against light boxes. LA gets the extra hat in they as they spin, but it comes late.

Also, expect to see the Patriots challenge the post-snap safety rotation by running jet sweeps to the perimeter.

From there, the Pats can attack the Chargers’ coverage rules with typical single-high beaters off play-action and by opening space at the short and intermediate level. LA is the second-best pass defense on throws over 15 yards but is 21st in DVOA on passes under 15 yards.

Speaking to coaches that face systems predicated on disguise and match zones, dictating the terms to the defense, and stressing the optionality of the scheme is critical.

In the middle of the field, the match defenders are in high-stress situations against the pass and have run-fit responsibilities. There’s a lot on their plates, so make it feel like a lot.

Here, the Ravens align in a 2×1 set and send the slot receiver to Lamar’s right on a vertical route, knowing the deep safety will match it. That takes a defender out of the underneath zone structure, leaving just two short zone players, and tight end Mark Andrews finds the void (also notice the space in the right flat for an RB release).

In this play, Baltimore runs a Pats favorite, the post-dig concept off play-action, and they create an opening with the post-safety staying deep for the dig route at the sticks.

Cleveland found a big play on a tight end screen that looked almost identical to the one the Pats ran last week to Jonnu Smith. The Browns use a two-tight end nub set and run play-action with one tight end taking the boundary corner out of the flat on the crosser. Then, they throw the screen to the nub side for a huge play.

Run-pass options also stress match zones, which the Pats showed on tape against the Jets last week and are a Mac Jones favorite. Those match players need to respect the run and read out the route combination to spin correctly after the snap.

Another call would be mesh-sit with a wheel route out of the backfield. The Chargers will play spot-drop zone against mesh, and the mesh crossers should expand the underneath coverage to create a chance for the “sit” route. Now, if the flat defender on the boundary cuts off the underneath crosser, you can flood the deep third with the wheel.

For our money, the chess match between McDaniels and Staley is arguably the best coaching matchup we’ll get this season, and it’ll test Jones’s mettle as a post-snap processor.

There are ways to beat Staley’s scheme, especially against the run and on short throws. But it’s going to take a cohesive offense to move the ball against the Chargers’ defense on Sunday.

WHEN THE CHARGERS HAVE THE BALL

Although the chess match when the Patriots have the ball is more interesting, Belichick versus Chargers second-year star Justin Herbert is also pretty juicy.

Belichick got the better of Herbert during his rookie season by doing what Staley will try to do against Mac: disguise and stress Herbert with post-snap decisions.

The Patriots used their cover-seven call several times to cut/bracket LA’s top receivers with their deep safeties and force Herbert to hold the ball in the pocket, which worked well.

New England’s post-snap rotations also caused issues for Herbert by taking away his first read with safeties rotating into underneath coverage, forcing him to hold the ball and check it down.

However, it’s more than fair to give Herbert credit for developing as a processor, which might make him more effective this time around against Belichick’s coverage tricks.

Looking at the tape against Baltimore, the Ravens defense held the Chargers to six points by exploiting LA’s offensive line in pass protection with their blitz package.

Here’s one blitz we might see from the Patriots where the Ravens add a safety into the rush and drop a linebacker off the line to replace him in the coverage, leading to an unblocked rusher.

Another Pats-like blitz scheme Baltimore uses is a simulated pressure where they’ll put six defenders on the line and drop two off into coverage, making a four-man rush. The Ravens overload the right side here and get a free runner at the QB off the right edge.

Like the Patriots last season, Baltimore limited the Charger offense by forcing Herbert into a two-of-eight day while under pressure with two sacks.

The Pats went with a coverage-heavy plan where they pressured Herbert on 34% of his drop-backs and hit the Chargers’ QB 11 times by forcing him to hold the ball. The Ravens, on the other hand, did it more by blitzing.

Either way, Los Angeles ranks fifth in pass frequency and calls a very aggressive game on fourth down — pressuring Herbert is critical.

Bosa had four quarterback pressures with a hit and three hurries last season, but the Pats typically have a good plan against him. If the passing offense has any chance of succeeding, they’ll need to block Bosa, and he’ll mostly line up over the right side. His go-to move is a swipe-rip that both Bosa’s use as their base as two of the best edge rushers in the NFL. Bosa is a massive test for Onwenu, who is back at right tackle.

Allen is a tough matchup to game plan for if you’re Belichick. J.C. Jackson is New England’s best corner, but he’s had some issues with receivers that travel into the slot and mainly run in-breaking routes. With Allen playing inside a bunch, this could be Mills with help on Allen and Jackson 1-on-1 with Mike Williams. The Pats can use a safety or linebackers to bracket Allen when he’s in the slot, making it easier for Mills.

Ekeler is a mismatch against any of the Pats’ linebackers as a receiver and will move around the formation in passing situations. My guess is we’ll see Phillips get Ekeler in man coverage while Kyle Dugger takes tight end, Jared Cook. New England can’t give Ekeler too many chances against their linebackers in space. Devin McCourty could also take Ekeler some to free up Phillips to do other things. The Pats will play with extra DBs on the field, maybe even in dime (six DBs).