The Patriots and Bills will play in much different conditions this time around. 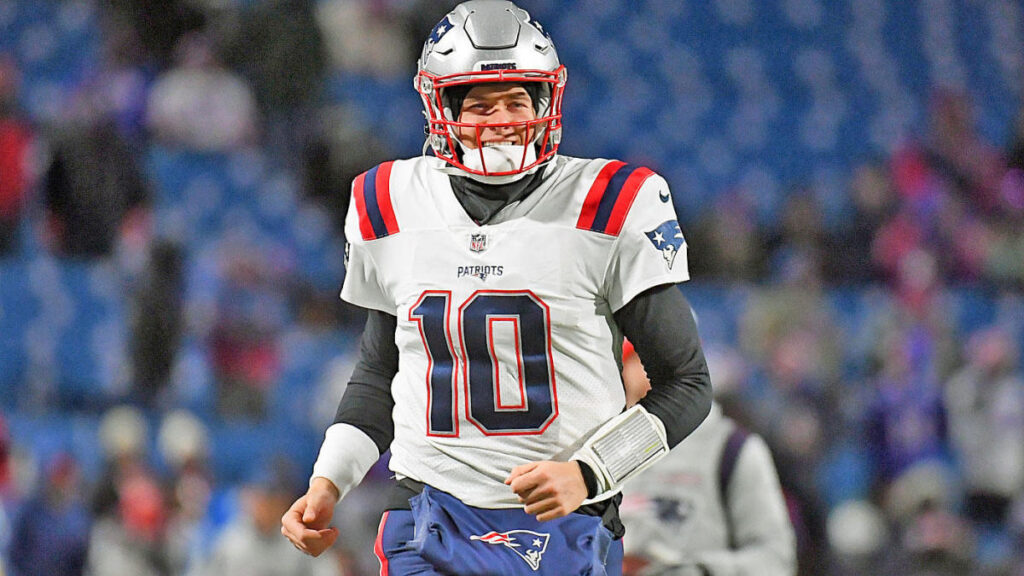 The Patriots and Bills are approaching Sunday’s pivotal AFC East showdown like it’s the first time they’ve played each other this season.

After a windstorm altered both teams’ strategy, the second matchup with a mostly clear weather forecast figures to take on a different form.

For New England’s offense and rookie quarterback Mac Jones, that means they’ll need to throw the ball more than three times to more or less clinch an AFC East title.

Although it might be tempting to keep running the ball down Buffalo’s throats, holding Josh Allen and the Bills offense to ten points again is a tall task. At some point, Jones will need to make some throws.

Luckily, as was the case last week, Tom Brady’s Bucs took on the Bills and gave his old team a passing game blueprint in Week 14. In Indianapolis, the Pats went to some of the same passing concepts that Brady had success with back in November against the Colts.

Buffalo can’t stop New England on the ground without an extra defender in the box, so one would expect plenty of single-high coverages.

The #Bucs ran a buck sweep scheme on Fournette's 47-yard TD. Kind of similar to the #Patriots' G lead play against Buffalo. #Bills couldn't stop it this time either. pic.twitter.com/U3pzLhDXX4

Fournette averaged 5.9 yards per rush and broke off a 47-yard touchdown on a buck sweep, taking advantage of Buffalo’s struggles against blocking schemes with pullers. Remember, the Pats ran crack toss (Harris TD) and G Lead in the second half to exploit those same weaknesses.

With Buffalo expecting those schemes again, Patriots offensive coordinator Josh McDaniels can go into his bag of single-high beaters that compliment the running schemes New England ran in Week 13.

McDaniels could use Buffalo overplaying crack tosses to run crack-boot action where they fake the toss on a play-action pass, as the Patriots did above on a 20-plus yard completion to Jonnu Smith against the Titans.

By throwing out of run formations, the Bills defense will need to respect New England’s rushing attack, leaving fewer resources in coverage while putting their linebackers in vulnerable coverage positions.

The Bucs successfully ran play-action from under-center to attack single-high coverages with similar concepts that Brady ran in New England.

Here, the Bucs paired a vertical clear-out route on the bottom of the screen with double in-cuts to Brady’s right against a cover-three zone. The vertical takes the defender on the outside deep-third out of the play, leaving a void of space for Chris Godwin to fill in with the crosser.

The Pats run similar crossing-style patterns off play-action against both man and zone coverage when they get single-high, feasting on out-leveraged defensive backs.

Although the Bills’ linebackers are athletic players, they’re prone to overreact to eye candy like motion and play-action. With the last matchup in the back of their minds’, those schemes will likely work even better this week.

Moving on to the traditional drop-back passing game, on Tampa Bay’s game-winning touchdown in overtime, they continued their success with stretching the field horizontally by running a low mesh concept against man coverage.

This time, the outside corners for the Bills aren’t on the same page. On Mike Evans at the bottom of the screen, cornerback Dane Jackson thinks he’s sticking with his man, but Levi Wallace switches on to Evans, leaving Breshad Perriman wide-open for the walk-off score. Although it looks like Tremaine Edmunds is at fault, Edmunds is a low-hole/robber defender and is there to provide help. In other words, he’s not solely responsible for switching on to Perriman.

Good stuff on this levels concept by the #Patriots:

The Bucs were also productive using the same levels concept we broke down for the Patriots last week.

Tampa Bay put Edmunds and Matt Milano in high-stress conflicts as middle hole (cover-two) or hook (cover-three) defenders. Brady read those linebackers in the middle of the coverage structure and threw to the open in cut depending on if they sat back underneath the deep dig or jumped the shallow dig.

When the Bucs wanted to stress the defense vertically, they used similar high-low concepts on the Bills linebackers. Above, Godwin’s shallow stick route influences Edmunds to jump him underneath, opening the passing lane for Evans to split the two-high safeties on the seam.

Most of the carryover concepts that the Patriots could borrow from the Bucs were designed to put Edmunds and Milano in conflict.

Although New England’s offense needs to keep leaning on its strength in the trenches, there are ways for Mac Jones to attack Buffalo’s pass defense if and when it’s necessary.

WHEN THE BILLS HAVE THE BALL

One of the surprises in the first matchup between the Pats and Bills was how often New England’s defense played man coverage in Week 13.

The Patriots were in man coverage on 14 of quarterback Josh Allen’s 30 pass attempts, holding Allen to four completions for 56 yards with five pass breakups and a 67.6 passer rating.

Although they held up well in man in Week 13, that was the highest man coverage rate for the Pats defense since they were picked apart in man by Davis Mills and the Texans in October.

Plus, our theory is that the Pats’ coaches wanted to challenge the Bills to throw the ball outside the numbers against tight man coverage in the windy conditions, and the strategy worked.

This time, we are expecting the Patriots to play more zone coverage and use a successful blueprint against Buffalo by playing split-safety zones.

Since the Jaguars laid the blueprint back in Week 9, Allen is averaging only 6.3 pass yards while subtracting 0.16 expected points on 38 pass attempts against cover-two structures.

The advantages to playing cover-two versus Buffalo are that the two-deep safeties protect against Allen’s deep ball, making the Bills’ quarterback play more of a dink-and-dunk style. Furthermore, it gives the defense five short zones underneath to handle run-pass options.

Starting with the traditional drop-back passing game, Allen struggles to process two-deep coverages and often won’t simply take a profit on open short throws, causing him to hold the ball. As a result, the Bills’ QB is under pressure on 46.3% of his drop-backs against cover-two.

Here, Buffalo ran a double-post concept that effectively pushes the coverage upfield, and Cole Beasley (to the right of Allen) is open for a quick completion underneath. Instead, Allen hesitates, allowing Carolina’s pass rush to get home and pressure him into a throw in the dirt.

Buffalo calls a smash concept at the top of the screen with an under route holding the short zones to open up a corner pattern in this play. Once again, Allen gets happy feet in the pocket and misses an open Beasley in the cover-two hole.

As Buffalo’s offense has evolved recently to how defenses are playing them, they’ve become more option-heavy and are now third in the NFL in run-pass options (96).

Allen is tied for second with 74 pass attempts off RPOs and trails only Jalen Hurts (80) for the league lead. The Bills’ go-to RPO concept is an RPO glance, where they pair the run action with a five-step slant that runs into the space vacated by the linebackers stepping up to play the run.

Playing cover-two against RPOs helps coverage players stay leveraged on those in-breakers and could allow more freedom for the middle of the field zones to stay in the passing lanes. 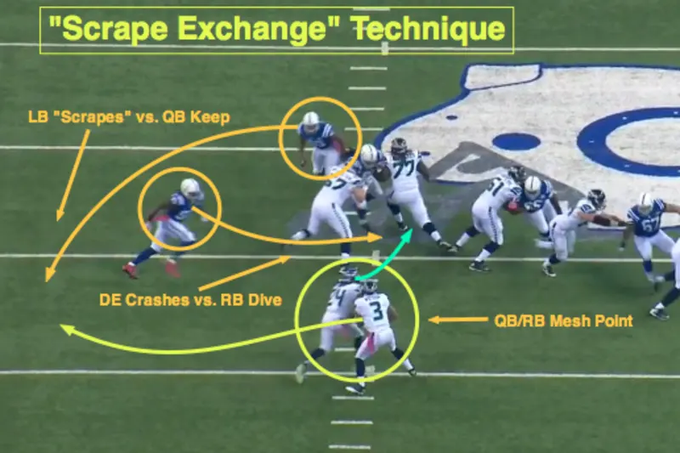 And with safety Kyle Dugger healthy the second time around, the Pats can use Dugger in the box to either play underneath in-breakers or contain Allen on read-option plays by scrape exchanging.

Like sticking with the running game as much as possible, the Pats will probably play man coverage when the situation calls for it, like on third down, for example.

But the book is out on how to slow down Buffalo’s offense. With New England’s advantage in the trenches, they won’t get exposed on the ground with fewer defenders in the box. There are mismatches up and down the line of scrimmage with the Pats’ front versus Buffalo’s O-Line (example: NT Davon Godchaux vs. center Mitch Morse).

Although anything is possible with Belichick, one would expect a zone-heavy plan that resembles how the Patriots shut down Justin Herbert and the Chargers in Week 8.

With starting left tackle Dion Dawkins on the COVID list, the Pats could have juicy matchups against two backup tackles, and Brown really struggled on the left side last week. However, containing Allen is as important as pressuring him. The Pats let him extend outside the pocket a few too many times in Week 13, so expect a heavier emphasis on rush lane integrity. New England should feel good about keeping Allen at bay if they make him beat them from the pocket, but they can’t let him survive on broken plays.

Jackson was excellent on Diggs in the last matchup, holding him to two catches for 32 yards on four targets. Although we could see them double number one (Diggs) with Jackson on Gabriel Davis at times, one would think it’ll be Jackson on Diggs when it’s winning time. It’s a marquee matchup between two 2021 Pro Bowlers.

We had this as one of our key matchups last time, but it bears repeating. Hyde and Poyer are the best safety tandem in football and what makes them so dangerous is that they are interchangeable. Their flexibility allows the Bills to disguise their defensive structure, and they can both play closer to the line of scrimmage as threats to blitz, run or pass. Mac needs to know where Hyde and Poyer are at all times.