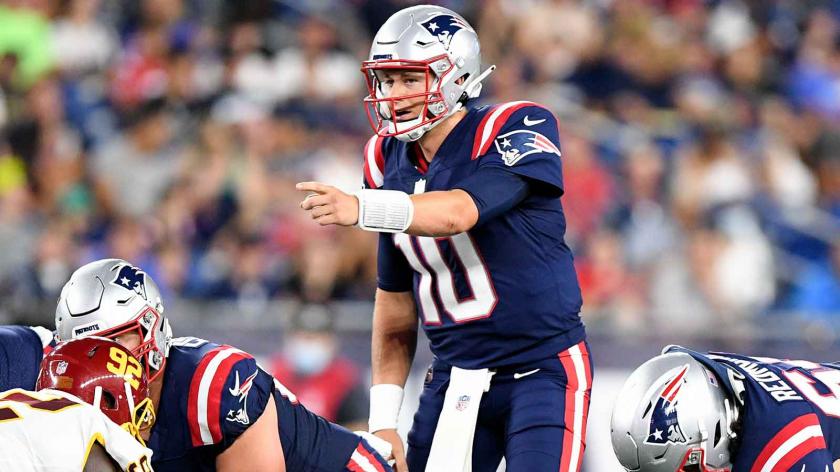 Making your first career start in the NFL is difficult regardless of position or opponent, but Patriots rookie quarterback Mac Jones is getting thrown into the deep end of the pool.

After beating out Cam Newton this summer, Jones will make his NFL regular-season debut against the Miami Dolphins in Sunday’s season opener at Gillette Stadium.

Although Jones will have the crowd on his side, an up-and-coming Dolphins defense led by former Pats play-caller Brian Flores is going to test a Bachelor’s degree quarterback at a graduate-level right out of the gate with heavy pressure, disguises, and physical man coverage.

“Since Coach [Brian] Flores has been down there [Miami], they [the Dolphins] have pressured quite a bit on defense,” Patriots head coach Bill Belichick said on Wednesday. “They have good corners, and they don’t mind pressuring the line of scrimmage and letting those guys do their thing. They’ve been pretty productive doing it, so I’m sure we’ll see both.”

The pressure that Belichick refers to often comes in the form of cover-zero blitzes, with the Dolphins leading the NFL by calling cover-zero on 13.3% of their defensive snaps in 2020.

Although Miami brings all-out pressure at a high rate, they’ll also show cover-zero and then back off at the snap into soft zone coverage to confuse opposing quarterbacks.

Even in a power-five conference such as the SEC, Mac Jones hasn’t seen anything like this yet.

To understand what Mac Jones will face on Sunday, let’s go back to last season’s tape to dissect the Dolphins’ cover-zero package.

When the defense runs cover-zero, that makes the quarterback throw “hot” to avoid a sack. Flores knows that the “hot” route for most QBs will come from the number two (slot) receiver on a quick-hitting route. The Dolphins pass rushers have a rule where if a blocker engages them, their rushers drop into coverage over the middle.

Here, the Rams have a quick slant route to Cooper Kupp as Goff’s “hot” read against a blitz. After the center commits to his block on defensive tackle Christian Wilkins, Wilkins drops out of the rush into coverage underneath Kupp’s route and intercepts the pass.

Flores’s scheme has a plan for defending “hot” routes against all-out pressure, and they’ll also confuse quarterbacks by bluffing a cover-zero blitz and dropping into seven-man coverages.

In this play, the Dolphins are in their amoeba front, with all the defenders in the box moving around before the snap. The pre-snap picture for the quarterback is cover-zero, but the defense drops into a cover-three zone. Chargers rookie quarterback Justin Herbert is confused by the disguise and throws into Xavien Howard’s leverage for an easy interception.

Miami tied for the league lead with 18 interceptions last season by forcing quarterbacks into mistakes with cover-zero blitzes and disguises.

The good news for the Patriots is that they know what to expect from the Dolphins’ defense, so how can offensive coordinator Josh McDaniels give Jones the tools to beat the Miami defense?

Knowing Miami has built-in rules for handling “hot” routes when they bring pressure, the best way to get the Dolphins out of cover-zero is to attack downfield against all-out blitzes.

In other words, hunt with the football against cover-zero because facing heavy pressure all day for a rookie quarterback is a recipe for disaster.

The Patriots and Jones can get Miami out of cover-zero by stealing a few ideas from the Arizona Cardinals and Buffalo Bills last season, as both teams found success by throwing deep.

Cardinals head coach Kliff Kingsbury had a brilliant protection plan. The Cardinals send speedy wideout Christian Kirk on a deep post pattern against an outside-leveraged corner without inside help from a deep safety, an easy win from Kirk. The challenge was keeping the rush off Kyler Murray long enough to get the ball to Kirk.

Arizona had its tight ends chip the ends, then used the Dolphins’ rules against them. Once the center reads the D-tackle over him dropping into coverage, remember those “hot” rules, he pulls to block the end, and Murray gets the pass off for a 56-yard touchdown to Kirk.

The Bills also had a similar idea of throwing the deep ball against cover-zero but protected Josh Allen differently. Buffalo motions wide receiver Isaiah McKenzie into the backfield, and max protects with eight blockers staying in to block the blitz. The Bills then send one of their fastest receivers, John Brown, on a vertical double-move against Byron Jones in single coverage, and it’s six.

There are various ways for New England to draw up the protections to buy time for Mac Jones, and hitting one of those deep balls, potentially to newcomer Nelson Agholor, could deter Miami from calling cover-zero.

One would also expect McDaniels to extend his “hot” routes this week. Instead of running a three-step slant over the middle, maybe it’s a five-step slant or skinny post, which should limit the effectiveness of those pass-rushers dropping underneath the hots.

CHECKS BASED ON DEFENSIVE PERSONNEL

New England has tons of flexibility out of 12-personnel due to Henry and Smith’s versatility. Both players can move around the formation, which gives McDaniels a trump card to Miami’s defensive personnel (and an answer if Nelson Agholor is out with an ankle injury).

Miami’s defense is built through a strong secondary, but their off-ball linebacker depth is thin and more of a run-stopping group.

If the Dolphins match 12-personnel with their base defense, expect Mac Jones to check into a passing play that spreads the defense out (potentially out of an empty formation) and attacks matchups with skilled pass-catchers on linebackers and safeties.

When the Dolphins have an extra defensive back or two on the field, the Patriots can bring Henry and Smith in line and run the football down Miami’s throat with Damien Harris and company.

The chess match between McDaniels and Flores will be decided by how the Dolphins match the Patriots’ two tight end package.

WHEN THE DOLPHINS HAVE THE BALL

Although the Patriots are plenty familiar with Miami’s defensive system, the Dolphins are a bit of an unknown on the offensive side of the ball.

Dolphins co-offensive coordinators George Godsey and Eric Studesville are splitting the responsibilities in a college-style setup in Miami. Godsey is likely in a passing game coordinator role with Studesville handling the running game based on their backgrounds.

Miami gave a glimpse into their reworked offense in their second preseason game against the Atlanta Falcons, where starting quarterback Tua Tagaviola played the entire first half.

Best part of Tua's game is still his pocket movement, imo. So good at sliding, eluding pressure while keeping his eyes downfield to throw. #Dolphins pic.twitter.com/Pd58rY9dOQ

Tagaviola’s processing speed, quick release, and footwork in the pocket stand out as strengths in his second season. Tua doesn’t have the strongest arm in the world, which limits him on second-reaction downfield shots, but he has an efficient process and zip on drive throws.

Here, the Falcons fall into a cover-two shell. Tua recognizes that the middle linebacker isn’t carrying the tight end up the seam. Usually, the defense plays a brand of cover-two (Tampa-two) where the middle linebacker is responsible for matching a vertical route between the two safeties, but this is standard spot-drop cover-two, so that area is vulnerable. After making a good read, Tua rips it between the two safeties for a completion.

Tua’s improvements are notable. But with this group of skill players, Bill Belichick’s message to his defense this week is keying on motion and misdirection.

Miami ranked third by utilizing pre-snap motion on 58.7% of their preseason plays and added speedster Jaylen Waddle in the first round to carry the football on designed touches. They’ll also use misdirection and quick passing to take the stress off of a vulnerable offensive line.

“There’s going to be a lot of misdirection and eye candy out there,” Patriots linebacker Dont’a Hightower said on Thursday. “They have a lot of skill players real good and they’re good in space. We are aware of that, so we are going to have to do a good job of fundamentals and those core keys.”

The Dolphins’ philosophies of motion and run-pass options on early downs aren’t new innovations in the NFL, but staying disciplined and reading through the eye candy will be a challenge.

Speed on speed, track guy on track guy, slot corner against slot receiver; the Jones versus Waddle matchup will be fun to watch. Waddle has a similar skill set to Chiefs wide receiver Tyreek Hill, and Jones usually draws the matchup with Hill when the Pats play Kansas City. Jones’s background as an open-field tackler on special teams helps him defend schemed touches, while he has the long speed to match vertical routes.

With Stephon Gilmore out of the lineup, Jackson will take a stab at Parker. Parker is a good matchup for Jackson. He’s a big-bodied outside receiver that wins at the catch point, while Jackson’s strengths are playing physical man coverage on the outside with good downfield ball skills. Parker isn’t overly quick or tactical with his route-running. For Jackson, this isn’t Stefon Diggs, it’s the right kind of matchup. Parker took a step back in production due to injuries last season but broke out with 1,202 yards and nine touchdowns in 2019. Plus, we all remember what he did to Stephon Gilmore in the 2019 finale.

The Patriots have a clear advantage with their defensive front matching up against a shaky Dolphins offensive line. Miami will likely be down starting left tackle Austin Jackson, who is on the COVID list. Little against either Uche or Judon is a massive mismatch for the Patriots. Little has some upside with a decent athletic profile, but he’s technically flawed and struggles with power. The Pats’ edge rusher should feast on Little this week. It could get ugly for Miami’s O-Line.

Gesicki is a tough cover. He’s one of those new-age tight ends who runs in the low 4.5s at 6-6, 250 pounds. He’ll play both in-line and detached from the formation. The expectation here is that Adrian Phillips and Kyle Dugger will get the majority of the work on Gesicki. But if those two struggle, Joejuan Williams or Jalen Mills could get a chance. Williams did a decent job on Gesicki in the 2020 season opener.

On paper, Howard has the clear upper hand here. But Agholor will get plenty of single coverage against Howard or Dolphins CB2, Byron Jones. He has to make them pay once or twice for playing without a deep safety. That’s why Agholor is here.