Patriots Game Plan: How the Pats Avoid the Panthers’ Pass Rush Taking Over on Sunday 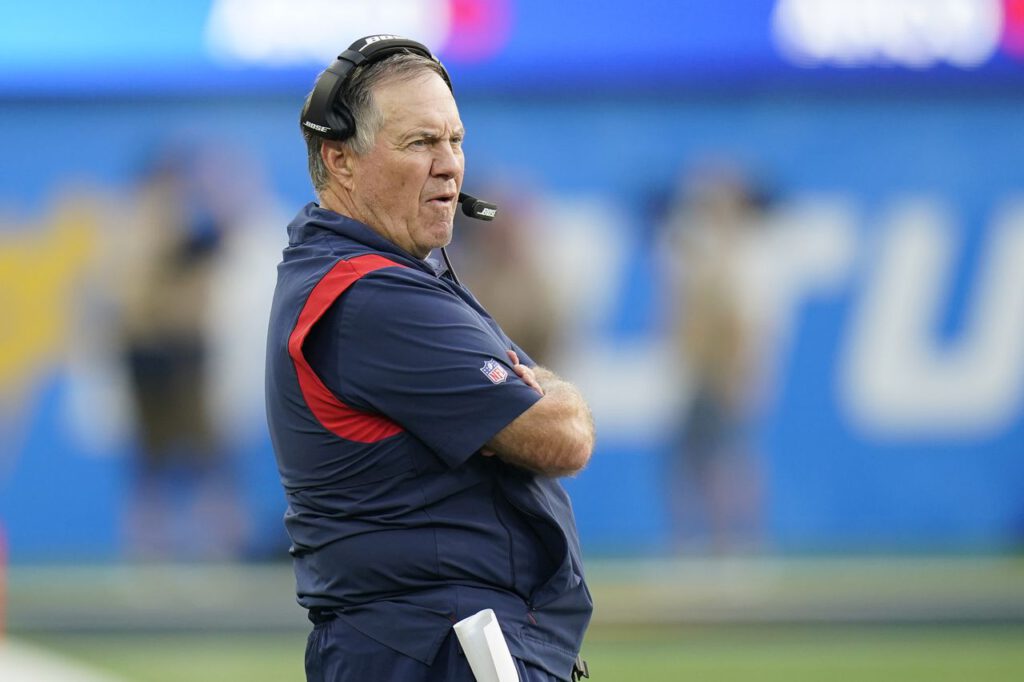 The Patriots put themselves in a legitimate position in the AFC playoff picture with their upset victory over the Los Angeles Chargers in impressive fashion on the road last week.

By winning two-straight to climb back to .500 (4-4), New England’s chances to make the playoffs improved dramatically and now sit at a favorable 57.3%, according to Football Outsiders.

Although the win in Los Angeles was a potential season-flipper, it’ll mean nothing if the Pats don’t take care of business in Carolina against a Panthers team that has lost four of its last five.

The Panthers were flying high after a 2-0 start where they sat atop Football Outsiders’ DVOA metric for the first time in team history, thanks to a defense that’s still among the NFL’s best.

This week, McCaffrey is back at practice as the Panthers begin his 21-day clock to return off injured reserve. He’s expected to play again this season, but his status for Sunday’s game is uncertain.

Along with McCaffrey, starting quarterback Sam Darnold’s (concussion) status is iffy for Sunday’s game as well, which means the Patriots will also need to prepare for backup quarterback P.J. Walker.

Although the injury uncertainties on offense add another layer, the real challenge comes on the other side of the ball with the Panthers defense, which ranks eighth in total DVOA, fourth in pressure rate and sacks, and has speed at all three levels.

Carolina head coach Matt Rhule brought longtime defensive coordinator Phil Snow with him from Baylor, and after hiring Brady to run the offense, is giving the Panthers a college-style feel.

With having terrific team speed and versatility in their defensive personnel, Snow knows how to use a talented front seven to his advantage by building a very diverse scheme.

Snow deploys an athletic group of defenders in several packages based on the situation and offensive personnel. Carolina will use both 3-4 and 4-3 base defenses, a 5-1 alignment, a 4-2-5 big nickel package, and a four-down dime grouping.

“They have multiple players play different things just based on what they have called with Coach [Phil] Snow. [He] calls what group they’re in, and then they have a couple different fronts to go with each group,” Patriots head coach Bill Belichick said.

“Those seven guys can be in different positions, and then you have to decide whether you treat them as a down lineman or a linebacker.”

In the secondary, Carolina is primarily a single-high safety coverage system that’ll rotate after the snap from two-high shells into cover-one or cover-three on 60% of their coverage snaps.

Although it’s less frequent than their post-safety structures, they keep offenses off-balance with 15.3 percent of coverage snaps in quarters.

As Belichick said, identifying the personnel and alignment of the Panthers’ defense will be a challenge for Mac Jones and the Pats offense. Then, it’s all about making quick decisions against an explosive front.

Like any defense, there are areas where Carolina is vulnerable, and some of those marry up with New England’s strengths on offense. After reviewing their tape, it makes sense why the Panthers traded for Stephon Gilmore.

After losing stud first-rounder Jaycee Horn for the season, the Panthers’ only reliable cornerback in coverage was Donte Jackson, and teams were finding holes in the secondary.

The key, of course, for any passing attack against Carolina’s pass rush is a quick release, and opposing offenses are averaging 10.3 yards per attempt on in-breaking routes (fourth-most).

Offenses found success by spreading the defense out to attack either man coverage or off-coverage defenders with quick-hitting in-breakers like slants, digs, under routes, and angle routes.

Here is a play we’ve seen the Patriots run plenty of times before this season. The Giants use shotgun play-action to pull the linebacker level up towards the line and then hit the dig route on time against a bailing corner. Instead of under-center play-action, which takes time to develop and forces the quarterback to turn his back to the defense, Daniel Jones’s eyes remain upfield where he can see the pass rush and get the ball out.

The Giants also found success against Carolina’s man-free coverages by attacking their depth in the secondary. This time, it’s Dante Pettis in the slot on a quick slant that hits for a big gain.

Dallas dipped into the in-breaking windows as well against the Panthers’ defense.

Above, the Cowboys attack a two-high coverage shell by sending the tight end vertically upfield to open space for an under route from the outside receiver.

Dallas attacked man coverage matchups over the middle using a condensed alignment here to threaten leverage in the tight end’s stem before breaking on an angle route.

The Panthers like to play with outside leverage in coverage. Some of their cover-one looks are man-free schemes to add a blitzer (no robber help), and there are other ways with play-action and clears outs that you can occupy inside help defenders.

The Patriots might struggle this week with longer developing runs like power or counter schemes with puller in the running game.

Instead, the Pats might dial-up more duo for the second consecutive week. Since the Panthers have a speedy, aggressive front, they get into the backfield and disrupt lead blockers. And if McDaniels is feeling tricky, Carolina is allowing 5.5 yards per rush on outside zone (above).

New England isn’t typically an outside zone-blocking rushing attack, but zone lead with fullback Jakob Johnson leading the way would be a good game-plan wrinkle. This could also be a week for the Patriots’ 22-personnel package where they can line up and run over Carolina’s defense instead of challenging their speed.

The game plan for the Pats offense will be centered around not letting the Panthers’ defensive front take over the game.

WHEN THE PANTHERS HAVE THE BALL

To nobody’s surprise, the Panthers are a different offense when Christian McCaffrey is in the lineup.

McCaffrey opens things up even when he’s not getting the ball. For instance, in the play above, the Panthers’ running back draws two underneath defenders from the backfield, opening the corner route to D.J. Moore in the cover-two hole for a big gain.

Carolina’s under-center play-action passing attack is also more potent with McCaffrey on the field. As you can see, he draws the underneath zone defender after the Houston linebacker reads pass, opening up the deep stop route downfield.

Under offensive coordinator Joe Brady, the Panthers play from under center and with bigger personnel on the field far more than expected when they hired Brady from the college ranks.

Brady was known for his empty formations and spread concepts at LSU, and those are in the playbook, but the Panthers only have 40 drop-backs from empty this season (18th in NFL).

Here, the Falcons use the slot defenders to rotate into a Tampa-Two structure with the linebackers in the A-Gaps popping out of the rush into the underneath zones. The scheme gets Darnold to hold the ball in the pocket, and the four-man rush gets home with a T/E stunt.

Atlanta also ran man pressure schemes that led to pressure on Darnold. Here, they ran a replacement blitz where they brought pressure from the interior and dropped the edge defender off in man coverage on the back. The inside twist gets home, and Darnold’s pass falls incomplete.

If it’s backup quarterback P.J. Walker for the Panthers, he’s not going to beat the Patriots from the pocket but you cannot let him take you by surprise. Brady will likely have some Walker-specific schemes in the game plan that will feature his mobility such as option-style plays, moving pockets, and designed quarterback runs.

Carolina has the personnel to put multiple tight ends on the field and run some of the triple-option plays that Houston and Baltimore feature against the Patriots, and the Pats will see them early in the opening script.

Walker is an athletic quarterback who can hurt you on designed runs, scrambles, and by extending plays. If he’s under center on Sunday, the Patriots need to turn it into a drop-back passing game. 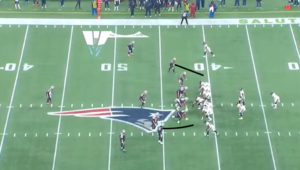 Belichick turned both Lamar Jackson and Kyler Murray into drop-back passers with a non-traditional alignment that he unveiled for the first time last season. The key to the game plans were wide edges, or overhangs, with athletic players such as defensive backs Kyle Dugger and Adrian Phillips as force defenders to contain outside runs.

By slowing down Baltimore and Arizona’s early-down option schemes, Belichick forced Lamar and Kyler to beat him in obvious passing situations from the pocket, and even the 2020 defensive personnel was successful.

KEY MATCHUPS (with a big-time emphasis on the trenches)

The Panthers move Burns and Reddick around, so it’s difficult to key in on a specific matchup for the starting tackles. Both win with tremendous speed (get-off) rushes and quickness as loopers on stunts. We’ll see plenty of chips, misdirection, and false run keys from the Pats this week to slow these two down. They’re a handful and are very capable of taking over a game.

Besides McCaffrey, the one player I’d love to take off the Panthers roster and put on the Patriots is Brown. He’s everything they look for in an interior D-Lineman: big, physical, quick, and instinctive. Brown wins with overwhelming playing strength and gets on you in a hurry at 320 pounds. He can single-handedly wreck the running game and collapse the pocket.

Panthers right tackle Taylor Morton is legit, so our theory is that the Pats will try to get as many one-on-ones for Judon as possible against left tackle Cam Erving. Judon may be able to take over rushing on Erving, and you can expect to see Judon and Barmore lining up over the left side to play a two-man game against Erving and left guard Pat Elflein.

We expect to see another zone-heavy plan for the Patriots defense against two talented receivers that are tough to cover on an island. Belichick called Moore “a problem” in a glowing answer about the versatile Carolina wideout. Anderson mentioned that the Pats targeted him in free agency this offseason (eventually settling on Nelson Agholor in that role instead). One would expect more match-zones (cover-3) and cover-two to leverage routes in the middle of the field and keep these two from creating explosive plays.