Patriots Game Plan: How the Pats Win a Battle in the Trenches Against the Browns 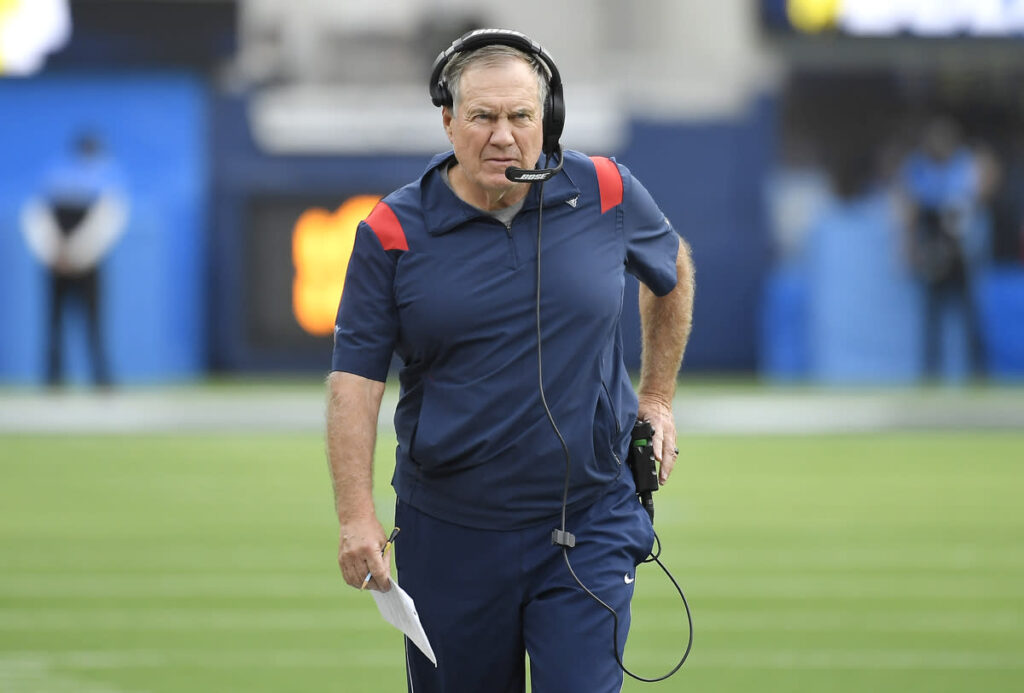 For those still into old-school, smash-mouth football, then Patriots-Browns at Gillette Stadium on Sunday is the game for you.

These are two organizations that are thankfully still investing and developing in the trenches.

Although it took New England longer to gel, both teams see the fruits of their labor as two of the best in the league on the line of scrimmage.

Bill Belichick consistently has his eyes on the line of scrimmage, but Cleveland general manager Andrew Berry has rebuilt the Browns in the right way from the inside out.

It's hard to find great OL today and the Browns have a full starting lineup of them:

The Browns recently signed both their starting guards, Wyatt Teller and Joel Bitonio, to extensions. The rest of arguably the best O-Line football is under contract beyond this season as well, with 2020 first-round pick Jedrick Wills on his rookie deal.

Then, Cleveland built their defense around 2017 number one overall pick, Myles Garrett, who leads the NFL in sacks and is a Defensive Player of the Year candidate this season. 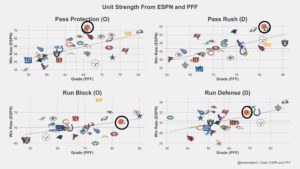 Berry’s work to restock the Browns’ offensive line and defensive front are paying off, while the strides the Patriots have made in the trenches will be put to the ultimate test on Sunday.

Let’s break down how the Pats win a battle in the trenches on Sunday against the Browns:

Whenever you go up against an elite pass rush, conventional wisdom says that run-pass balance is critical to slow down Myles Garrett and company.

Cleveland ranks second in the league in pressure rate (28.4%) and tied for second in sacks (27), mainly featuring a four-down linemen front without much blitzing by DC Joe Woods (obviously, they don’t need to blitz to get pressure with Garrett, Clowney, etc.).

Although Pats offensive coordinator Josh McDaniels will strive for some semblance of balance, the Browns defense is even more stingy against the run than they are as a pass defense.

Cleveland ranks 19th in Football Outsiders’ DVOA metric in pass defense despite having an elite pass rush compared to fifth in run defense. They’re also second-best in yards per carry allowed (3.9). In other words, good luck running the ball against these guys.

The best way to move the football against the Browns defense is for the Patriots to look back at their Week 4 game-plan against the Tampa Bay Buccaneers: quick, efficient, short passes.

Over the last two weeks, Bengals quarterback Joe Burrow and Pittsburgh’s Ben Roethlisberger were far more successful when they got the ball out of their hands as quickly as possible.

Burrow and Roethlisberger neutralized Cleveland’s pass rush and attacked the Browns’ zone coverages by releasing the ball quickly. Cleveland is in cover-three or quarters on 60% of snaps.

Expect the Browns defense to play the Pats offense with mostly single-high safety structures, with either cover-one or cover-three zone as the primary coverage call and an extra defender in the box to stop the run.

In that case, McDaniels will likely dial up his fair share of quick-game concepts.

Here, the Bengals use a motion by running back Joe Mixon to occupy the “buzz” safety rotating into the intermediate zone at the snap. The safety is responsible for the motion, stretching out the defense, creating a passing window for Ja’Marr Chase to run the glance route.

Cincinnati also attacked Cleveland’s post-snap safety rotations by throwing opposite the rotation. In the play above, they run a double-slant concept with Mixon releasing into the flat out of the backfield. The two slants occupy the underneath coverage players, and Mixon is wide open.

Then, the Bengals attacked Cleveland’s short zones with the tight ends over the middle. Above, Mixon’s release into the flat gets linebacker Malcolm Smith to widen towards the sideline. Burrow reads Smith’s drop and throws quickly to his tight end on the curl pattern.

The Patriots could also look to clear out the sideline with vertical routes to throw into the flats against either cover-three or quarters. This two-man route combination by the Bengals resembles the Pats’ branch/option concept where the vertical takes the deep zone defenders upfield, opening the sideline for the tight end route.

After a huge game out of the backs last week, the Pats could go back to Brandon Bolden again by isolating him on the Browns’ linebackers, as Cincinnati did here on the angle route to Mixon.

Pittsburgh also found success throwing into the middle of the field by isolating their tight ends on Cleveland’s linebackers in coverage. This time, they get Pat Freiermuth on the Y option look against Smith in a short zone, and it’s a first down on second-and-long.

Lastly, the Steelers found success with a low mesh/sit concept where the intersecting shallow crossers stretch out the middle hook zones and leave the sit route open.

McDaniels will likely test the Browns’ run defense early, as he did against Tampa, to see if there will be any yards available for the Patriots on the ground this week.

If not, which has usually been the case against Cleveland’s defense, then it’s time for the quick-game spread concepts with Mac attacking short zones.

WHEN THE BROWNS HAVE THE BALL

Cleveland has the best rushing attack in football, so stopping the run is much easier said than done; the Browns are first in rush DVOA, first in rush EPA, and first in yards per rush.

And although the Patriots might catch a break if star running back Nick Chubb isn’t cleared from COVID protocols in time for Sunday’s game, they’re still averaging 5.3 yards per rush without Chubb.

Chubb’s absence hurts the Browns more in the passing game because Baker Mayfield is a different quarterback off play-action, and teams respect the running game more when Chubb is in the backfield.

Although it’s much easier said than done, the Pats will win on Sunday if they limit the Browns’ early-down run and play-action sequencing to force Mayfield to beat them as a traditional drop-back passer. 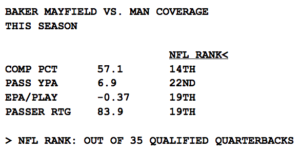 Along with the play-action splits, Cleveland is 25th in drop-back success rate on third down, and Mayfield struggles man coverage. But it’s challenging to get the Browns into third down where you can play man coverage (playing man against their play-action concepts is tough).

The Browns’ most frequently used run-blocking scheme is outside zone, which they’ll marry up with bootleg action, but they’re a dominant gap/power team as well (7.0 yards per rush).

The #Patriots opened the game with some beef on the field. Base 3-4 defense with Guy, Davis, and Godchaux as your three DLs. pic.twitter.com/g7XyulNFmG

Due to Cleveland’s ability to block power schemes effectively, the Patriots will likely deploy the same 3-4 base defense we saw last week against Carolina. In their base front, the Pats had three defensive tackles and four true linebackers in the game, loading up against the run.

The Browns’ offensive line is miles better than Carolina’s banged-up line was last week, but the Pats shut down Christian McCaffrey and the Panthers’ rushing attack out of their base defense.

“I like that front. That’s my favorite front,” defensive tackle Davon Godchaux told CLNS Media. “You got all the big guys in there. Let’s me be more versatile playing more four [technique], some five [technique], some three-technique, and teams can’t scheme up on us like that.”

From there, it’s a strength-on-strength matchup with the Pats’ play-action coverage versus the Browns’ play-action passes, where Baker is averaging 10.8 yards per attempt (second-best in the NFL). This season, the Pats are the fourth-best play-action defense (5.4 yards per pass).

With so many offenses around the league adopting multiple tight end formations and sequencing run schemes with play-action, Belichick has answered with cover-three zones in the backend that can take away the two-man route combinations with three defenders deep.

Carolina tried to hit shots off play-action with similar concepts that the Browns will use this week: post-crossers, levels off bootleg action, and the Pats were all over it.

Although Cleveland is a tougher opponent, the game plan for the Pats won’t be much different than last week against the Panthers; base fronts to stop the run, cover-three zone on early downs to take away shots off play-action, and force Baker (Darnold) to beat you on third down.

New England already has the blueprint. Now, they need to execute against better competition.

Yeah, this matchup on paper doesn’t look good for the Patriots. According to PFF, Garrett lines up over the left tackle on 87% of his snaps, so Wynn is drawing the favorite for DPOY. Garrett moves differently than any other pass rusher we’ve studied. He likes an inside-out rip move that’s so fluid he looks like a basketball player crossing up the tackle, except he’s 6-4, 270. And Woods makes it challenging to double-team him by playing even fronts with a three-technique on the same side as Garrett occupying the left guard. Get ready for a lot of chips from the backs and tight ends.

Better get your hard hats on, folks. Hightower and Bentley are two of the best take-on run defenders in football, going up against two of the most physical guards in the NFL. Teller and Bitonio pull in power schemes, climb to the second-level in zone blocking, and the entire Cleveland running game starts with them. I can’t wait to see the collisions we get between these four on Sunday.

The Browns play a lot of zone coverage, so it’s difficult to limit these to one matchup. Nevertheless, Smith and Harrison feel like the Waldo’s of the Browns secondary. Ward, Newsome, and Johnson are a tough trio to beat in the backend, especially when they’re aided by the pass rush. This should be a high-volume game for the Pats’ inside receivers.