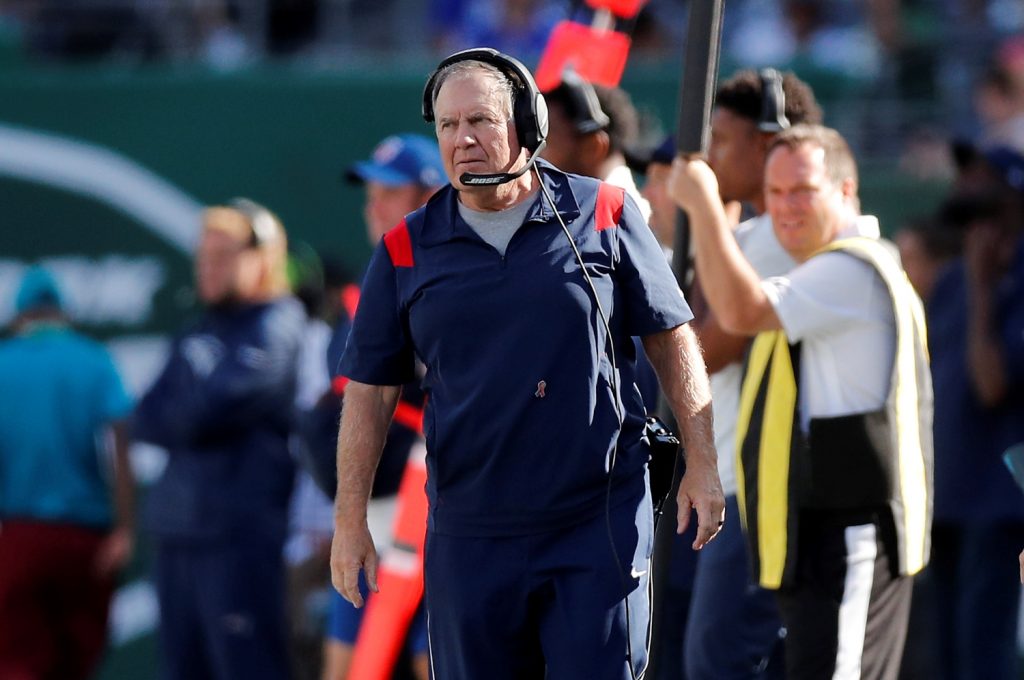 Patriots head coach Bill Belichick already has a presence at the Pro Football Hall of Fame in Canton, Ohio, with defensive game plans against all-time greats on display.

However, he has never had to game plan against the greatest quarterback of all time until now, when Tom Brady brings his league-leading Bucs offense home to Foxboro on Sunday night.

In a typical version of our Patriots game plan, we’d cite some fancy analytics about how this coverage or that blitz works against a particular offense and then back it up with film.

As one would expect, Brady is analytics proof. He’s good against man coverage, zone coverage, when the defense blitzes, when the defense doesn’t blitz, and so on. By the numbers, no defensive scheme has successfully shut Brady down since joining the Buccaneers.

Playing Brady is like defending an elite scorer in the NBA, such as Steph Curry. The Celtics can’t completely erase Curry from the game. Eventually, he’ll get his. But what Boston, or in this case, New England, can do is make life as difficult as possible for Brady on Sunday night.

The other element to Belichick’s game plan against Brady is that the Pats head coach can’t sit in his usual brand of press-man coverage (MOFC/cover-one) for four quarters.

Not only will Brady be fully prepared for Belichick’s man-heavy tendencies, but the Bucs have too many weapons for a Stephon Gilmore-less Pats secondary to play man coverage all night.

Are you going to trust these Patriots’ defensive backs sans Gilmore to man up on Mike Evans, Chris Godwin, Antonio Brown, and Rob Gronkowski (assuming he plays)? Yeah, me neither.

The most effective strategy to slow down Brady over the last two seasons is what the Los Angeles Rams did in their 34-24 victory over the Bucs in Week 3: the dink-and-dunk game plan.

Before you roll your eyes, no, we are not calling Brady a dink-and-dunker. Actually, it’s the total opposite, especially in Tampa. Since the start of 2020, Brady is sixth in average air yards per attempt (9.2).

Although the Bucs borrow things from Brady’s offenses in New England, head coach Bruce Arians’s “no risk it, no biscuit” philosophy is still omnipresent in Tampa Bay’s system.

Back to the Rams’ game plan, Los Angeles held Brady to his second-lowest air yards per attempt output as a Buc (6.8). Even though he threw for 432 yards, it took Brady 55 attempts, and, most importantly, the Bucs only scored 24 points (with a late touchdown in a 31-17 game).

Since joining the Bucs, Brady leads the NFL in completions and attempts of 20-plus air yards, but LA held him to just two-for-six on deep throws, with his furthest pass traveling 31 yards.

Los Angeles’s defense likes to start in a two-high safety shell, then rotate in and out of different quarters and cover three structures after the snap, which is a good strategy for two reasons.

One, it allows the deep safeties to leverage routes in the middle of the field. And two, LA begged Brady to hand it off because who wouldn’t? Above, they show two-high and get Brady to check into a run on third-and-five. Tampa only ran it nine times with their backs, but every play that isn’t a Brady pass is a win for the defense (remember the 2013 game plan vs. Peyton Manning and the Broncos? Two-high, empty the box, let him hand it off 30+ times. Too bad Brady won’t take the cheese).

When the Bucs went to the air, the focus, as it usually is with Brady, was on forcing him to check the ball down and throw it outside while pressuring the quarterback with a four-man rush. 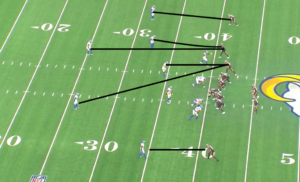 Here’s a perfect defensive rep when you go against Brady, a cover-7 call with a T/E stunt in a four-man pass-rush. Cover-7 isn’t a traditional spot-drop zone, especially for the deep safeties, as they have bracket calls rather than half-field assignments. For reference, the Giants used this call several times in Super Bowl XLII (2007 season).

As we roll the play, the defense takes away Chris Godwin and Cameron Brate in the middle of the field with their bracket calls, forcing Brady to hold the ball. Once Brady comes off Brate, the T/E stunt gets home, and he throws it away.

That was perfect defense by the Rams, but we know you can’t replicate that on every down. With that said, 31 of Brady’s 41 completions were within ten yards of the line of scrimmage.

Along with leveraging or cutting routes off with their two-deep safeties, the Rams also closed the middle of the field to take away Brady’s deeper options off play-action.

The Bucs ran “Charles Barkley” in this play, with the backside guard pulling off play-action to simulate a power run. This time, the safety on the right hash drops down to cut off Brate’s flag pattern, the post-safety helps leverage the vertical route, and the backside corner runs across with O.J. Howard’s crosser route, and Brady has to take the check down.

At times, Brady was unstoppable picking apart the Rams’ underneath zones and was a ridiculous 8-for-11 with average yards per attempt of 12.9 on intermediate routes.

But despite losing several battles to Brady throughout the game, Los Angeles won the war by eliminating explosive plays and forcing the Bucs offense to dink-and-dunk down the field.

Although the Patriots aren’t a zone-heavy defense, we know Belichick is a game plan coach who will morph his defense week-to-week.

The best plan against Brady over the last 20 years is to drop seven in coverage, rush four with stunts/twists, use deep safeties to close off the middle of the field, and force Brady to throw at your best coverage player (J.C. Jackson) on the outside.

Expect Belichick to take a page out of his past opponents’ book with the roles now reversed.

Along with standard T/E stunts, this seems like a great week to use TEX stunts with Matt Judon and the other Pats linebackers rushing Brady from over the guard-center in a two-point stance. Brady isn’t going to leave the pocket, so dial up the line stunts and forget about setting the edge because it’s a non-factor in this game.

From a Patriots perspective, my biggest concern in this game isn’t Belichick’s defense hanging with Brady and the Bucs offense.

The most significant hurdle to make this a game is blocking the Bucs’ defensive front. Going back to our Steph Curry analogy, Brady will score points, so to remain competitive, Mac Jones and the Pats offense will need to do the same. The Pats defense can only do so much.

The two big defensive tackles and excellent off-ball linebacker play make running the ball on the Bucs defense nearly impossible. Tampa Bay is Football Outsiders’ top-ranked run defense in DVOA since the start of the 2020 season.

The skinny on the Bucs defense is this: they’re vulnerable in the secondary, to the point where they signed Richard Sherman out of desperation this week, if you can protect the quarterback long enough to get the ball downfield (17th in pass DVOA). But protecting Mac Jones hasn’t gone well for the Patriots in the first three weeks of the season. How do they get it done? 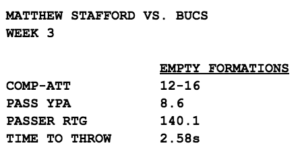 The Rams neutralized the Bucs’ pass-rush with empty formations and a quick release by quarterback Matthew Stafford, who averaged 8.6 yards on 16 attempts out of empty.

New England’s offense is running into issues when Jones holds the football in the pocket; give him defined pre-snap reads and get the pill out of there (Stafford clinic above).

The Patriots cannot repeat last week where Jones’s average time to throw was 2.92 seconds against the Saints, or this game will not be close.

If the Patriots play the coverages we are expecting, there will be a lot of one-on-one opportunities for Jackson against Evans. With Brady’s success attacking between the numbers, Chris Godwin working in the slot, and the Bucs’ tight ends, New England has to send help to the middle of the field. That’ll leave Jackson on an island versus Evans on the outside, and Brady will take shots in that direction. Earn that money, Mr. Jackson.

We trust Jackson to be competitive on Evans and assume it’s Jalen Mills with inside help on a big slot receiver in Godwin, making Antonio Brown a big-time X factor in this game. Brown is just coming off the COVID list this week, but he’s going to get plenty of single coverage as well. It feels like a matchup for Jon Jones, who can travel with Brown and match his speed.

In his first three games with the Pats, Judon has lined up almost exclusively on the edge of the defense. However, this is the week to bump Judon inside. This is not an edge-setting game with a stationary pocket-passer in Brady and a running game that likes to get downhill. The key to beating Brady is pressure up the middle with four, so line Judon up over the interior O-Line and let him wreak havoc from a two-point stance. Stunt him with Christian Barmore, slant him on an inside rush, and get him in Brady’s face. He’ll be a non-factor if he plays on the edge due to Brady’s quick release and short drops.

Good luck running the football against the Bucs over the last two seasons. Vea and Suh are a big reason why as two immovable objects in the middle of the line. If the Pats are going to succeed on the ground, they need to hold up in this interior battle.

Thinking about Barrett screaming off the edge against Herron is scary. Hopefully, Brown will be back. Regardless, Barrett is an elite pass rusher. He has a variety of rush moves from speed-to-power (hump), cross-chop, speed rush, and a nifty inside counter/euro step. He’s the real deal.