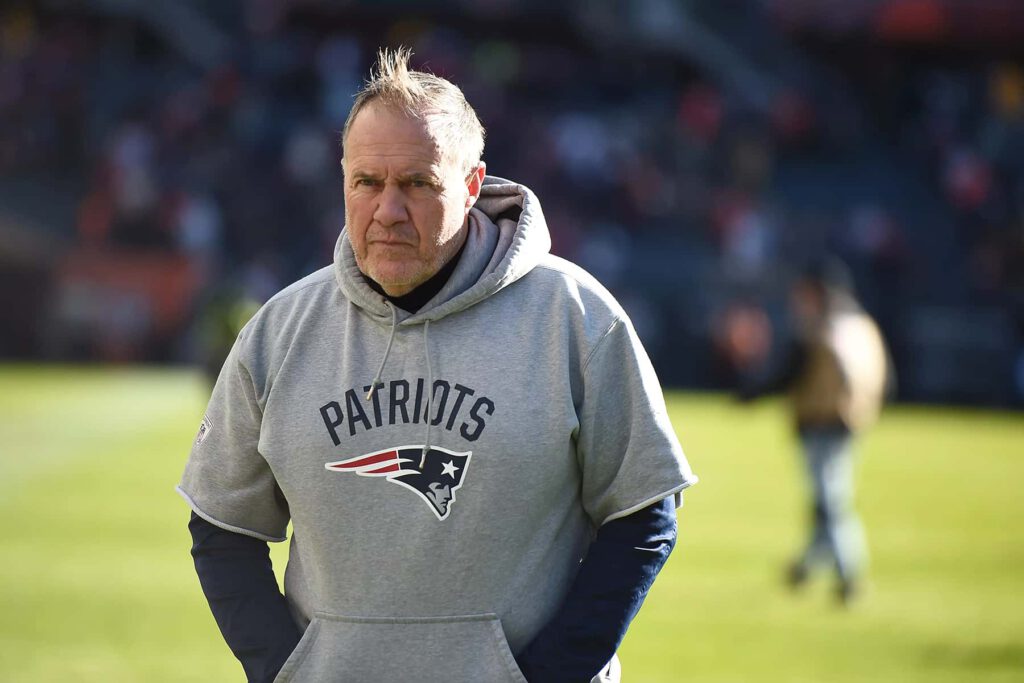 The Patriots (2-3) will have their hands full when the Dallas Cowboys (4-1) bring the number two scoring offense to Gillette Stadium on Sunday.

For our money, the Cowboys led by quarterback Dak Prescott have the most challenging offense to defend in the NFL due to their incredible balance in both the run and pass game.

Prescott is a dual-threat quarterback playing at an MVP level. Dallas has a potent rushing attack with two talented backs who can also catch the ball and three receivers who destroy man coverage and line up all over the formation. Stop one thing, and they’ll beat you with another.

The Cowboys can also play a smash-mouth style out of 12-personnel with a power running game and play-action or spread you out in 11-personnel.

The blueprint for slowing down Prescott and the passing attack is to play two-high safety shells like cover-two or quarters structures. Playing single-high against the Cowboys is asking to give up big plays, as Prescott averages a ridiculous 10.9 yards per attempt with an EPA per play of 0.63 when the defense plays either cover-one or cover-three.

The #Cowboys offense might be the hardest offense to defend in the NFL. Averaging nearly six yards per rush vs. two-high shells and one-high/man gets you beat like this. Truly a pick your poison game for the #Patriots defense. pic.twitter.com/9cu1NmYYUP

Most defenses don’t have the talent in the secondary to match up in man coverage against all of Dallas’s weapons.

Prescott’s efficiency significantly decreases when defenses play with two-high safety, forcing Dallas to dink-and-dunk down the field in the passing game rather than getting it all in one play.

The catch is that the Cowboys are averaging 5.8 per rush attempt when the defense plays out of two-high shells, so you need to prepare yourself to play a man down in the box. Oh, and you can’t blitz Prescott either (108.3 passer rating, league-high nine TDs versus blitz).

The game plan defensively for the Patriots should be to force the Cowboys to string together long drives and win as many third downs and red zone sequences as they can.

Dallas’s offense is terrific, but they’re 19th in red-zone scoring efficiency, meaning this will likely be a bend-don’t-break special from New England’s point of view.

With that said, Bill Belichick isn’t a big fan of two-deep safety coverages because it leaves you vulnerable versus the run and limits what you can do from a pass-rush standpoint. Although the Pats do it at times, usually the strategy comes against teams that don’t have a rushing attack on Dallas’s level, like the Chiefs, for example.

Here is what happens when you play with two-deep safeties against the Cowboys; a healthy dose of Ezekiel Elliott right down your throat with one of the league’s best offensive lines.

Our theory is that the Patriots will play their brand of early-down coverage with an extra defender in the box to stop the run and compete in the secondary with man and cover-three coverages. Ideally, that’ll get Dallas into obvious passing situations.

Sure, you might give up a big play on an early-down pass against single-high, but if you can limit the damage through the air and get off the field on third down, you have a chance. If you let Zeke go off, Dallas stays ahead of the chains with their running game and keeps you off-balance.

Last week, the Giants tried to play soft two-high coverages to prevent explosive pass plays, and the Cowboys ran for 201 yards and threw for another 324 because Dallas was calling whatever it wanted.

Hopefully, by stopping the run on early downs, Dallas will become one-dimensional on third down so the Pats can unleash their exotic coverages.

One of those exotics will surely be some form of a man-match coverage where DBs pass off receivers to leverage crossing routes downfield.

Above, the Giants play a great rep of one-cross where the original “rat” overtakes the underneath crosser, the boundary corner cuts off the deep over, and the number three CB becomes the new “rat” and helps to the dig route.

Another long down-and-distance option for Belichick is his cover-one “double” robber scheme. In this eight-man coverage, the Pats have two defenders read the quarterback on each hash at the sticks and a post-safety in the middle of the field to help man coverage defenders.

Lastly, when they’re in shorter down-and-distances, expect to see New England’s simulated pressure package again where they show blitz and back off at the snap. By threatening a blitz, they should get a one-on-one somewhere on the defensive line (for either Judon or Barmore) and drop defenders into low zones to take away easy conversions over the middle.

Bill Belichick’s game plan and New England’s defensive personnel did an excellent job against Tom Brady’s Bucs, who are in the conversation for the NFL’s best offense.

But the matchup against Prescott’s Cowboys is different because of Dak’s mobility, and Dallas’s rushing attack is more dangerous than Tampa Bay’s.

Plus, Belichick knew that Brady would read the defense inside-out from a coverage standpoint, and taking away the underneath throws over the middle would cause him to hold the ball and allow the rush to get home.

The only way to slow down the Cowboys’ multi-dimensional offense is to play great early-down defense, where Dallas is second in EPA per rush and rushing success rate this season.

If the Cowboys find themselves in favorable down-and-distances, it will be a long Sunday evening for the Patriots defense; their only hope is to cause Dallas’s drives to stall.

The two-high safety structures mitigate the damage with Dallas’s passing attack, but they’re averaging 34 points per game because the Cowboys’ offense is staying ahead of the chains, opening the playbook for OC Kellen Moore.

As Pats defensive tackle Davon Godchaux likes to say, “stop the run and then have some fun.”

Although Dallas’s defense is significantly improved this season, the matchup for Mac Jones and the Patriots’ offense is good if the Pats can avoid turning the ball over.

Cowboys defensive coordinator Dan Quinn comes from the Seattle coaching tree, but he overhauled elements of his coverage system after getting fired by the Falcons last season.

“The foundation of it is similar. I wouldn’t say it’s quite the same,” Belichick told CLNS Media.

The new wrinkle for Quinn with the Cowboys is more man coverage and less Seattle-style cover-three. Dallas’s most-called coverage is now cover-one (34.4%). Although the Seahawks do their fair share of this, Dallas is playing a lot of “three buzz” and one-robber where they start in a two-high shell then rotate one of those safeties down into a middle of the field zone.

The Cowboys are holding up well on the outside, and star cornerback Trevon Diggs is a turnover machine (six iNTs through five games).

But the good news is that their middle-of-the-field coverage defenders are vulnerable, and the linebacker level led by rookie Micah Parsons struggles in coverage.

In the first five games of the season, the Cowboys defense ranks 22nd in DVOA against passes to the middle of the field and is 31st in Football Outsiders’ rankings at defending tight ends.

To put it in simpler terms, get ready for a heavy helping of man coverage beaters with Hunter Henry, Jonnu Smith, Jakobi Meyers, and Kendrick Bourne working between the numbers.

Based on what worked for the Giants and Bucs, expect offensive coordinator Josh McDaniels to dial-up various rub routes and stress Dallas’s man coverages with bunch and stack alignments.

Plus, this should be another big play-action week for the Patriots where they try to hit in-breaking routes against out-leveraged DBs with the second level stepping up to play the run.

The best possible matchup for the Pats is a pass defense that’s vulnerable in the middle of the field, so they have that going for them this week.

A little outside the box here, but a critical angle to this game. If Jones gives the Cowboys defenses as many opportunities to turn the ball over as he did against Houston, the Patriots have no chance. Dallas averages 2.4 takeaways per game, which is the second-most in the NFL. They won’t drop interceptions at the rate that the Texans did last week.

Martin is the best guard in the NFL, and the Cowboys are nearly unstoppable when they run behind him. How is this for a stat: the Cowboys run into Martin’s gap on 59% of their rush attempts and average 6.5 yards per carry, per SIS. Furthermore, they average 6.7 yards running into right tackle Terence Steele’s gap, which is likely a testament to Martin as well. This is an absolutely massive game for Guy and Godchaux. Better bring your hard hats, fellas.

Schultz is underrated. Prescott has one incompletion (15-of-16) throwing to Schultz against zone coverage, and the Cowboys’ tight end is second in the NFL in man-coverage grade (91.9). He’s a very savvy route-runner, and Pats safety Devin McCourty described Schultz as a “security blanket” for Dak. With all the attention on the wide receivers, Schultz is quietly leading Dallas in receptions with 26. Don’t be surprised if we see some “big” nickel with three safeties on the field on early downs.

Cooper is a tough assignment for Jackson as one of the best route-runners in the NFL. He’s a similar cover to Stefon Diggs in that the key to stopping him is throwing off his timing. Although it’s easier said than done, Cooper is electric at the top of the route and will burn you if you don’t get your hands on him early in the route. Expect Jackson to play a physical press-man technique against Cooper on Sunday.

Let’s hope that Mills (hamstring) returns for the Patriots this week. Otherwise, they have nobody to cover Lamb, who is too big for Jon Jones and too good for Joejuan Williams. Lamb lines up everywhere, is an excellent vertical route-runner and is great with the ball in his hands. It’ll be interesting to see what the plan is for Lamb if Mills can’t play.