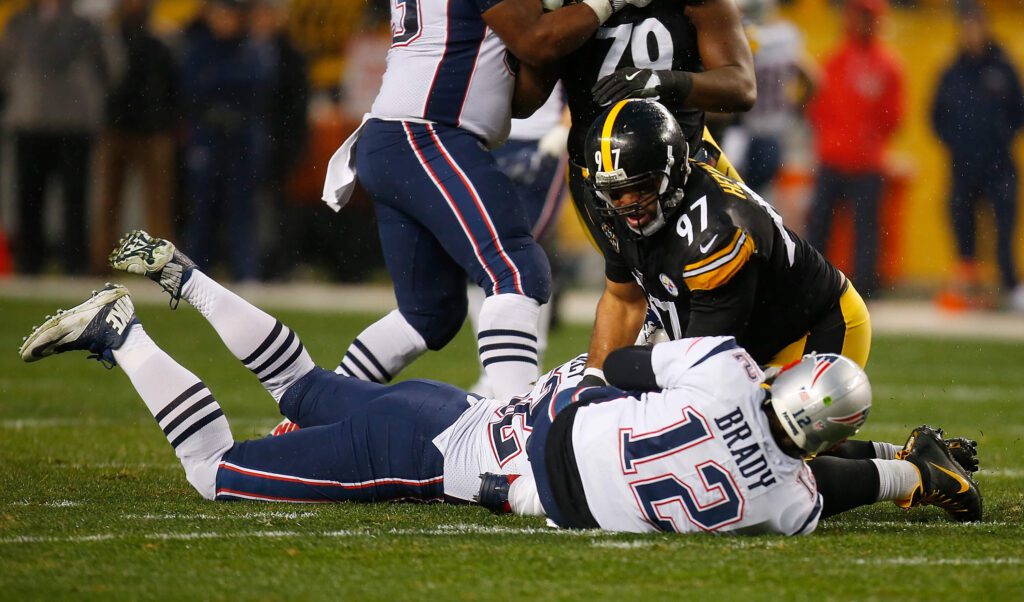 FOXBORO — The Patriots and Steelers will meet for the 15th time in Tom Brady’s career to kick off the 2019 season on Sunday night.

The Patriots, for a third time, will drop a Super Bowl banner with Big Ben and company in attendance, and the Steelers know first-hand about New England’s success.

With Brady at quarterback, the Patriots are 11-3 against Pittsburgh with a perfect 3-0 record in the postseason.

However, for the first time since the 2011 season, Roethlisberger got the better of Brady with a 17-10 win at Heinz Field last December.

Although that was last season and this is this season, both head coaches acknowledged the relevance of last year’s matchup.

“I don’t think it’s insignificant,” Patriots head coach Bill Belichick said. “There’s a lot of people that did play in that game that will be playing in this game, so I do think there’s a relevance. I wouldn’t want to say it’s zero.”

“I’m sure we’ll glean some things from it, as I’m sure they will. Some of it will remain the same for us as it will them. Some of it will produce reasons for change,” Steelers coach Mike Tomlin told me.

With this year’s matchup coming in Week 1, there isn’t any tape on either team to comb through from the current year.

And both coaches and teams are going on two decades with the same systems on both sides of the ball, so there shouldn’t be any major surprises schematically.

For this week’s Patriots gameplan, let’s take a look back at that Week 15 matchup and see what we can learn:

Since the 2016 AFC Championship Game, the popular narrative on the Steelers defense when they play the Patriots is that they sit in zone coverage the entire game.

Former Steelers defensive coordinator Dick LeBeau was the pioneer of the zone blitz system, and Tomlin continues to keep some of those schemes in Pittsburgh.

However, since Brady carved up the Steelers secondary en route to the Super Bowl, Pittsburgh shifted its approach both against the Patriots and the rest of the league.

In their last two matchups, the Steelers incorporated more man coverage, and last season, they ranked third in the NFL in man coverage frequency (52.2).

The Pittsburgh defense played zone or match coverage on early downs, but in critical situations, they went to man coverage keying on Julian Edelman and Rob Gronkowski.

Here are three great examples of what the Steelers did to disrupt New England’s passing attack.

The Patriots are in an empty formation with running back James White flexed out wide on third down. The Pats also put Julian Edelman (inside slot), Gronk (outside slot) and Josh Gordon (boundary) together on the three-receiver side. After the snap, the safety at the top of the screen comes down to double Edelman’s crossing route while the other safety shades over the top of Gronk’s slot fade. With the defense doubling Brady’s top receivers, and T.J. Watt in his lap, he’s forced to throw to a covered White on a curl route.

The Patriots bring Chris Hogan in motion across the formation before the snap. His man follows him, which tells Brady it’s man coverage. Brady puts the Patriots in a man-beater, slant-flat to both sides. Once again, the safeties key on Edelman and Gronk, but when Edelman goes to the flat, the field safety rotates onto Gordon’s slant. The only option for Brady is Hogan in the flat, and the former Pats receiver had some space, but couldn’t make the defender miss, and is tackled short of the sticks.

Brady is pressured into another quick decision in the red zone here. This time, the Steelers only double Gronkowski with a bracket coverage as he works across the field. The rest of the receivers are covered tightly, and although Hogan (slot post) and White (option) come open late, the pressure forces Brady to get rid of the ball.

The combination of pressure from the front four and doubles on the Pats top weapons gave the Patriots offense problems, so the question is what do they do differently this time?

With Gronk out of the equation, the Steelers will probably double Edelman even more than they did last year.

Here’s my unsolicited advice for Josh McDaniels in three parts:

1. Experiment with formations: the Patriots threw out of 11-personnel (3 WR, 1 TE, 1 RB) on 75 percent of Brady’s drop-backs. That’s a ten percent increase from their season average. McDaniels probably wanted to spread the field against Pittsburgh expecting mostly zone coverage. Using multiple running backs or attacking a thin Steelers secondary with four receivers could lead to some favorable one-on-ones. I also wonder if the somewhat vanilla game plan last season had something to do with Josh Gordon’s situation. Gordon shut it down for the rest of the season after the loss in Pittsburgh.

(clip from Do Your Job Part 3)

2. The Patriots did use some pre-snap motion as they always do, but I think they need to do it even more. In the AFC title game back in January, the Patriots motioned Edelman into stack alignments to get him free releases at the line of scrimmage and create confusion. If the Steelers go with a man heavy approach like the Chiefs did, the Pats offense should do the same thing. It’ll give Edelman a chance to beat some doubles and create hesitation for the other defender in the stack, which could lead to openings for others.

3. My final point isn’t directed towards McDaniels, but rather the Pats skill players. With the Steelers doubling Edelman, that’s going to present one-on-one opportunities for others, and it’s on them to win those matchups. Gordon and Hogan struggled last season to beat single coverage. That needs to change this time around for Gordon, White, Dorsett and hopefully Demaryius Thomas.

The Patriots had a fantastic plan for slowing down then power duo Antonio Brown and JuJu Smith-Schuster, but it came at a cost.

The Steelers are primarily an 11-personnel team with three wide receivers on the field for 70 percent of their snaps last season.

With all the attention on Brown and Smith-Schuster, the Steelers put three receivers on the field with Big Ben in the shotgun, forcing the Patriots into either their nickel or dime defense.

Then, Pittsburgh ran the ball and ran it ridiculously well out of the gun.

On 14 carries from shotgun, the Steelers averaged 8.7 yards per rush compared to only 3.3 yards on 11 carries from under center.

The Patriots were also in dime defense with six defensive backs on 11 of Pittsburgh’s 25 rushing attempts, and the Steelers gained 9.5 yards per rush on those plays.

“They do a lot to keep you off-balance with some misdirection plays and RPO’s, things like that,” Belichick told me. “They do a good job schematically, they tie it in with their passing game well, so it’s hard to just zero in on one thing.”

The misdirection plays from shotgun gave the Patriots fits, and led to 158 yards on 25 carries for Pittsburgh (6.3 average).

Here’s a basic inside zone handoff by the Steelers. First, note the defensive personnel. The Patriots are in a dime defense with three safeties and a light seven-man box. The Steelers double-team at the point of attack on the two interior defenders. Running back Jaylen Samuels does a great of hiding behind his blockers to make the unblocked defender, Kyle Van Noy, pick the wrong gap. The run goes for ten yards.

Earlier in the game, the Steelers ran a zone rollback concept that has many of the same keys as an inside zone run. The linemen step like inside zone, and the defense flows in that direction, but the blockers are trying to pin the defense down so that the back can cut the run backside. Samuels does just that and goes for a 25-yard gain.

As Belichick said, you can see the complementary and misdirection elements of the Pittsburgh rushing attack.

The solution for the Patriots might stem from the changes in personnel for the Steelers offense.

Without Brown, the Patriots don’t need to commit as many resources to stopping Pittsburgh’s passing attack and don’t need to match their base 11-personnel with six defensive backs.

Expect the Patriots to play more heavy run-stuffing fronts against the Steelers this time around with only one safety deep to support the corners or double Smith-Schuster.

– Marcus Cannon vs. T.J. Watt: Cannon had a tough game against Watt last year. Watt had a sack, two quarterback hits and two other hurries on Brady. Cannon gave the Steelers pass rusher credit for changing up his approach down-to-down and improving year-to-year. Pittsburgh doesn’t flip their pass rushers, so that’ll be the matchup again.

– Plan vs. JuJu Smith-Schuster: the guy in Pittsburgh now is the third-year wideout from USC. Last season, JC Jackson covered Smith-Schuster on 86 percent of his routes, holding him to three catches for 39 yards on eight targets. With that kind of success, it would make sense for the Pats to stick Jackson on JuJu again. But without Brown, Stephon Gilmore could draw the matchup. My guess is that JC will cover JuJu with safety help leaving Gilmore on an island with Donte Moncrief and Jason McCourty on James Washington.

– Tough Opening Test for Ted Karras: the Patriots’ first game without center David Andrews is a tough assignment for Karras. The fourth-year pro is a reliable insurance policy, but he’ll have to deal with two-time Pro Bowler Cameron Heyward and Stephon Tuitt. Last season, Heyward (four pressures) and Tuitt (three pressures) made Brady uncomfortable with a strong push up the middle.