Patriots Game Plan: How the New England Defense Can Avoid a Repeat of Super Bowl 52 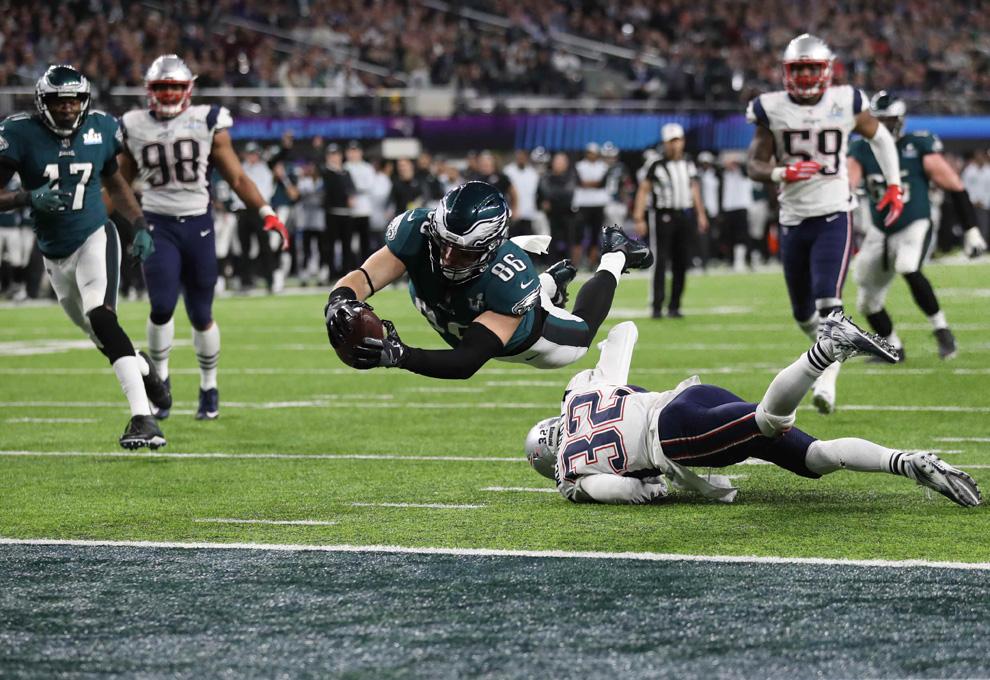 FOXBORO — When the Patriots take the field at Lincoln Financial in Philadelphia, they’ll be 651 days removed from losing to the Eagles in Super Bowl 52.

Since that Sunday in Minneapolis, where Bill Belichick’s defense surrendered 41 points and 538 yards, the Patriots avenged the loss by winning Super Bowl 53, their sixth championship.

Patriots players this week acknowledged that losing in 52 fueled them to come back and win 53 the following season, while Belichick discussed the relevance of that game this week.

“There are some similarities in matchups there. There’s quite a few differences, but it’s worth looking at,” Belichick said.

From a big-picture perspective, the Patriots recently have struggled against the Pederson-style offense that started with his mentor Andy Reid.

Pederson held several roles on Reid’s staff, including three seasons as offensive coordinator in Kansas City, before taking over Reid’s old team in Philadelphia in 2016.

The Reid-Pederson offense combines the old-school west coast system with air raid elements such as RPOs, mesh concepts, and vertical passing concepts. There’s more to it than that, but that’s the general gist of what some refer to as the “west coast college” offense.

In their last four games against the Eagles and Chiefs, the Patriots allowed 42, 41, 40, and 31 points defensively, an average of 38.5 points per game allowed, and a 2-2 record.

Let’s go over a few of the staple concepts that gave the Patriots problems in the Super Bowl:

One of Pederson’s go-to passing plays is a horizontal stretch of the field in the mesh concept.

The #Eagles got several big plays off different mesh variations in SB52. Some of the biggest plays of the game:

– Mesh on third down conversion to Agholor (Bademosi missed tackle)

– Mesh on Ertz fourth down conversion in 4th QTR pic.twitter.com/eI49znYt07

Three of the biggest plays of the game were different variations of mesh.

Here’s a diagram of the Eagles’ favorite variation of the concept where the receivers intersect on crossing routes over the middle of the field while a third receiver runs a spot route into the middle of the field. Sometimes, the running back runs a wheel route from the backfield instead of a receiver in the slot. Against man coverage, the traffic creates natural picks that are difficult to navigate for the back seven. In zone coverage, the crossers stretch the underneath zones, opening a bubble of space for the spot route. Plus, the offense usually gets a one-on-one matchup on the wheel.

After the Super Bowl, and after the Jacksonville Jaguars torched the Pats with mesh early in the 2017 season, Belichick and the Patriots began to make adjustments to their man coverages.

Here’s an example from their win over the Miami Dolphins last season, two weeks after the loss to Jacksonville. The Dolphins ran three crossers at different levels intersecting over the middle of the field, and the Patriots show man coverage.

The Pats secondary reads the play and adjusts the coverage on the fly from man to a coverage concept called one-cross. Stephon Gilmore (bottom) falls off his man to “cut” one of the shallow crossers while the “robber” safety, Devin McCourty, jumps the crosser going in the opposite direction. With McCourty and Gilmore taking the crossers, Jon Jones replaces McCourty as the robber in the middle of the defense.

When we roll the play, the Pats secondary perfectly passes off the crossing routes, forcing Ryan Tannehill to hold onto the ball and take a sack.

Here’s another example from the preseason against the Carolina Panthers of the Patriots checking to one-cross against mesh.

Now that the Patriots are on the same page in the backend to handle crossers, they’ll be better suited to handle the scheme against the Eagles this time around.

If you turn on an NFL broadcast nowadays, you’ll hear the term “RPO” used both correct and incorrectly ad nauseam.

The key to identifying an RPO is to keep your eyes on the offensive line and the receivers.

With the receivers, you can identify an RPO if they are running pass routes instead of blocking as they would on a running play.

As for the quarterback, there are some discrete tells, but what you need to know is that he’s going to read one defender, usually a linebacker at the second level, and make a decision based on whether that defender plays the pass or run.

“They incorporated it into their offense several years ago and continue to use them,” Belichick said of Philadelphia’s RPO schemes.

Philadelphia’s favorite RPO concept gives Carson Wentz the option to hand the ball off to the back on a zone blocking scheme or throw a slant route on the backside. Sometimes, there are double slants opposite the run, and tight end Zach Ertz is usually in the slot and the first option.

Here are the Eagles running one of their RPO slant concept with inside zone blocking for the running back. Unlike the diagram, the run action goes towards the two-receiver side. Wentz reads the safety to his right, who takes a step towards the line of scrimmage, giving Wentz a pass read. Wentz hangs onto the ball until the slant to Mack Hollins clears the safety and completes the pass.

For the full picture, on this play from Super Bowl 52, Foles sees the linebackers sit back and play pass, so he hands the ball off to the back.

This season, the Eagles have run the second-most RPOs in the league with 97, trailing only guess who? Andy Reid’s Chiefs. Of those 97, Philly runs the ball 80 percent of the time, according to Pro Football Focus.

And on his 18 passing attempts off of RPO actions, Wentz is 13-of-18 for 85 yards, which is a lowly 4.7 yards per attempt, per Sports Info Solutions.

The idea of the RPO is to put the defense in a no-win scenario, so the Patriots could overplay the run forcing a pass read, anticipate only a few different route combinations the Eagles use and tackle. If they can limit yards after the catch and stop the run, which they failed to do in 52, Philly won’t go far on RPOs.

OTHER FILM NOTES ON THE EAGLES

1. Final Piece to the Eagles Offense: Operating out of 12-Personnel

Along with the schemes, the Eagles offense also uses more 12-personnel packages than any other team in the NFL (2 WR, 2 TE, 1 RB). In those groupings, Dallas Goedert joins Ertz on the field, giving the Eagles two interchangeable threats at tight end.

“Those two guys combined play a lot,” said Belichick of Ertz and Goedert.

“It’s usually Ertz in 11-personnel but not always. Goedert plays in there a decent amount too, and obviously they’re both on the field when they go to 12. They’re, I would say, interchangeable. They’re able to move guys around to different spots. I’d say he plays probably a little more tight end than Ertz does, but they both play it and they can both extend outside and in slot, play off each other as well as – [Nelson] Agholor is a little bit part of that too, as well as the back. They’re versatile, they’re obviously smart. They can do, like I said, several different things and run the same play from different formations and different looks, so it’s the same but it doesn’t really look the same to the defense.”

This season, opponents have 29 drop-backs against the Patriots defense out of 12-personnel and found some success passing the ball relative to other groupings against New England.

Belichick’s scouting report on Ertz suggested that he looks at him as a slot receiver as well as a tight end. As a receiver, the two-time Pro Bowler runs a huge route tree for a tight end and plays 63 percent of his snaps detached from the formation, either in the slot (145 snaps) or out wide (66). Based on that, the Patriots could put a cornerback on Ertz, my money is either on Gilmore or JC Jackson, in some situations.

The Patriots did put up 33 points and 613 yards on the Eagles defense two Februarys ago. Like the other side of the ball, it’s a different game with new players and matchups. However, schematically, the same advantages through the air still exist. Similarly to Philly’s game plan, the Patriots attacked the Eagles defense on crossing patterns in 52. So far in 2019, teams completed nine out of ten passes for 125 yards on crossing routes against Jim Schwartz’s defense, 12.5 yards per attempt, and a 152.1 rating. The Eagles are mostly a post safety team operating out of cover-1 (man) and cover-3 (zone) structures, which makes them susceptible to crossers. Schwartz arrived with Peterson to run the defense in 2016.

The Lions found success on crossing routes with Matthew Stafford completing all four of his passes for 80 yards and a touchdown on either drags or deep crossers. On the play above, it looks like the Eagles are in a match cover-3 zone, and the Lions flood the downfield zones sending Danny Amendola across the field underneath the second-level defenders. Malcolm Jenkins leaves the flat to cover the slot receiver, the fade on the outside takes the corner, and Amendola is wide open in the flat. If he’s given time and open receivers, Tom Brady should find success against this secondary.

Finally, the Eagles have two more components that deserve mentioning in this matchup in All-Pro defensive tackle Fletcher Cox and the offensive line.

In a world where Aaron Donald doesn’t exist, Cox would be the best interior defensive linemen in the NFL. He’s got power, elite first-step quickness, and range. He makes more plays chasing down running backs than any player at his position. If you double him, which most teams frequently do, he uses his explosiveness to shoot off the ball and split it before the offensive linemen can get on their blocks. The Patriots will have a plan for him, and they need a big day from the three guys on the interior.

Philadelphia also has one of the best offensive lines in all of football. They’ve been good for a few seasons now, and they were tremendous in 52. Right tackle Lane Johnson, right guard Brandon Brooks, and center Jason Kelce are three of the best offensive linemen in the NFL, let alone at their respective positions. The Eagles’ speed and athleticism stand out the most on tape. They flow quickly and cover a lot of ground with guys blocking downfield in the secondary. On the left side, first-round pick Andre Dillard fits that mold, and although he’s raw, he’s refined enough to start as a rookie at left tackle. If there’s a weak link, its left guard Isaac Seumalo, but he held up well in the games I watched with the guys around him. This unit can dominate a game when the Eagles have the ball.