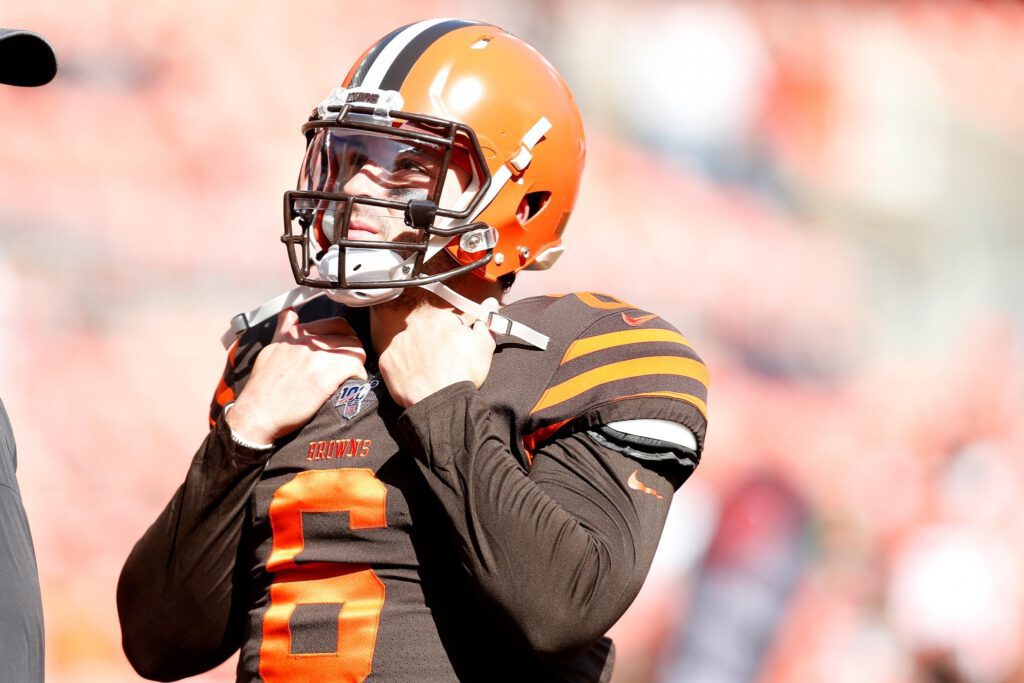 FOXBORO — the Cleveland Browns are a perfect example of a team that’s trying to learn how to win consistently in the National Football League.

Kitchens had the bye week to self-scout and try to fix what has gone wrong for Cleveland, who aren’t playing up to their potential on either side of the ball, so we’ll see what adjustments they make this week.

Studying their first six games, Kitchens’s offense was searching for ways to get new star receiver Odell Beckham, Jr. involved, which took quarterback Baker Mayfield out of his comfort zone.

Mayfield, the first overall pick in the 2018 draft, is at his best when he can stress the defense with quick decisions on timing throws or RPO reads and pick out matchups before the snap.

If Kitchens is smart, and there were signs of this before the bye, he’ll get Baker back into that groove. Assuming Cleveland’s offense will be at its best, there are ways to slow them down.

Mayfield currently leads the league in interceptions with 11 in six games, many of those were tipped balls or poorly timed throws, but he has issues with reading disguised coverages.

The team that implemented this strategy against the young Browns quarterback was New England’s last opponent, the New York Jets. Watching Cleveland play New York in primetime back in Week 2, you could see a blueprint that fits what the Patriots typically do.

Here’s the picture the Jets gave Mayfield on a second-down play in the first half before the snap. Based on the safety alignment, Mayfield is expecting to get a single-high coverage. Against that coverage, Mayfield wants to work the dig route by the inside slot receiver.

After the snap, the Jets rotate into their version of a Tampa-2 coverage, a two-high safety look. Mayfield is still locked onto the dig route, the single-high beater, and misses the proper read on the curl route into the soft spot of the zone.

When the expected target isn’t open, Mayfield leaves the pocket and makes a dangerous throw on the move that the Patriots defense will intercept every time on Sunday afternoon.

Here’s another example of the same issues for Mayfield. Again, the Jets defense shows a single-high man coverage before the snap. Mayfield has a slot fade with a dig route to his right, and the slot fade is an excellent option against this kind of coverage.

As we roll the play, the Jets rotate into a two-man coverage with the safeties splitting the field. The corner is over the top of the slot fade while the deep safety is rotating over, and the boundary defender reads Mayfield’s eyes to drop underneath the slot as well. The open receiver is the underneath five-yard in cut, but Mayfield locks onto the slot fade and then needs to escape the pocket when the pressure comes. He ends up scrambling to his left and attempting another dangerous throw across his body that’s batted down at the line of scrimmage.

The Patriots defense might be the best unit in the league at disguising coverages in the secondary and changing the picture on quarterbacks to create confusion.

Plus, they’ll also throw disguised pressures at Mayfield that he’ll have to be ready for Sunday.

One thing that was clear with Darnold on Monday night was that the young quarterback couldn’t diagnose when he was “hot” on a play. When the defense brings more rushers than the offense has blockers, it’s on the quarterback to get rid of the ball knowing they are shorthanded.

On John Simon’s strip-sack, the Patriots have seven defenders on the line of scrimmage against six blockers. Darnold properly sets the MIKE point to slide the protection towards the overloaded left side, but he has to know based on the protection that if the third defender to his right blitzes, he’ll be unblocked. He’s “hot” once Simon rushes. Despite the free runner, Darnold hangs on to the ball, and Simon creates the turnover.

Based on the tape, Mayfield has shown the ability to diagnose blitz packages and protect himself adequately in the pocket. His stats against the blitz are mostly better than when he isn’t blitzed.

But the Patriots present a different look with their zero blitzes and bluffs than other defenses.

Can he protect himself and read out the coverages after the snap better than Jets quarterback Sam Darnold? We’ll see.

Before we get to some other notes on the matchup, we must discuss the impact that the bookend pass rushers on the Browns defense could have on this game.

Both 2017 top pick Myles Garrett and offseason acquisition Olivier Vernon could potentially wreck this game for the Patriots offense. Maybe not to the point it’s a loss for New England, but the duo is a problem.

Garrett, in particular, is a scary matchup for left tackle Marshall Newhouse due to his freakish athleticism; he moves differently than other people that are his size.

Against the Seahawks, Garrett had a ridiculous ten quarterback pressures sacking Russell Wilson twice in Week 6.

Garrett is still raw, he wins mostly with his elite movement skills and not technique, but the Patriots need a plan to stop him because it’s a significant mismatch for Newhouse. Chipping with the backs and tight ends and even doubling Garrett with inside help or an extra blocker are all possibilities. In obvious passing situations, they can’t leave Newhouse one-on-one often.

Other Film Notes on the Browns

The Browns offense, like in every phase of their team, has been inconsistent on the ground. However, second-year running back Nick Chubb is averaging over 100 rushing yards per game and 5.3 yards per carry, both figures are in the top ten in the league at the moment.

Kitchens’ running game schemes are excellent, and he implements some creative designs that build off of their option game with Mayfield. On the play above, the Browns ran a pin-pull sweep out of the pistol, and you see how Mayfield holds the backside force defender because of the threat of a quarterback keeper (#42). Chubb does an excellent job of reading the flow of the defense, and one-cuts upfield to daylight for a 52-yard gain.

The Patriots defense will have to be ready for both Chubb, one of the best yards after contact backs in the NFL, and the zone schemes that are staples of Kitchen’s offense.

2. How Will the Patriots Match Up on Odell Beckham and Jarvis Landry?

The matchups in the secondary for the Patriots defense this week are a little tougher than usual. Putting Gilmore on Beckham makes for a juicy matchup and seems like the best option, but Landry is a bit more complicated. Landry plays out of the slot on 70.5 percent of his snaps, but he’s a bigger slot receiver that regularly wins in contested catch situations. At 5-11, Landry has a few inches and some girth on Pats nickel corner Jonathan Jones. Jones is excellent, and would undoubtedly hold his own against Landry, but it wouldn’t surprise me if the Patriots put the bigger Jason McCourty on Landry at times. Jones might be a better matchup for the speedy Antonio Callaway in those situations.

Studying the Browns coverage schemes, they do sprinkle in some man coverage, but most of what they do is a Carolina style quarters hybrid from Steve Wilks’s days with the Panthers.

To beat that coverage, expect the Patriots to try and flood Cleveland’s zones by sending three or more receivers into one side of the coverage.

Seattle ran a flood concept against quarters coverage to stress Cleveland’s secondary sending two receivers into the deep fourth of the field where there is only one defender.

The deep defender stays on top of the go route, which is designed to clear out the coverage, and the flat defender widens to take the running back. The tight end is wide open for a touchdown on the wheel route, but Wilson decides to scamper for the score instead. Brady won’t run like Wilson, but he’ll make the proper read to the tight end.

McDaniels is great at calling flood concepts and other zone beaters, especially in the red zone, so expect to see a few on Sunday afternoon.

4. Is a Blocked Punt Coming for the Patriots Special Teams?

Lastly, the Seahawks blocked a punt against the Browns, and the Patriots already blocked two punts this season.

On the block, the Seahawks overloaded the right side of Cleveland’s protection. They then sent two rushers through the B-gap while slanting one of the rushers to create a two-on-one with the personal protector. The rusher from off the line of scrimmage comes free to block the punt.

The Patriots definitely pick up on the weaknesses in Cleveland’s punt protection unit and try to take advantage.