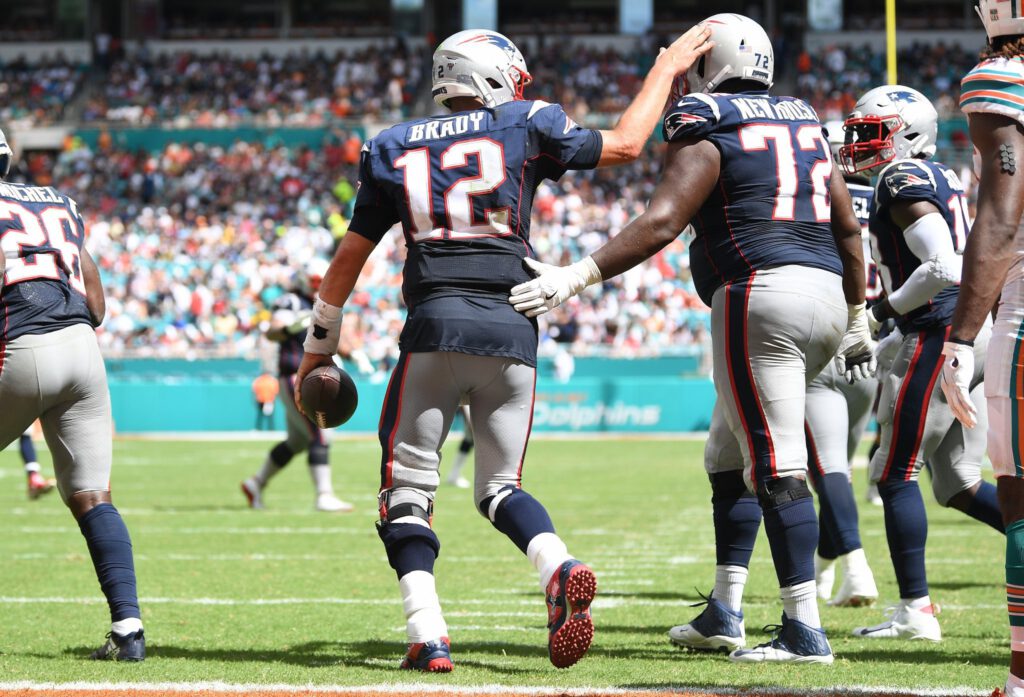 FOXBORO — The Patriots offensive line following Isaiah Wynn’s latest trip to the injured reserve is the biggest storyline surrounding the team outside of Antonio Brown.

Starting right tackle Marcus Cannon might return on Sunday against the Jets, and if it’s not Sunday, he’ll be back shortly. But the Patriots will have multiple backups protecting Tom Brady.

There are two plausible combinations that Dante Scarnecchia and the Patriots could go with over the next eight-plus weeks without Wynn.

The first one allows four-fifths of the line to stay put, and a one-for-one switch with Marshall Newhouse at left tackle. This is the ideal scenario since it keeps the continuity along the line as intact as possible, but Newhouse has to hold up his end of the bargain.

The second combination is if the team is concerned about Wynn’s availability at the end of the season or Newhouse’s play. As it stands right now, starting left guard Joe Thuney is the best option at left tackle on the active roster. However, this would put two backups on the interior with Ted Karras already at center.

We’ll see what the Patriots decide against the Jets this week, but Newhouse at left tackle is the cleanest option to avoid changes at multiple spots.

That brings us to the next part of the equation: how do the Patriots get by with a backup protecting Brady’s blindside, whether that’s Newhouse or someone else.

The Patriots are masters at preparing for these kinds of scenarios and did a lot to help out both Newhouse and Korey Cunningham last week against Miami.

The most common way the Patriots will help out their tackles is by using their tight ends to either chip or stay in to block.

Here, the Patriots faced a third and five from the Miami 19-yard line. They help Newhouse out on the left side by leaving Izzo in to block. Izzo pushed Dolphins pass rusher Vince Biegel past Brady allowing him to step up in the pocket and find James White for a first down.

The Pats will also chip with the tight end as he releases into the passing pattern to make life easier on their tackles.

This time, Newhouse is at right tackle before the Wynn injury. LaCosse lands a quick punch to slow down Avery Moss before releasing into the flat both stalling Moss’s momentum and making it more difficult for him to turn the corner. The ball is out quickly, but you see the technique.

The downside is that only four receivers are in the route combination, or if the tight end chips, he’s usually only going to release into the flat.

But with Julian Edelman, Josh Gordon, Antonio Brown, Phillip Dorsett and the running backs as the other pass catchers, it might not matter.

Similarly to the tight ends, the Patriots will also ask the running backs to chip on their way out of the backfield in the passing game.

On a third and 17 conversion in Miami, the Patriots knew that Brady needed some extra time in the pocket to let his receivers get past the sticks. Both James White and Rex Burkhead were in the backfield flanking Brady, and they chip the ends on their way out of the backfield giving Brady extra time.

The Patriots had their backs chip to help out the tackles several times in the win over the Dolphins.

The Patriots could also slide the protection towards the left tackle to protect them against speed rushers turning the corner.

Here’s a diagram of what that might look like from X&O Labs. By sliding the interior linemen towards the tackle, the left tackle doesn’t have to worry about an inside move, giving him a head-start on a speed rush.

Most slide protections involve either the tight end or running backs in the protection in some capacity.

Lastly, there’s the Tom Brady effect. Brady helps his tackles out in multiple ways, but the main ones are with a quick release and terrific pocket movement and awareness. Brady released the ball in less than 2.5 seconds on 61.2 percent of his throws and ranked seventh in average time to throw in the first two weeks (2.34 seconds).

We all remember Joey Bosa’s mic’d up segment from the Divisional round a year ago.

The other aspect of Brady’s game that helps out his tackles is his pocket movement. Not only does he step up and avoid edge pressure, but he’s also terrific at setting to a perfect depth on all his drops. Brady doesn’t drift back in the pocket, and his tackles know where he is based on the play call. For example, he’ll hit a five-step drop perfectly, making it easier to block for him.

“He makes tackles very comfortable. You can tell he’s a guru of the game,” Korey Cunningham said. “He knows where to be in the pocket. It makes our lives a lot easier.”

It comes as no surprise that having Tom Brady under center will help the Patriots make-do with their offensive line situation.

ON TO THE NEW YORK JETS

The Jets are winless and are one of the biggest underdogs of the Belichick era in Sunday’s clash at Gillette Stadium. No, they won’t pull off the upset.

With that said, New England’s makeshift offensive line will have a tough test against Gregg Williams’s scheme.

The Jets blitz 38.8 percent of the time, the seventh-most in the NFL, and Patriots head coach Bill Belichick noted the aggressiveness of the New York defense several times on Wednesday.

“They run a pretty good amount of blitz-man, and they add in quickly, so if the player blocks that the defender is covering, then he just adds in on the blitz,” Belichick told me. “So four or five becomes six, six can become seven in a hurry. They also have an overload blitz package, which compliments their single blitzers. But again, single blitzers often ends up looking like more than one blitzer because they get there so quickly on the add-in.”

“They have a good complimentary package, and it’ll be very challenging to not only our pass-protection and run-blocking schemes to get a hat on a hat, but also for the receivers to get open quickly and to make adjustments based on the leverage that they play those coverages with.”

Here are a few examples of the Jets blitz packages against Baker Mayfield and the Browns on Monday night.

The first example is of a single man-blitz with safety Jamal Adams rushing the quarterback. Adams runs across to the weak side of the formation away from the tight end, leaving him one-on-one with the running back in pass protection. Mayfield feels the blitz coming and has to get rid of the ball before his receiver is ready for the pass.

As Belichick noted, the Jets also have an overload package where they’ll send more defenders than blockers at the offensive line.

Against the Browns, they attacked the interior offensive line. The Jets ran a three-man interior cross blitz on the play above. The defense is in a double-A gap “mug front” with two standup linebackers on the line of scrimmage. They cross on the interior and safety Jamal Adams adds into the rush as well. It presents a four-on-four with the back in blitz pickup, but the center and the right guard fail to pass off Jets linebacker Blake Cashman. Cashman gets into Mayfield’s face and deflects the pass on the release.

“We are preparing hard and getting all the looks,” center Ted Karras said of the Jets’ blitz-happy approach. “It’s going to come down to me and Tom relaying the calls to the guys.”

The Patriots will have plenty of opportunities against man coverage on the perimeter with the Jets coming after Tom Brady. As long as the OL holds up, they’ll put up points in bunches.

– Le’Veon Bell is shaking off some rust, but he’s still incredibly dangerous. Discipline is critical in defending him as a ball carrier. You can’t lose contain or let him cut back because that’s where he’ll gash you. You need a pack mentality to get him down. As a receiver, I expect lots of Chung and even Jason McCourty in some situations on Bell. They’ll treat him as a premier receiving threat, not a typical running back.

– Luke Falk made solid decisions with the ball and showed adequate downfield accuracy. You can see his familiarity with the scheme on the field. His timing needs to improve, and a lack of arm strength limits his ceiling. He’s too limited to beat the Patriots, but he belongs on an NFL roster.

– The Jets offensive line is a major weakness. They have five replacement-level starters that can be exposed. Kelechi Osemele is their best, but he’s past his prime. He’s a physical player with the nickname “KO” for his knockout punches.

– Along with blitzing, the Jets defense will show one coverage pre-snap and then rotate into a different coverage post snap. That could disrupt the timing a bit of the Patriots option routes. For example, if the Jets show cover-2 before the snap, the route will be different if it rotates into cover-1 after the snap. The Pats receivers have to read leverages and coverages quickly on Sunday.

– The Jets injuries extend beyond “kissing” Sam Darnold. Starters C.J. Mosley (groin), Jordan Jenkins (calf) and first-round pick Quinnen Williams (ankle) are unlikely to play. Despite it being his first year on the team, Mosley might be the MVP of the defense. They cannot replace his communication skills and talent.