Patriots Game Plan: How the Patriots Offense Should Attack the Bills Defense 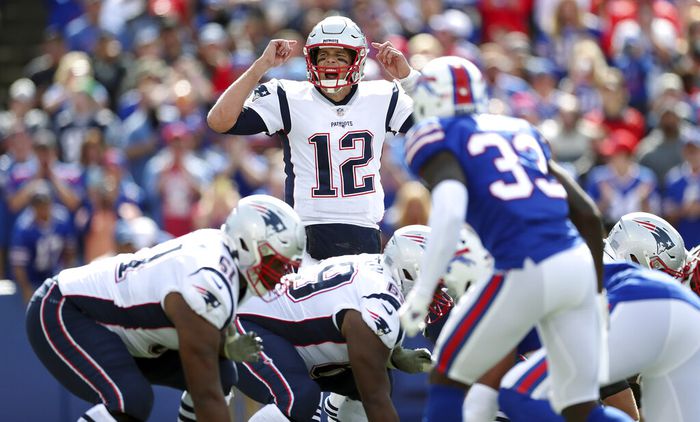 The last meeting between the Patriots and Bills was a forgettable game for Tom Brady and the Patriots offense.

Back in Week 4, Brady’s Pro Football Focus grade of 44.4 out of 100 was his worst single-game performance since the infamous Monday night massacre against the Chiefs in 2014.

The Buffalo defense, which ranks fourth in total DVOA and third against the pass, has a similar level of continuity in the secondary as the Patriots, and loads of talent too.

“You just don’t know exactly what you’re going to get schematically and they do a very good job of disguising what they do, so that they look the same, but they’re not the same, and they combine that with some defensive line movement and obviously some very good players,” he added.

Under head coach Sean McDermott, the Bills play zone coverage on nearly 68 percent of their snaps this season, but they don’t give the quarterback a clear pre-snap picture.

Brady likes to decipher the defense before the snap, and the Pats offense relies heavily on timing and option routes, where QB and receiver read out the coverage and adjust accordingly.

Against the Bills, those pre-snap indicators aren’t always what they seem, leading to more decisions after the snap.

On one of his four interceptions a week ago, Steelers quarterback Devlin Hodges ran into one of those disguises on third and 15. The pre-snap picture tells Hodges and the Steeler receivers that this is a single-high or post-safety coverage, mostly likely cover-one man or cover-three zone.

As we roll the play, Bills safety Micah Hyde drops to turn this into a quarters coverage with four defensive backs across taking a fourth of the deep field. Hodges throws up a go ball to James Washington, and Pro Bowl cornerback Tre’Davious White has an easy interception.

On the end zone angle, you’ll see a typical pass-rushing front for the Bills. McDermott will call some blitz-zones or stunt with four rushers. Buffalo plays most of their base snaps in a 4-3 over G, but on passing downs, they have a few different alignments with standup rushers. Here, they run a stunt to the quarterback’s right to pressure Hodges.

With a banged-up Brady and Edelman, and a stingy Buffalo pass defense, the Patriots should turn to their running game early and often, where the Bills rank 19th in DVOA defensively.

Although the personnel is very different for New England, a game plan that loosely resembles their Week 16 plan from a year ago where they ran the football 47 times makes sense.

In September, they threw the ball on two-thirds of their offensive plays, and we all know how that turned out.

In the 4-3 over G, the nose tackle is shaded over the guard instead of straight up on the center. The defense also has a three-technique tackle, and two wide ends.

McDermott took the defense from his time in Carolina with second-year linebackers Tremaine Edmunds and Matt Milano doing their best Luke Kuechly and Thomas Davis impressions.

There are several ways, like any defensive front, that you can attack the Buffalo’s base, and the Patriots used mostly gap runs to win a year ago on the ground and with their defense, which sounds like something they might want to do again.

Shaq was flat out bullying dudes on Sunday. One of the most violent pullers in the league. #Patriots pic.twitter.com/yYuarOoMSw

Last week against the Bengals, the Patriots offensive line built some momentum, feasting on a weak Cincinnati run defense. In particular, right guard Shaq Mason was devastating as a puller on power schemes, and those designs will come in handy again this week.

With the tight end in-line, the Buffalo front will leave the strong side “C” gap open, forcing someone at the second level to fill the hole on running plays, which gives the puller time to make his block. The Pats combo block the three-technique with the left guard and tackle, Gronk kicks out the end, Edelman climbs to the nickel, and Mason takes the linebacker. The Pats also incorporate jet motion to get the defense to bump over a gap, which makes it easier to fit on their blocks, and James White runs for a 27-yard touchdown.

#Patriots film: thought McDaniels designed the run game well vs Cincy. Here's the effect of jet motion, watch #50. #Bengals are in zone, so the LB becomes responsible to contain Harry on the jet. Pull the backside guard, and because of the motion, there's nobody there to fill. pic.twitter.com/2JYvzdXIeY

Along with pulling power plays, the Patriots incorporated jet motion into their rushing attack in a similar vein a week ago against the Bengals.

The Bills defense will also often leave a juicy “B” gap open on the line of scrimmage. Most of the time, it’s away from the tight end, but this time the Pats get Buffalo to leave the strong side uncovered. Fullback James Develin leads on an isolation play, where the left side fans out the nose tackle and end to give Develin a free shot at the linebacker in the hole.

Although the Pats had success with gap runs, Buffalo is having difficulties defending zone runs more than gap schemes this season, especially out of the gun where opponents average a league-high 6.6 yards on 65 attempts.

Believe it or not, the Washington Redskins and Adrian Peterson had success on the ground against the Bills in Week 9. Peterson had a few positive runs on shotgun zone handoffs.

Without a full-time fullback, the Patriots could go in this direction to still feature the running game but avoid the fullback plays.

The Redskins ran a split-flow zone on the play above, and Peterson hits the A-Gap on the three-technique side of the line. With the nose tackle shaded over the left guard, it leaves an opening there, and right guard Brandon Scherff clears out the three-tech, and the center climbs to the second level with the left guard picking up the nose.

As the play shows, the young Buffalo linebackers are talented, but they’re prone to mistakes against misdirection plays. They can be undisciplined at times, as Milano was there pinning himself by following the tight end instead of the ball, finding himself out of position.

The Patriots’ running game isn’t what it was a year ago, but they have a much better chance against the Bills defense on the ground than through the air.

WHEN THE BILLS HAVE THE BALL: PATRIOTS WILL BLITZ JOSH ALLEN

On the defensive side of the ball for the Patriots, Bill Belichick will mostly come after Buffalo quarterback Josh Allen, who hasn’t proven he can perform under duress in his NFL career.

Out of 33 qualified quarterbacks, the seventh overall pick in the 2018 draft ranks second-to-last in Pro Football Focus Grade while under pressure (30.4 out of 100).

Allen struggles against all types of pressure but might be at his worst against the blitz, where his 47.5 grade ranks 33rd out of 36 qualified quarterbacks.

In Week 4, the Patriots rattled Allen with the Buffalo quarterback admitting since that he wasn’t ready to face a Belichick defense. The Pats blitzed him 14 times, cycling through their man blitzes and cover-zero bluffs, where they show blitz then back off into coverage.

The second-year quarterback’s decision making becomes erratic when he is under duress in the pocket.

Last week against the Steelers, Pittsburgh blitzed Allen 14 times. On this play, they bring both linebackers up the middle, and it seems like Buffalo has an open “hot” receiver with John Brown crossing over the ball. Instead of calmly hitting Brown, Allen throws the ball up to nobody.

The Ravens also took from Belichick’s blueprint, bringing the heat on 31 of Allen’s 46 drop-backs. The Bills quarterback struggled mightily to hit open receivers with free runners coming at him, posting a 55.8 passer rating against the blitz in the game.

Allen admitted that the Patriots defense overwhelmed him in the first meeting, and used that game to fuel him moving forward. Many Bills observers call it a turning point in his season.

We’ll see if he’s ready for Belichick’s scheme this time around.

OTHER NOTES ON PATRIOTS-BILLS

The Patriots didn’t see the rookie running back the first time around, but Singletary is taking over as the lead back and has 28 catches on the season. Buffalo offensive coordinator Brian Daboll will flex him out either out wide or in the slot in the passing game as well. His three-down ability brought on more no-huddle, which the Bills used extensively in Weeks 13 and 14. Plus, his versatility lets Buffalo go empty as well, where Allen is maybe most comfortable. Expect Daboll to try to get Singletary isolated on a Patriot linebacker at some point.

2. Patriots Matchups in the Secondary Without Jon Jones

The Patriots will need to do some shuffling in the slot with Jon Jones sitting this one out due to a groin injury. Jones would’ve drawn Buffalo slot receiver Cole Beasley, who, along with John Brown, were key free-agent additions that are playing well for the Bills. Gilmore will mostly likely draw Brown again as he did in Week 4, which leaves JC Jackson, Patrick Chung, or potentially a healthy Jason McCourty to take Beasley. The Pats will also have to think about tight ends Dawson Knox, Lee Smith, and Tyler Kroft. The trio all played at least 17 snaps against the Steelers. Could we see some big dime or even four-safety looks? It makes sense with Chung as the nickel, and the extra safety could cover tight ends and backs or blitz Allen.