Patriots Game Plan: Pats Need to Stick to Their “Bread-and-Butters” vs. Falcons

The Pats need to take care of business on a short week. 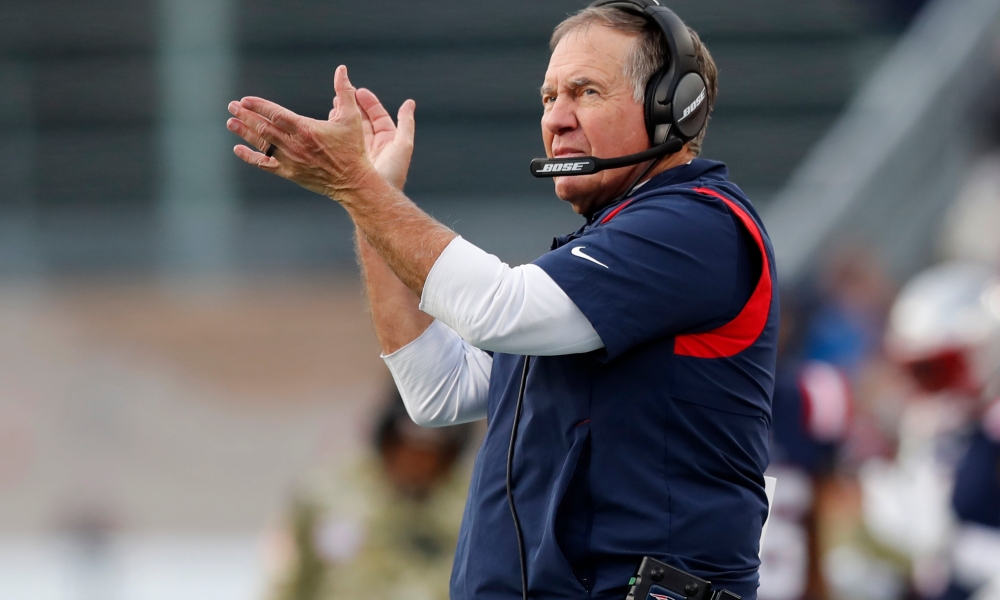 The key to winning a road game on Thursday Night Football is to stick to your bread-and-butter.

As Patriots head coach Bill Belichick likes to say, the minute the Patriots came off the field after their impressive dismantling of the Cleveland Browns on Sunday, it was Wednesday night.

With the Patriots typically preparing for a Sunday game, they’ll have a lightning-quick turnaround with only one on-field practice and three days to prepare for the Atlanta Falcons.

Atlanta is short-handed due to injuries (Cordarrelle Patterson) and mental health issues (Calvin Ridley) taking two of Matt Ryan’s best weapons off the field. Still, they’re an unfamiliar opponent who has found a way to stay competitive (4-5) despite a flawed roster.

New England has to recover quickly from Sunday’s win, lean on their core concepts while anticipating the Falcons to stick to what they do, and, most importantly, avoid a letdown.

Returning to our bread-and-butter theme, the Patriots are establishing an identity in their four-game winning streak that Belichick envisioned when he built the roster in the offseason.

The Pats’ football czar constructed his team to out-muscle their opponents in the trenches and rebuilt pieces of the offensive line and front seven to be a physical football team.

Last week, the Patriots overpowered a Browns team that was similarly assembled to win on the line of scrimmage on both sides, with Cleveland investing considerable resources in the trenches.

Defensively, the Pats adjusted after Cleveland’s opening drive to hold the Browns to 41 rushing yards on their final 15 carries and pressured the Browns’ QBs on 42.1% of their drop-backs.

Although Belichick is the ultimate game-planner, Thursday night’s game for the Patriots is about playing their brand of complementary football while keeping tabs on a few key Falcon attributes.

In other words, New England isn’t going to reinvent the wheel here with just a few days to prep.

Given the talent and execution discrepancies, if the Pats execute the formula that has led to their four-game winning streak, they’ll take care of business in Atlanta on Thursday night.

Here’s a crash-course on how the Patriots could game-plan for the Falcons this week:

The one familiar face on the Falcons coaching staff is veteran defensive coordinator Dean Pees, who was the defensive play-caller for the Patriots once upon a time (2006-2009).

Pees was obviously running Belichick’s system back then, and there’s some carryover in his current scheme, but Atlanta is primarily a cover-two zone system (36.5% of coverage snaps).

Like any NFL defense, Pees mixes it up, incorporating post-safety structures with cover-one (25.4%) and cover-three (22.7%) on a bulk of their snaps, which looks very Patriot-like.

The dangers with Pees’s defense come with his exotics in obvious passing situations, where he harkens back to his Belichickian roots to spin the dial post-snap and run stunts in the pass rush.

The Falcons show a single-high structure in what looks like cover-one man with a mug alignment threatening a blitz in this play. At the snap, they back off, and the slot defenders rotate into a cover-two shell. Panthers quarterback Sam Darnold had no idea where to go with the ball.

Pees’s pressure package includes exotic twists as well. Above, they run a replacement pressure where the mugged linebackers run a stunt blitz while the edge defender drops off into coverage on the running back. Darnold makes the proper decision, but the pressure forces a bad throw.

Luckily, Patriots rookie quarterback Mac Jones is better at deciphering defenses than Darnold, and the Pats have a superior offensive line than Carolina (just look at the Week 9 matchup).

Here’s one example of how the Patriots will attack Atlanta’s exotic calls. Jones sees the late rotation with a similar dropoff by the mugged linebackers into a cover-two zone in this play. By reading the zone-droppers in the middle of the field, he works a matchup with a linebacker taking tight end Hunter Henry. Henry and Jones execute a leverage-based throw flawlessly, with Henry opening away from the zone-dropper and Mac’s quick-release beating the coverage.

Another way McDaniels will help Mac out with the Falcons’ coverage disguises is by using pre-snap motion indicators. Henry motions before the snap in the play above and isn’t followed by the defense. That’s a zone indicator for Mac, who can anticipate that the Browns will drop their linebackers off the line rather than blitz. Jones knows he has Meyers one-on-one against a single-high safety and attacks the matchup on the fade for a third-down conversion.

Although the Falcons are mainly a zone coverage defense, Pees has man coverage in his bag, and Atlanta will try to play press-man to disrupt the timing of the Pats’ routes.

When the Falcons play man coverage, expect the Patriots to attack it with levels concepts for Mac to throw off the inside help defenders and attack single-high structures up the seams.

For example, Jones converts on third down to Kendrick Bourne by reading the “rat” defender rotating into the box. When the help stays inside for the second in-breaker, Mac waits for Bourne to clear the help defender and throws him open on the other side of the robber.

Watching Atlanta’s defense on tape, there also was plenty of open space up the seams, giving the Patriots the option to run day-one install stuff like HOSS Z Juke or similar concepts to Kendrick Bourne’s highlight-reel touchdown catch from Sunday’s win over the Browns.

Atlanta is more vulnerable against the pass (30th in DVOA) than the run (22nd in DVOA), but the Patriots have to feel good about sticking to their core rushing schemes as well.

We’ll see plenty more lead plays with the fullback, power, counter, and duo behind the Shaq Mason-Trent Brown tandem on the right side of the offensive line.

Again, it’s bread-and-butter week, and the Falcons happen to rank dead-last in DVOA against passes to the middle of the field; happy hunting for Mac Jones and the Patriots offense.

WHEN THE FALCONS HAVE THE BALL

As we mentioned, Atlanta will likely be without two key contributors in wide receiver Calin Ridley (personal) and offensive weapon Cordarralle Patterson (ankle) on Thursday night.

Without Ridley and Patterson, that leaves the following arsenal for Matt Ryan to go up against the fifth-ranked pass DVOA unit in the NFL this season in the red-hot Patriots defense: TE Kyle Pitts, TE Hayden Hurst, WR Russell Gage, WR Christian Blake, and RB Mike Davis.

This is an absolute mismatch on paper and another matchup where the Pats’ defensive front can man-handle a Falcons offensive line built on athleticism rather than pure power.

Smith will mix it up with some counter schemes, but his roots are in the wide zone/bootleg play-action system that is taking over the NFL thanks to McVay, Shanahan, and LaFleur.

Atlanta will try to get the Patriots’ big defensive tackles and linebackers into side-to-side foot races, which the Pats need to avoid by pushing a lighter O-Line backward at the snap and overwhelming them with power.

The Falcons’ head coach will then compliment outside zone by sequencing together play-action, with Ryan having one of the biggest play-action versus non-play action splits in the NFL.

With those play-action concepts, Smith uses talented first-rounder Kyle Pitts on a series of crossers and “burst” corner routes that get Pitts isolated and put defenses in a bind.

The Pats defense is now well-versed in these schemes after facing them against Cleveland and Carolina, and you can expect a similar early-down formula (cover-three or cover-two zone with five-man fronts).

Here, New England’s defenders on the line of scrimmage engage the Panthers’ offensive line quickly to keep the linebacker level clean and add on edge force with their defensive backs. The aggressiveness along the defensive line builds a wall, and they close off the bounce around the corner to stop the Panthers’ running backs in their tracks.

The Patriots used their deep safeties to cut off the crossing routes to combat the crossers off play-action. Above, Devin McCourty jumps the crosser from his post-safety position, and the backside corner (Joejuan Williams) helps J.C. Jackson leverage the deep post.

New England also used cover-two structures to leverage the crossers on bootleg actions and pressured Darnold on the rollouts to hurry his throws and force mistakes.

If Ryan had his full complement of weapons, the Falcons’ spread schemes on early-downs could give the Pats defense some issues if Atlanta moves away from the early-down under center run/play-action sequencing.

The former league MVP is still accurate and a good decision-maker. Ryan hasn’t lost a step yet, and you aren’t going to fool him as easily with coverage rotations as the Pats did against younger QBs. 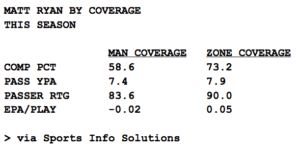 When Atlanta goes to their spread game, we expect the Patriots to play man coverage and pressure Ryan with a physical pass rush because savvy vets pick apart zone coverages.

We’ll get into how they’ll match up on Kyle Pitts in those situations in the next section.

Although Belichick only does it against unique talents, he’ll occasionally put a corner on a premier receiving tight end. Even in his rookie season, Pitts is on that level. Last week, the Cowboys put top corner Trevon Diggs on Pitts quite a bit, and we expect Jackson to draw Pitts on third down and when Pitts is detached from the formation. It’s a good matchup for J.C., who can use his physicality and play to his inside help to take Pitts out of the game. As we all assume, it’s going to be an “anybody but Pitts” mentality for the Pats defense this week.

Every Patriots fan remembers Jarrett, who might’ve been Super Bowl MVP if the score held in Atlanta’s favor, from Super Bowl 51. The two-time Pro Bowler can still ball. Thanks to his get-off and flexibility, he’s an explosive playmaker who blows up running plays and is still an elite one-on-one pass-rusher. Jarrett is a game-wrecker, and he’s going to hunt for inside pressure to throw Mac Jones off his game. The Pats’ interior O-Line can’t let that happen.

Although it’s not all on Barmore to control the line of scrimmage, it’ll be fun to see how he fairs against an elite guard in Lindstrom. The Pats might try to move Barmore over to left guard Jaylen Mayfield, a matchup he can feast on, but we want to see best-on-best for the entertainment factor. If Barmore can beat Lindstrom, his stock will rise through the roof.